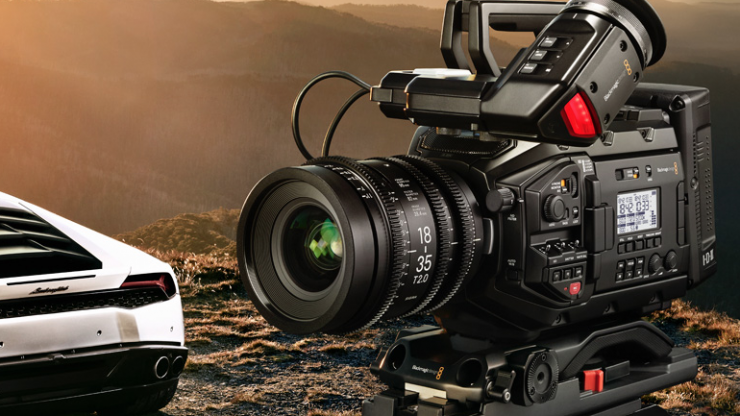 Blackmagic Design have today announced the URSA Mini Pro, a new camera which takes a lot of the existing technology from the URSA Mini 4.6K and improves on it. The camera looks to be designed with the solo operator in mind, as most of the new features that have been included make the camera more suitable for ENG and documentary style work.

While the URSA Mini Pro doesn’t look that dramatically different to the URSA Mini, it is interesting to see that Blackmagic have implemented a range of tactile control buttons, switches, knobs and dials that users of ENG cameras will be right at home with. In fact almost all the physical switches have been positioned in places where you would traditionally find them on a ENG camera.

The biggest addition without a doubt is the inclusion of built-in ND filters. This is something customers have been asking for ever since the original URSA was released. The ND is controlled using a traditional filter wheel that you would find on a ENG broadcast camera. There are four positions available: clear, 2 stops, 4 stops and 6 stops. According to Blackmagic the ND filters have been designed to filter both optical wave lengths and IR wave lengths evenly to eliminate IR contamination of the images that most ND filters can suffer from. 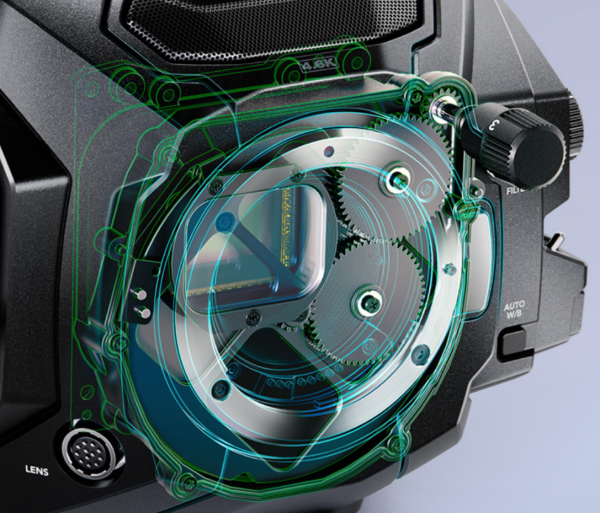 What is also nice is you can display the filter settings as either an ND number, stop reduction or fraction on the LCD and VF.

The other big news is that the URSA Mini Pro has user swappable lens mounts. The camera will ship with a Canon EF mount, but you will have the choice of purchasing PL, B4, and for the first time a Nikon mount. Users can swap the mount by removing screws on the front of the camera with a torque wrench in the same way that you change a mount on the Arri Amira/Alexa Mini or AJA CION.

The Nikon mount, which won’t be available till later this year, has a built in aperture control ring on the back of the mount so you can make smooth iris adjustments.

To Blackmagics credit the cost of the mounts is extremely affordable. The PL mount will cost $245US, and the B4 is $385US. There is no pricing on the Nikon mount at this stage. The Pl mount does lens communication using Cooke’s /i Technology so metadata can be embedded from using compatible lenses.

When it comes to the media slots, the Ursa Mini Pro has four. There are dual C-Fast 2.0 and dual UHS-II SD card recorders. Just like the URSA Mini when the first card is full, it automatically continues onto the next card. Despite having four card slots it can’t dual record or record RAW on one card and ProRes on the other.

Blackmagic will also be offering an optional SSD recorder that slots in between the camera body and the battery that will allow users to record long run times.

There is also a physical on/off switch which has replaced the push button power switch that was found on older URSAs. 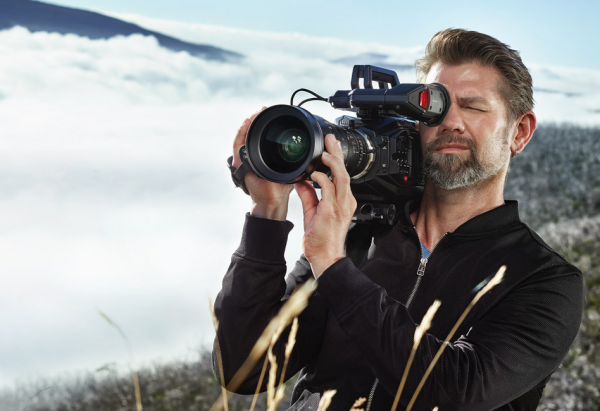 The camera also allows for electronic control via EF mount pins or 12-pin broadcast connector for compatible lenses. The 12 pin connector means you can power and operate both B4 broadcast ENG lenses as well as some of the newer PL cinema zooms that use a servo driven motor. 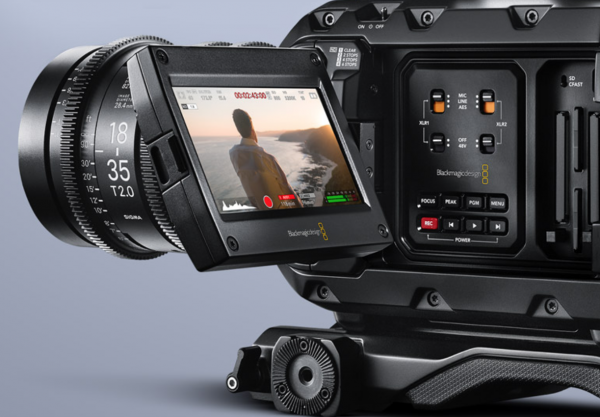 There is a new 4″ flip out LCD screen which is slightly smaller than the 5″ one found on the URSA Mini 4.6K.

The side LCD panel is black and white so it is easier to read in bright, sunny conditions. It also features a backlight for use at night. The status display shows record timecode, locked timecode and reference timecode, along with the current shooting frame rate, shutter angle, aperture, white balance, ISO and IRIS. It also features a battery indicator, card recording status and audio meters for monitoring levels. The side LCD panel is a big improvement and gives you information that you can clearly see without having to open up the flip out monitor.

Users of the camera will be elated to hear that Blackmagic have now added a designated HFR (high frame rate) button. This will allow you to set a different frame in the menu system that you can then assign to the button. As soon as you press the HFR button the camera will instantly change to this frame rate. I would imagine that you would not be able to go from normal speed to the 120fps cropped window mode by just pressing this button.

There is also a frame grab button for capturing still images, but unfortunately at launch this feature will not be enabled. According to Blackmagic Design it is still undergoing beta testing at this stage. 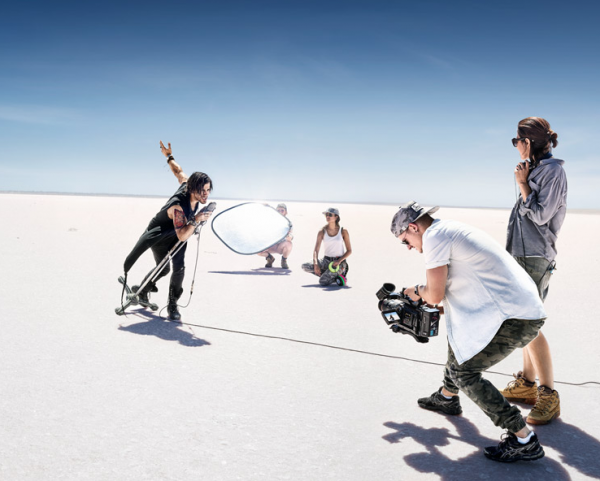 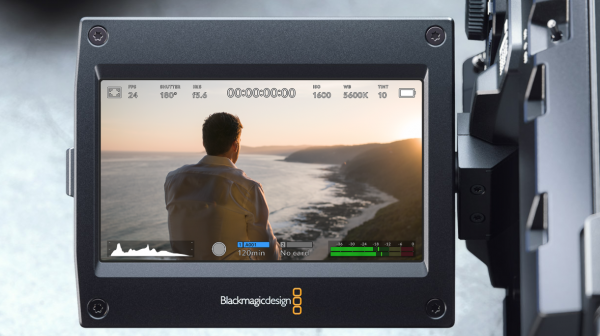 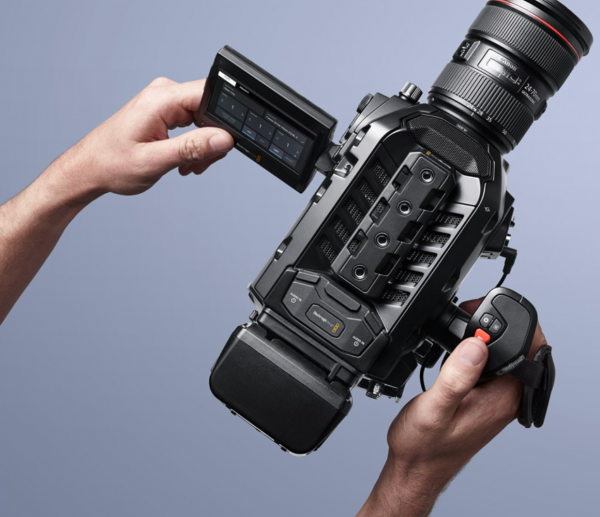 Connections on the camera include 12G-SDI and separate HD-SDI video outputs along with 12V power for connecting electronic viewfinders. For audio, there are 2 XLR balanced analog inputs with 48V of switchable phantom power for external microphones. . URSA Mini Pro also includes a Hirose 12-pin lens control connector, LANC, a standard 4 pin XLR power connector and URSA battery plate internal power connector that lets you mount battery plates on the rear of the camera.

The camera will support 4 channels of audio recording, although channel 3 and 4 will not be available when the camera first starts shipping. Blackmagic indicated that this feature is still undergoing beta testing. The company has also said that they have worked hard on upgrading the camera’s sound capabilities, and they are now using better pre-amps for lower noise. What is also nice is that you can physically see your audio meters on the side of the camera instead of having to open up the screen to see them on the flip out display. 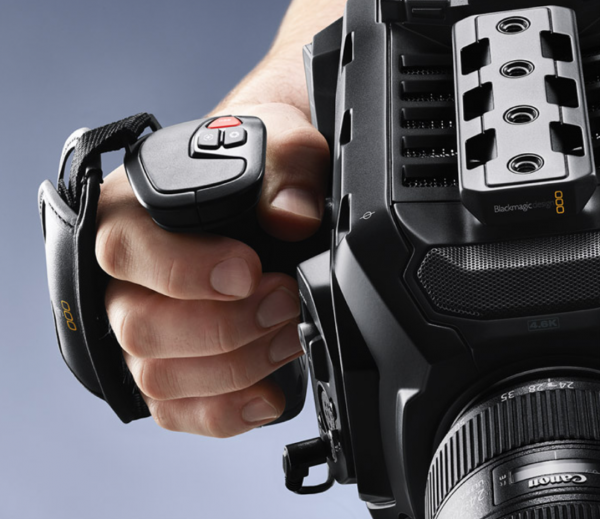 In a first for Blackmagic cameras, you can actually purchase one today. The price is $5995US, which is $1000 more than the URSA Mini 4.6 EF mount. The camera ships with with the side hand controller and the full version of DaVinci Resolve.

For owners of the original URSA (it is not clear whether this applies to the URSA Mini non 4.6 version as well) you will be able to upgrade to a URSA Mini Pro for $3495US. All you need to do is provide proof of purchase of your URSA. According to Blackmagic that $3495US price gets you a new URSA Mini Pro and you still get to keep your old camera. UPDATE: We spoke to Blackmagic and this offer only applies to the original URSA and not for any vision of the URSA Mini. 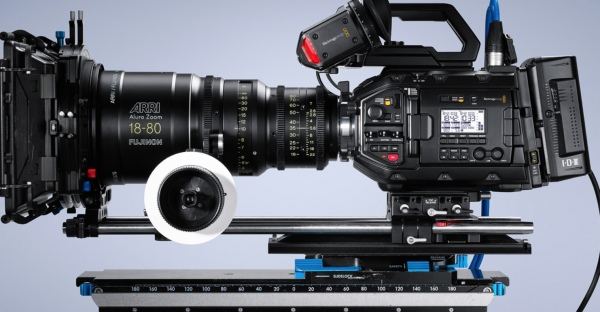 While the URSA Mini Pro certainly inherits a lot of the features from the URSA Mini 4.6K, it is more of an evolution of an existing camera rather than a brand new one. The added internal ND filters, user changeable lens mounts, and the redesigned switch lay out all look to make this camera a much more appealing option for a lot of shooters who were perhaps looking at the Sony FS7 and Canon C300 Mark II.

Without having seen the camera yet I think Blackamagic have done a very good job at listening to customer feedback they received from current URSA Mini users. Rather than giving us a brand new camera Blackmagic have made a lot of changes that have made an existing camera platform even better. The design implementations look to make this camera very well suited to a lot of applications, particularly ENG and documentary work.

Lens Mount
EF Mount (Interchangable with PL and B4 mount)