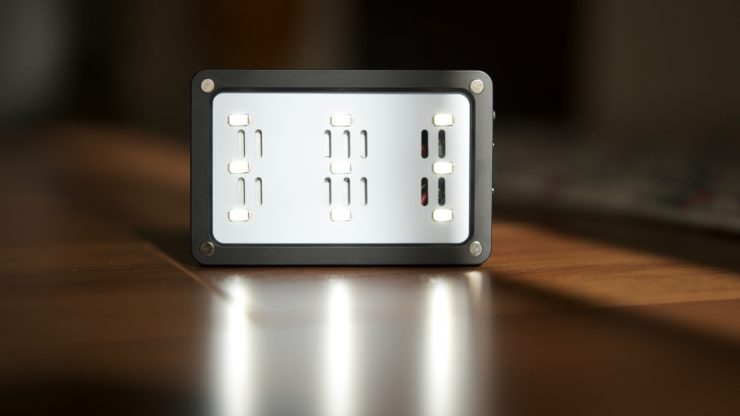 Aputure have quietly been establishing a reputation for making very affordable yet highly colour accurate LED lights. One of these lights is the tiny on or off-camera LED fixture called the Amaran M9 that was announced early in 2016. It is a daylight 5500k balanced LED light that has been designed to be so small and compact that you can keep it in your pocket.

The Amaran M9 weighs just 140g (4.9oz) and is the same size as most credit cards. The beauty of having a light that is so small is you can carry it on you at all times. When you need a small catch light for someones eyes or a small source that can be hidden in your shot the M9 can be a very handy addition to your lighting arsenal. 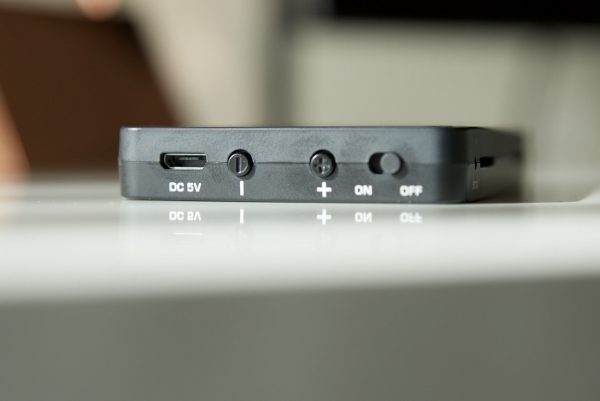 There is not a lot to the M9, with just a basic sliding on/off switch and two buttons for increasing or decreasing the brightness. Unlike some other light where you can completely control the lights output in small increments the M9 only gives you the ability to control the brightness in 9 steps. I didn’t however find this to be a problem when using the light. 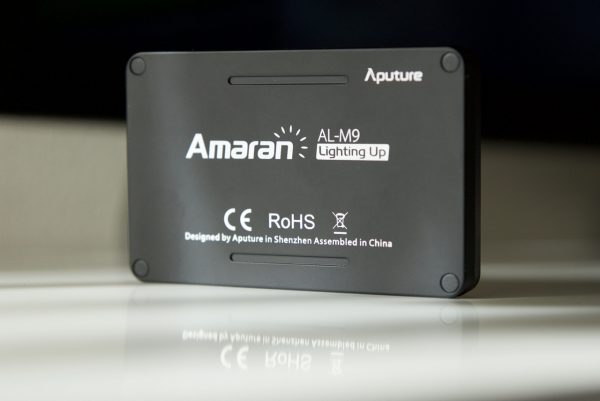 Given the lights low weight you may well be fooled into thinking that you would need to hook it up to a battery to power it on. This couldn’t be further from the case as Aputure have integrated a 1800mAh lithium polymer battery into the fixture itself. This battery can be re charged using any USB device that is capable of providing 5V. Aputure claim that the battery will run the M9 at full power for 1.75 hours, and from my tests I found those figures to be fairly accurate. It does however start to slowly dim down by itself after around 1.5 hours till it eventually loses power all together. Charging time is quite slow at around 3 hours so you may well want to have an external USB power source with you if you want to use the light for extended periods of time. 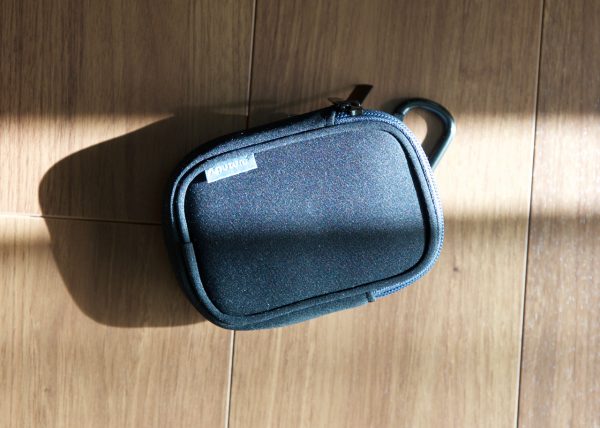 The M9 comes in a nice little padded soft case that has a carabbener on it which makes it handy for attaching onto your belt or hanging it off a bag. I did however find myself just keeping it in my pocket a lot of the time. Not only do you get a soft bag but Aputure also include a mount adapter for mounting the light to an accessory cold shoe, or you can remove the cold shoe foot and mount the light to a 1/4″-20 accessory mounting point. They also include a USB charging cable, a magnetically attached diffusion filter, CTO filter, CTB filter, and diffusion filter. 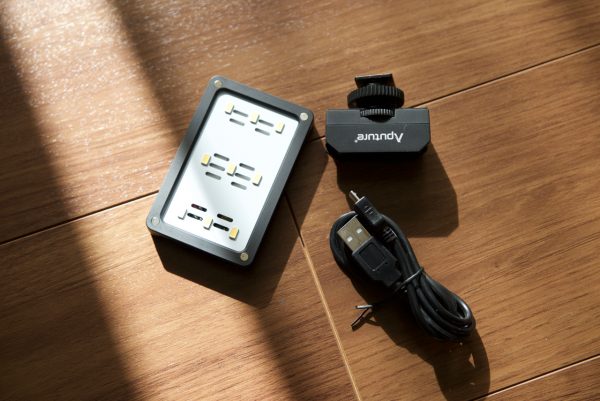 Aputure are certainly not the only company to make a LED light in this style with other manufacturers such as Aladdin making fixtures such as the A-Lite and Eye-Lite. 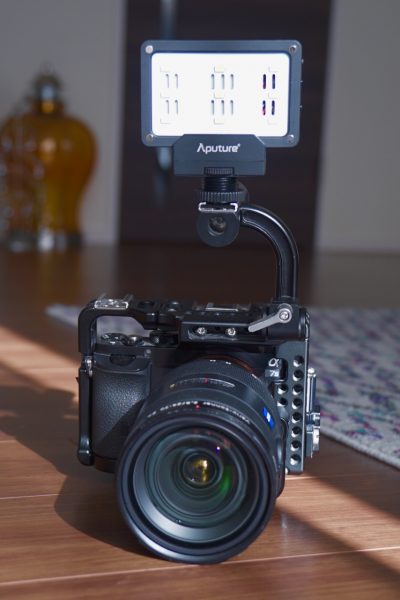 You would think given the size that the M9 would be most at home as a top light on board smaller mirrorless or DSLR cameras, but I found myself using it more often that not for other purposes. I tended to use the light for illuminating objects or small areas in a scene where I needed to hide the fixture. I also found that the light worked well as a fill light in interview situations when used with some diffusion.

Despite its small size the M9 has a really wide 120° beam angle which I personally think is one of its biggest strengths. A lot of smaller LED lights can have narrow beam angles, and the ones that are wider tend to fall off very quickly and create a very spotlight like appearance.

The wide 120° beam angle is also helped by the lights output, or lack of it to be more precise. In most circumstances its normally adventitious to have a light with a lot of output. The more light you often have the easier it can be to diffuse and you can always just dim it down if you need less. With a small fixture that has a wide beam angle you don’t usually want to have it too bright otherwise you can end up creating a lighting source that looks very artificial. The M9’s lack of output actually helps and not hinders the lights usefulness. 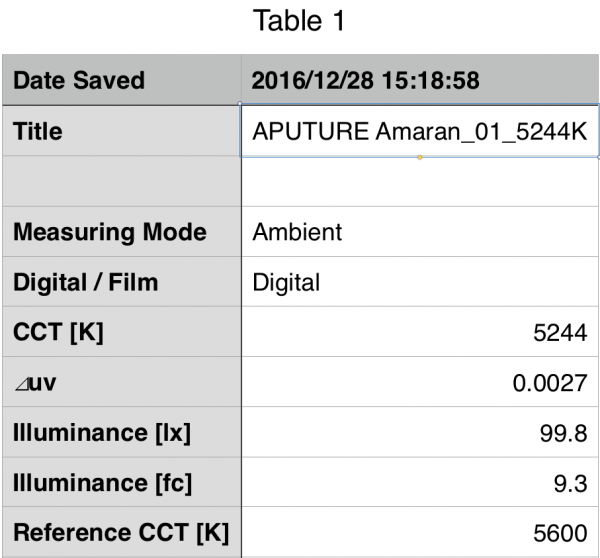 I tested the Amaran M9’s output using a Sekonic C700 and above you can see the results I got. As you can see the M9 is only capable of outputting 99.8lx at a distance of 1 meter when used with no diffusion. While this may be a relatively low output when compared to a lot of other on camera LED lights I found it to be more than enough for the purposes I would use it for. The Aladdin A-Lite for example has more than double the output of the M9. If you do however want to use it exclusively as an on camera light you may well find that it doesn’t provide enough light in certain shooting scenarios. 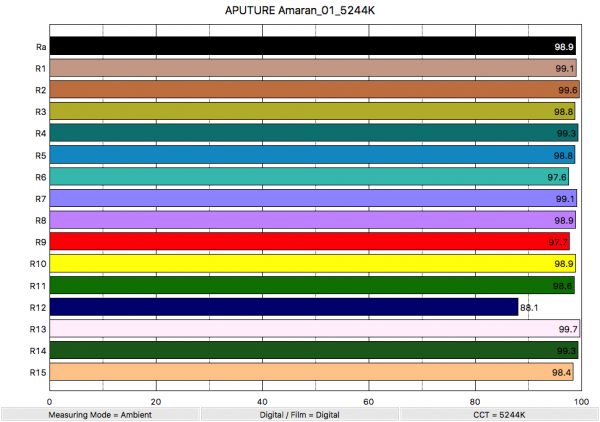 While the output may appear low the light colour rendering scores are extremely high. Above you can see the M9 recorded an average CRI (R1-R8) of 98.9 and an extended CRI (R1-R15) of 98.1. For the all important skin tone colour accuracy it scored 97.7 for R9 (red), 99.7 for R13 (closest to caucasian skin tones), and 98.4 for R15 (closest to asian skin tones. Theses scores are about as good as you are ever going to get for a LED light. In saying that it is important to note that it is a lot easier to create a smaller LED light source (especially at a fixed kelvin temperature) that is very colour accurate as opposed to a lot larger one. 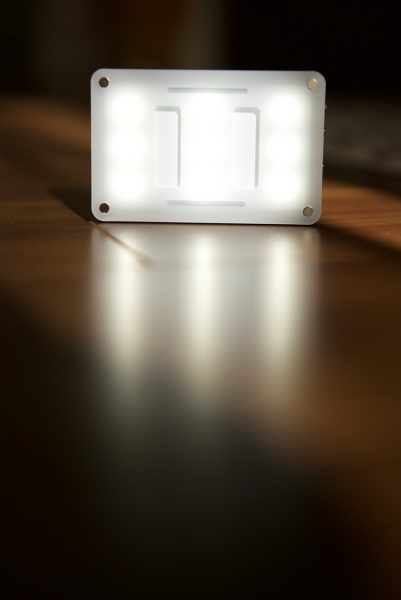 Not only does the light score very highly with colour rendering but it is also reasonably good at replicating its advertised kelvin colour temperature of 5500k. My tests recorded a kelvin temperature reading of 5244k and a ⊿uv ((the value to show how much this light is away from being an ideal light source (black body radiation = incandescent lamp) of 0.0027. 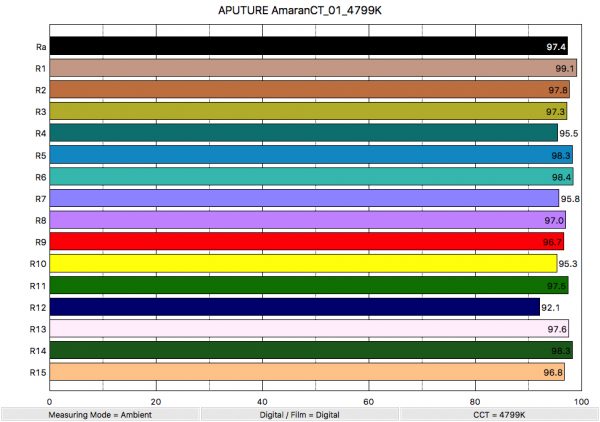 As the M9 is a daylight only LED light, I also wanted to test it with the included CTO filter to see how the light performed if you wanted to use it as a tungsten light source. From the results above you can see that the light still performed very well which was a bit of a surprise as most LED lights I have tested that come with a CTO filter have been horrible. The M9 recorded an average CRI (R1-R8) of 97.4 and an extended CRI (R1-R15) of 96.9. For skin tone accuracy it was also excellent with scores of 96.7 (red), 97.6 for R13 (closest to caucasian skin tones), and 96.8 for R15 (closest to asian skin tones). 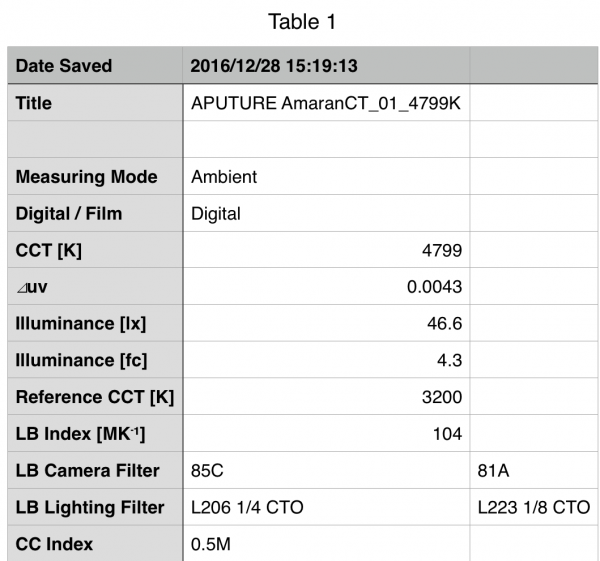 With the CTO filter attached it did however drop the lights output down to just 46.6lx at a distance of 1 meter. Aputure claim that if you use the CTO filter it should drop the lights kelvin temperature down to approximately 3400K. My testing however indicated that the kelvin temperature was actually 4799K. This is just something to keep in mind if you plan on using the light to replicate a tungsten source. 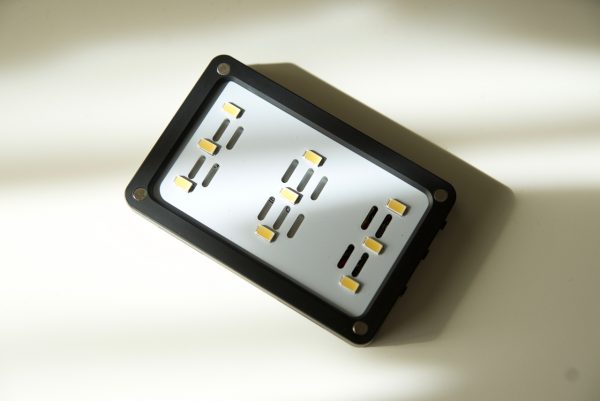 The Amaran M9 is an interesting light that is rather niche in a lot of ways. Its small compact size makes it easy to carry around and you may well find yourself using it for a lot of applications that it was not originally designed for. More often than not I found myself using it when I was taking photos on my iPhone or when I needed a light to look inside my bags at night time. It’s this versatility that made the M9 such an appealing light for me. I love products that can have multiple uses and that you end up using in situations that you may have never thought of.

For such a small light the M9 still provides a powerful enough wide beam angle and photometric colour accuracy that puts most other lights to shame. At just $45US the light is worth having in your kit bag even if you don’t end up using it for its intended purpose.