Users of Sony cameras like the FS7, FS5 and F5 and F55 have been able to use 2/3 inch B4 ENG lenses for some time now in HD Centre Scan mode using an optical adapter. There are several on the market and one of the most popular is the B4 to S16 E-mount adapter made by London based firm MTF. With the adapter there is a 0.7 stop light loss, which isn’t too much of a problem given the fast apertures of most B4 lenses.

Up until now, Canon users have not been so lucky (the other MTF adapters available relied on using the built-in extender on the lens, instead of the crop mode, losing almost 3 stops of light). Most of the Cinema EOS lineup does not have crop modes. That has changed with the latest firmware for the C300 mkII, which will soon be able to record audio in HD crop mode. To make use of this MTF have created a new version of the B4 to S16 adapter with a Canon EF mount.

Historically, the flange distance of the EF mount has made it difficult to engineer optics. With this new version, MTF services have redesigned the adapter so that the optics protrude into the camera body. This works fine with the C300 mkII and also cameras like the Blackmagic Design URSA Mini – but it may have clearance issues with other Canon cameras. 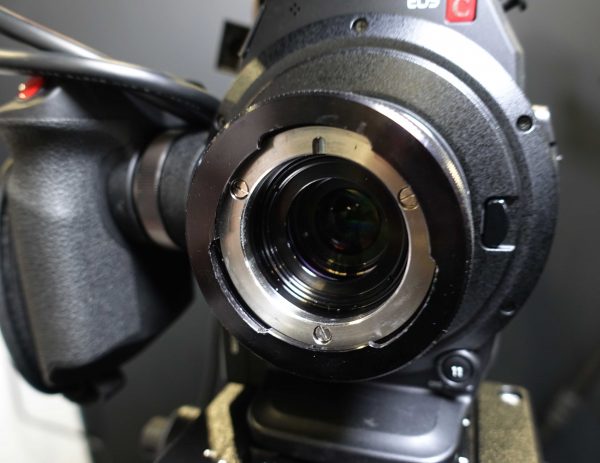 The resulting image looks pretty similar to what you would expect to see from the same lens on a broadcast camera. Don’t expect the same shallow depth of field at wider focal lengths that you get with S35 lenses. What you do gain is the much wider zoom range and also the greater dynamic range and colour options that large sensor cameras like the C300 mkII tend to have.

Like the Sony version of the adapter, the servo zoom of the lens can be powered using an external power source. MTF make a 12-pin to D-tap or Hirose cable that allows a regular broadcast battery to be used.

One other thing to note is that MTF recommend the use of a rod-mounted lens support in order to prevent excess strain on the lens mount.

At the BSC Expo 2017 we got our hands on the adapter and it seems to do a pretty good job, as you can see from the sample shots in the video above.

Canon also make their own B4 to EF lens adapter. Marketed for the C700, it should also work with the C300 mkII – although I haven’t been able to confirm this. It is more expensive than the MTF version and not yet available.

The adapter will start shipping in around 4 weeks, priced at £1,500+VAT. Adapter support will also be included for that price. Keep an eye on the MTF website for more details.