Using a action camera or a DJI OSMO attached to a Charters Pole or monopod can give great results from high up. The downside of these cameras is they don’t do well in low light and lack the image aesthetics of larger cameras. The GH4, Sony a6500 or a7S II can easily be carried up in the air, but if you want to add a brushless gimbal the weight of the setup limits what you can do safely with a Charters Pole. An obvious solution would be to use SteadXP’s stabilisation technology and I’ve been wanting to test this out for some time now.

Long time followers of this website will know that the SteadXP software works by attaching a small box with accelerometer and gyro sensors to your camera. The box then records this data to a micro SD card. At the same time a sync signal is sent to your camera’s audio input (obviously you need a camera with an audio input) and is recorded to one of the audio channels. This information is then re-combined later when you process the footage using SteadXP’s own PC application.

The data allows the software to ‘know’ how the camera is moving and therefore perform its stabilisation routine both accurately and rapidly. You can perform stabilisation quite quickly and without top line computer hardware. For news and documentary shooters this is what sets SteadXP apart from other software only solutions at the moment. 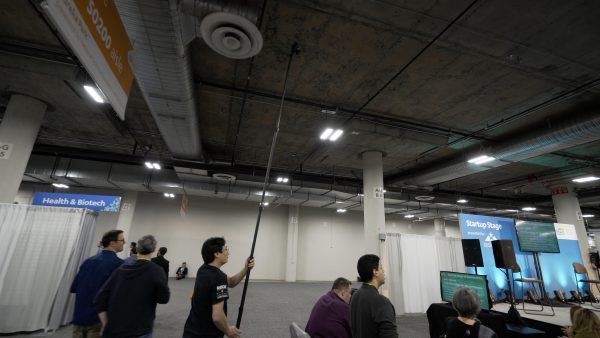 On the downside using SteadXP requires that you shoot at reasonably high shutter speeds, ideally 1/100th or higher, and the image is usually significantly cropped – like all software stabilisation systems. To get a good result the highest resolution possible should be used with a very wide lens. The Panasonic GH5 with its 6K Photo and high resolution anamorphic modes looks like an ideal candidate for this.

So finally at CES I got to test my theory out. Together with Lok Cheung from our sister site Photo Gear News, I met up with SteadXP founder Adrien Farrugia. We put a GH4 with a 12mm lens and SteadXP box up on a Charters Pole and went for a walk around the show floor. You can see the results for yourself in the videos here. We recorded 4K internally for a HD output. Whilst not perfect, I think what can be accomplished is impressive. For news and documentary work I can see it being a useful addition to my kit.

Of course SteadXP isn’t only useful on a pole. It was originally conceived with simple tracking shots and action sports in mind. I previously tested this with an earlier beta of the hardware (see video below) and can see many situations where a brushless gimbal would not be practical where I would use SteadXP instead.

The results will improve considerably as resolution on small cameras gets better. I’m very keen to try the GH5 with SteadXP next. The SteadXP units were offered on Kickstarter but are running some way behind the original schedule for release. Hopefully they will start to ship soon and we’ll be watching out for this.