So one of the biggest questions that potential buyers of the GH5 seem to have concerns whether the camera works with the Metabones Speedbooster XL 0.64x adapter? This adapter was originally designed for the GH4, with its approx 2.3x crop factor when shooting 4K video. The GH5 has a 2x crop in 4K video mode, so there has been a lot of speculation about whether the Speedbooster XL can be used to give the image the appearance of an approx. 1.3x crop factor camera (similar to the Canon EOS 1D C). This is significant because the look should then be closer to full-frame than that from competing Super35 sensor cameras – a pretty neat trick if it works. In addition the amount of light hitting the sensor is increased by around 1.3 stops, which should help reduce noise by allowing you to work at lower ISOs.

Today I had the chance to test out the combination at CVP, the UK’s biggest video gear dealer. They had a pre-production GH5 and I brought my Speedbooster XL along to try with it. Fortunately for me, Youtuber Kaiman Wong was also able to come along and so we decided to shoot a short tease for his new collaboration with CVP as a test. 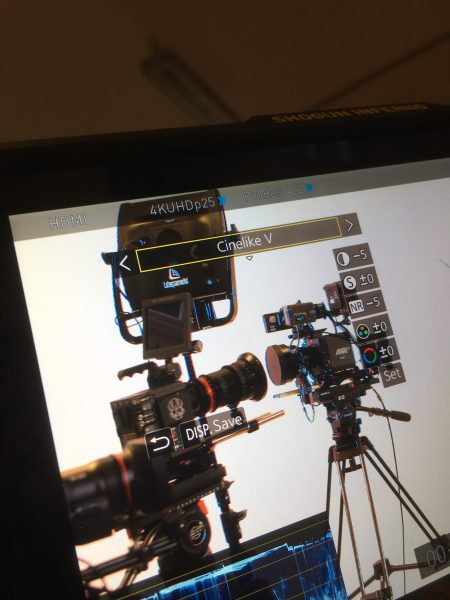 As you can see the results are pretty impressive. We shot with using a XEEN 50mm T1.5 cine lens with the Speedbooster. The GH5 was set in 4K/25P and 150Mbps and recording was internally to SD card. The camera is a pre-production sample and image quality should not be taken as final, but I’m liking what I’m seeing so far. The camera was set in Cinelike V with contrast and noise reduction dialled down to minimum (although I’m not sure that these settings were working as the resulting file is still pretty punchy). ISO was 200 and the in-body image stabilisation was turned off. The pre-production sample didn’t have V-Log installed on it, so I was unable test that. The footage above is straight out of the camera and completely untouched.

Things aren’t all roses though. At the moment my EOS fit Speedbooster XL will only work properly with manual, non-electronic lenses like the XEEN we used. I tried a variety of electronic Canon, Sigma and Zeiss EF mount lenses and they all had problems with the camera. The Canon and Sigma lenses simply locked it up, while a Zeiss Otus 85mm I tested worked for a while, then prevented me changing the aperture any further. The only way I was able to use these lenses was to disengage them slightly so the contacts didn’t meet, then use them locked wide open – far from ideal. I suspect this is down to the Metabones firmware and I hope the company can figure this out as soon as possible, hopefully before the camera ships in March.

Another thing to watch is the in-body image stabiliser. When this is engaged the sensor moves around to combat vibrations. Because the image circle of the Speedbooster XL isn’t that much bigger than the sensor itself there is the risk that the edge of the image circle can come into frame when the sensor moves. This was apparent a couple of times during testing and I need to play around with the camera more to establish how different lens and adapter combinations are affected by this. For now I thought it better to disable the in-body stabilisation for the testing.

Even given the potential drawbacks, the Speedbooster XL and GH5 combination does seem to create a very nice image and I’m looking forward to playing more with it once the camera ships.

We have some more test shots which I hope to publish in the next day or two, so please stay tuned.