A few weeks ago we had a hands-on briefing at Panasonic UK with Panasonic’s Michiharu Uematsu and Richard Payne from UK distributor Holdan about the GH5, and today at the CES show in Las Vegas Panasonic released the full detailed specification for the camera.

It’s very impressive and is based around a new 20.3 megapixel sensor that has no optical low pass filter. It’s a world camera that can switch between NTSC and PAL frequencies and is also the first Panasonic mirrorless to offer both H.264 and H.265 recording.

Not all of these recording options will be available at launch. Firmware will updated at various points in 2017 to enable recording modes.

Importantly, the camera can now record 4K from the full width of the m4/3 sensor – a big improvement over the GH4 which cropped the image significantly. This should bring GH5 crop factor to around 2x, versus 2.3x for the GH4. Wideangle lenses in particular will benefit from this.

In addition the camera also has a much faster readout of the sensor. In 4K video the sensor read speed is claimed to be 15ms, versus 22ms on the GH4. This should make for much better rolling shutter performance.

This is all possible thanks to the latest Venus processing engine which is twice as powerful as previous versions. The extra resolutions and bitrates would be irrelevant if the image from the camera were full of aliasing and compression artefacts -given that the camera doesn’t have any anti-aliasing filter you might expect this to be the case. But Panasonic have used the extra power of the new Venus engine to do some very clever image processing. New algorithms have been designed to give the GH5 higher detail than the GH4, while suppressing the appearance of aliasing and other artifacts.

The GH5 has what Panasonic calls Multipixel luminance generation; an enhanced de-mosaic process that references an area of nine times the usual single R,G,G,B pixel cluster to better reproduce contrast. Intelligent Detail Processing “separates the subject into flat, detailed, or edged areas by analysing the characteristics of the subject for each pixel to control the edge emphasis.” The system seems to be able to differentiate between flat areas of an image that need little detail, detailed areas of the image that need edges to be well defined, and hard edges that need aliasing to be suppressed. These are all handled differently depending on what the camera deems necessary.

Noise identification with four times higher resolution is said to result in lower noise, while preserving detail: Panasonic claim the GH5 has much better performance in low light than the GH4. I was shown test footage, shot at ISO 6400, which was much cleaner with far better noise reduction.

All of this image processing happens in real time and I’m very keen to see just how good it is in practice.

The camera will have a V-LogL option, but like the GH4 this will be a paid-for licence key. Using V-LogL Panasonic say the camera should have around 12 stops of dynamic range – similar to the GH4.

Another new feature is the ability to load up Lookup table (LUT) data when using the camera’s display. Up to four sets of LUT data can be stored on a SD card and registered. LUT data must be in the Panasonic .vlt format used by the larger Varicams.

A Hybrid Log gamma designed for 4K HDR video is also slated to be released this summer. Using this you should be able to output HDR images directly from the camera to a compatible display.

As standard there are the usual range of Panasonic gammas and colour settings. You can still shoot in Cine-V like or Cine-D like, just like the GH4. This should make it reasonably easy to match the two if needed.

There are dual SD card slots. These are of the UHS-II U3 variety, allowing for the super high recording bitrates. You can choose to switch automatically from one card to the other when the first becomes full, record the same files to both, or designate one card for photos and the other for video.

For external recording and monitoring there is now a full sized HDMI connector replacing the micro HDMI on the GH4. Included with the camera will be a HDMI cable lock. These welcome additions should make working with external recorders like the Atomos Flame series more robust. The only slight negative point is that, like the GH4, the location of the HDMI connection means that the rotation of the LCD screen is limited when flipped out.

The EVF has seen an even bigger improvement. It is now uses a 3680k-dot OLED, which is the highest pixel density seen on a camera of this type. It is suspiciously similar in specification to the one on last year’s Leica SL (Typ 601). When I tried it out it seemed very clear indeed.

There’s also now a waveform monitor and vectorscope – useful additions that are essential if you are shooting in a Log gamma. You can also record bars and a 1kHz Test Tone.

Like other recent Lumix cameras it has an in-body sensor shift stabilisation system that can work with practically any lens – even vintage manual focus ones or cinema glass. If using a lens without the appropriate electrical contacts then you’ll need to tell the GH5 the focal length of the lens in the camera menu.

The stabilisation works best in tandem with newer Lumix lenses with the latest built-in stabilisers. These include the new Leica branded 12-60 f/2.8-4.0 ASPH, as well as new mark II versions of the popular Lumix 12-35mm f/2.8 and 35-100 f/2.8 zooms. Using the Dual I.S. 2 system Panasonic claim a 5-stop compensation effect from the image stabilisation. The improved stabilisation effect also functions at the telephoto end – something that conventional stabilisation systems can struggle with. Good news for owners of the Mk I 12-35 and 35-100 lenses is that it will apparently be possible to update the firmware on these older lenses to enable compatibility with the new IS system.

Autofocus for video is perhaps the one area where I was expecting to see a bigger improvement. The GH5 does not have a phase detect AF system, unlike its arch rivals the Sony a7R II and a6500. What it does have is an improved version of the Panasonic’s DFD contrast detection autofocus. This is the same technology used in the GH4, but with the GH5 it is claimed to be faster thanks to the increased processing power. Panasonic were keen to promote their Motion vector tracking technology that identifies how a subject is moving through the frame. Quite how this new AF system will compare with the likes of Canon’s Dual Pixel CMOS AF and Sony’s Phase detect AF remains to be seen.

One useful new focussing tool is the focus pull setting. This allows you to define two focus points using the touchscreen, then smoothly shift from one to the other. The speed of transition can be varied from 1 to 5. This is a great feature and for those who can remember, this reminiscent of the focus transition options on the old Sony EX1.

On the audio front there is an optional XLR1 audio adapter that attaches via the hotshoe with no need for extra wires (the same concept as the Sony XLR K2M module). All the connections are hidden inside the hotshoe. It has Phantom power and a range of professional audio controls. The only downside is that, unlike the Sony, there is no built-in mic mount. Instead the Panasonic adapter relies on a cold shoe and requires you to use your own mic suspension.

Like many other recent cameras the GH5 also has a built in stereo mic. What’s different is that it has an extra little internal mic that acts as a reference to cancel and reduce noise.

If you don’t want to use the XLR1 or the internal mics, then there is a standard 3.5mm mic jack for standard mics like the Rode Videomic. There is also a headphone jack (I’m looking at you Sony a6500).

Like the GH4 there is an optional battery grip, but there is no new version of the YAGH unit, the brick like SDI and audio adapter for the GH4. In case you are wondering the GH5 is not compatible with the old YAGH either. Getting SDI out of the camera is going to require external convertor boxes. On the plus side the camera does have a timecode output, but no obvious way to input it. 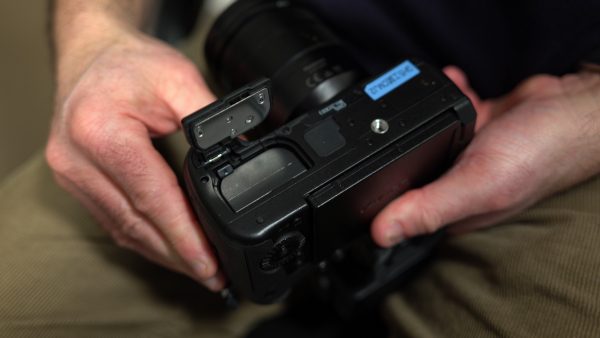 The body is very similar in look and feel to the GH4 – though in fact it is about 10% larger. The control layout is very familiar and any GH4 user should feel right at home. The body is weather sealed and has Panasonic claim it is dust, splash and freezeproof. It can also use the same battery as the GH4 which are well known for their ability to power that camera for long periods – hopefully the same will be true for the GH5.

Another nice touch is a redesigned display interface designed specifically for video users. It has all the main functions clearly displayed in a logical manner.

I suspect that the 6K Photo mode is a sign of the shape of things to come for stills shooters. Panasonic have already indicated that 6K is just a stopgap on the road to 8K recording. The idea of frame grabbing video to create 18 megapixel stills is nothing new: you can already grab 8K stills from video on a RED, but with the GH5 Panasonic are hoping prosumers will finally be satisfied with the results – especially if they are using the higher shutter speeds usually set for stills.

On the regular photo front the camera can shoot stills at 12 frames per second in RAW at full resolution – and for more info on the stills capabilities of the GH5 head over to our new sister site, Photo Gear News.

On paper the GH5 has more pro video features than any other mirrorless camera before it. It is clear that Panasonic have listened hard to user requests. Many of the most commonly suggested improvements have found their way into the new camera. Users should thanks people like Nick Driftwood who have been working closely with Panasonic on the camera.

The high bitrate internal recording, plus the option to record even higher quality externally, is something that Sony or Canon have refused to offer on their mirrorless cameras. The smaller tweaks like LUT support, waveform and vectorscope are also significant and very welcome.

So what’s not there? There are no built-in ND filters, which is hardly surprising given the size of the body. The sensor is still m4/3 size and, even though it now uses the full width, is still significantly smaller than Sony’s full frame and APS-C/Super35 sized offerings. You can of course fit a Metabones Speedbooster to get near to the ‘full-frame look’ and improve low light performance. Though even with a Speedbooster and the improved low light performance, I don’t expect it to rival the a7S II just yet (although I’d happily be proved wrong).

Perhaps the only thing that Panasonic didn’t do that a rival maker has is to offer a RAW recording option. DJI’s Inspire 2 drone camera has RAW recording and a very similar sensor to the GH5. It would have been nice if Panasonic could have found a way to bring that to the GH5, but then of course they have to leave something for a future GH6.