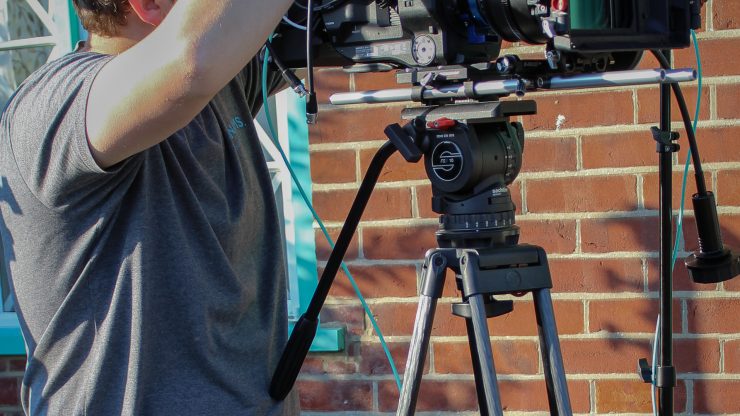 When Sachtler asked if I’d like to trial the new FSB10 – an entry level 100mm bowl fluid head – I jumped at the opportunity, having recently struggled to balance my more heavily rigged Sony FS7 on my existing tripods.

I started testing the FSB10 in my day-to-day work as a corporate filmmaker, putting it through its paces in a number of environments, from industrial factories and commercial premises to exterior locations such as Newmarket racecourses and the Scottish Highlands.

The FSB10 is solid and built to last; this is obvious as soon as you pick it up and use it. For its payload the FSB10 is relatively light and mobile. Having previously used Vinten 3AS and Sachtler Ace L heads I was initially uncertain as to whether I’d use it on all my shoots, or just the ones where I had ample time to set up and move.

I was so impressed by the versatility and undeniable quality of the head’s movement that it was soon coming on every shoot I had. The slight increase in weight and size was worth it for the silky smooth movement the FSB10 had when paired with my FS7.

August soon came around and Magpie, a crowdfunded film project that I’ve been working on for the past three to four years, was soon ready to go into production. Having used the FSB10 for around three months leading up to August I had no reservations about tasking it with the 12 days of shooting for Magpie.

We were using my own Sony FS7 but bolting on a ton of added kit to gear it up for 4K raw shooting. To do this we needed to use the XDCA-FS7 output unit along with an Atomos Shogun running the just-released beta AtomOS 6.4 firmware for CinemaDNG recording.

On top of that we had the added weight of Sony CineAlta Primes, an O’Connor O-Box, baseplate, rails, follow focus and a SmallHD 502 monitor for the 1stAC. By the time we’d fully rigged the camera it weighed around 12kg on the dot – the payload of the FSB10.

It was a huge relief to turn up on set every day and know that the reliability and quality of the FSB10 was there when I needed it.

Nearly all of our locations on Magpie are small, delicate museums and houses where space to fit our lights, camera and grip was tough to find. The Touch & Go version of the head had a mounting style I hadn’t previously used much. Over the years I have grown accustomed to Manfrotto and Sachtler’s sliding plate system which, when using a long and heavy camera, can be a frustrating and difficult mounting plate to use. The excellent Touch & Go system of the FSB10 allowed me to click the camera on and off the sticks quickly and without fuss, regardless of the space I was in or the height of the tripod.

In the smallest locations, without the Touch & Go plate, I would have physically had to move the entire tripod and camera away from walls and windows just so that I could slide the camera back to release it from the head. And the sliding plate on the top of the head means that you still have a generous amount of back-and-forth movement to adjust the balance of the camera.

The 5 steps of drag on the pan and tilt are just right for finding your desired movement. At setting 5 I could shoot at 85mm and 135mm and comfortably make the smallest of pan or tilt movements without any shake or wobble. It’s this kind of reliability and repeatability that made shooting Magpie so enjoyable.

Considering its ability to balance a camera package of up to 12kg, the FSB10 is a very mobile and lightweight system. But for run-and-gun work which is a big part of my bread & butter – such as event work where I need to move the camera every few minutes – it would perhaps still prove a little too cumbersome. I still use the FS7 in a stripped-back form in these situations (simply the camera plus lens) so I’ll be keeping my Ace L CF tripod, 2kg lighter.

I also recently travelled to Australia for a shoot and despite my luggage limit being 30kg I still found it impossible to justify (and fit) the FSB10 into my kit for travelling. Over the years I’ve found the Ace L CF to be the perfect middle-ground between weight, portability and quality.

I think the FSB10 is a perfect system for a camera like a Red Raven, Red Scarlet, C300 Mark II or FS7 but totally overkill for anything smaller (I still regularly shoot b-cam with an A7SII and it is dwarfed by such a large tripod system). Likewise, it is probably unable to handle something like an Alexa or other cinema camera when really kitted out.

But all that said, while it’s strange to praise something as fundamental as a tripod on a shoot, it was a pleasure to work with something so reliably smooth and ruggedly sturdy as the FSB10, having used so many tripods not quite fit for the task. I can’t imagine shooting without it now.

The FSB10 is available in several different configurations. More details can be found on the Sachtler website.

Paul Cook is a freelance lighting cameraman, editor and photographer working in across the UK with bases in Suffolk, Cambridgeshire & London.