The 4K 1-inch sensor camera is on the rise. The latest generation of sensors offer a reasonable compromise between image quality, noise levels and chip size. Being close to Super16mm, the 1-inch sensor size allows for either very small lenses, or larger ones with extended zoom ranges. Lenses of the same reach would have to be huge to work on a larger Super35 or full-frame sensor. Although these lenses can’t get the same shallow depth of focus that can be achieved with fast primes on large sensors, you can still get fairly shallow focus with the right lens and a 1-inch sensor. Indeed quite a few big screen movies are still shot on 16mm film.

From Sony we’ve seen the consumer RX100 and RX10 lines, as well several more conventional camcorders including the PXW-X70 and PXW-Z150. Canon have the XC10 and XC15 which are targeted at news and documentary shooters. Panasonic have several compact and bridge cameras, plus a line of larger camcorders with 1-inch sensors. The latest of these is the HC-X1 mid range 4K camcorder.

For around the same price as a Canon 5D mkIV or Sony a7S II body, the user now has the choice of a fully functioning Panasonic 4K camcorder with built-in ND filters, XLR audio and a massive zoom. 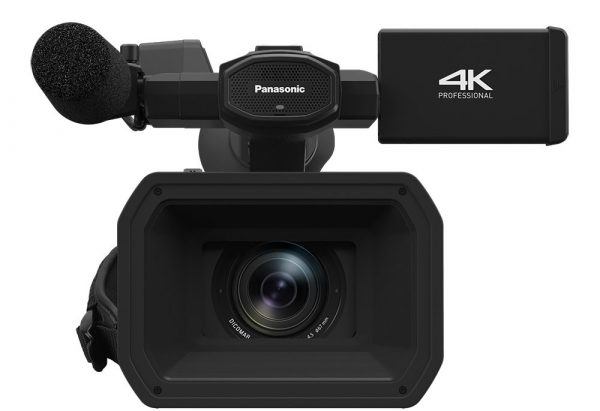 The HC-X1 looks and feels like a regular camcorder. It has a 20x wide to tele zoom with a 35mm equivalent of 24mm at the wide end (in 4K DCI, 25.4mm in UHD and HD). This is coupled with an excellent optical image stabilisation system in 4K/UHD. In HD this is complimented by electronic image stabilisation too, allowing you to handhold the camera even at the long end of the range. The results might not be tripod like, but for breaking news it could mean the difference between getting something usable or not. There is a pretty decent autofocus system as well, but perhaps more importantly there are dedicated rings for focus, iris and zoom. The f 2.8-4.5 lens aperture isn’t going to allow for those super shallow depth of field shots we’ve all become used to, but for fast moving news stories there is a lot to be said for having the longer zoom reach instead.

There is a HDMI output for external monitoring and recording, but it is only 8-bit. Realistically this is not a camera for the sort of used who is going to record externally.

There is a nice flip out screen and a good quality OLED electronic viewfinder at the rear, which looks similar to the one on the more expensive DVX200.

The camera has the usual range of Panasonic colour modes which should make matching with other Panasonic cameras easy, but the is no log mode. This is unsurprising considering who its aimed at, although it would have been nice to see.

If you do crave the shallow depth of field look for some shots, then one obvious solution is to get a second Panasonic camera like the GH4 or new GX80/85 models to use alongside the HC-X1 for beauty shots and interviews. I haven’t tried these combinations but there is no reason I can see why the results shouldn’t be acceptable. 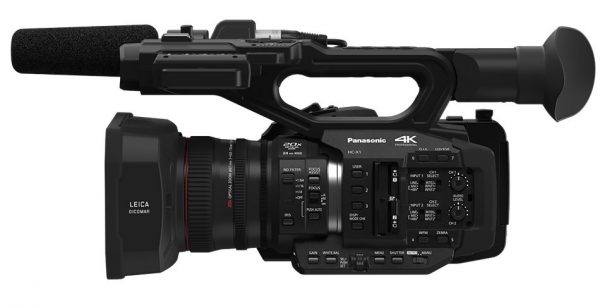 If you think the HC-X1 looks familiar, then that’s because in many ways its the same camera as the AG-UX180 we reported on earlier this year. The HC-X1 is essentially the same camera without the SDI and timecode input connections. This makes it less useful for broadcast news users who routinely need to connect via SDI for playout or live broadcasting.

Ultimately the HC-X1 isn’t really aimed at broadcast users. The low price makes it much more attractive to solo video journalist, documentary makers and event shooters working on a budget. If you fall into that category then the HC-X1 is certainly worth a look.