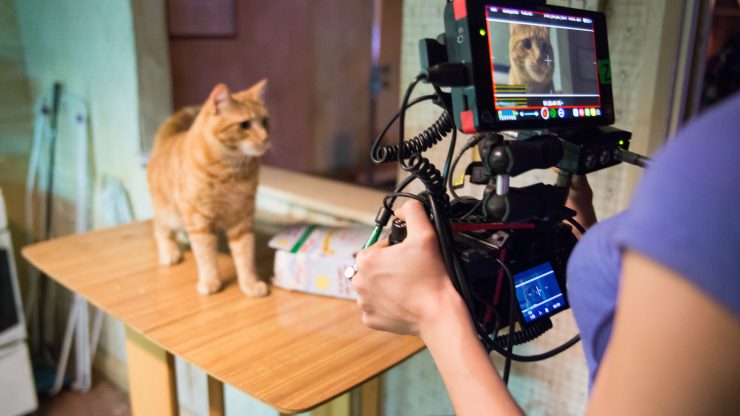 At Newsshooter our focus is always on factual and reality shooting, but sometimes a story from the fictional world comes along and piques our interest. Sony’s a7 series cameras have become commonplace in many news shooters’ bags. But can the diminutive cameras possibly be good enough for the big screen too?

Prosumer cameras certainly have been used on big movies. Often the reason is to get shots that the small form factor is suited for, mostly linked with extensive VFX – Phil Bloom shot parts of Lucasfilm’s Red Tails on Canon DSLR, DP Shane Hurlbut shot on DSLRs for his action movie Act of Valour, Iron Man had some DSLR footage, GoPros were used for POV shots in The Martian, and a variety of Nikon DSLRs were used for action sequences in Mad Max: Fury Road. More recently, however, there have been fewer mainstream releases that dare to use prosumer gear extensively.

One director who hasn’t been afraid to experiment is Roger Spottiswoode, whose work includes the Bond film Tomorrow Never Dies, Turner and Hooch, Air America and Schwarzenegger movie The 6th Day as well as documentaries.

For his latest feature A Street Cat Named Bob, which is currently in UK theatres, Spottiswoode and his DP Peter Wunstorf turned to the Sony a7 series cameras for parts of the filming. Spottiswoode explained that the film tells the story of a homeless junkie, who has a harsh life on the street, and his connection with a cat named Bob. The challenge was “to do that in a way that feels like a relationship film – the camera has to work in the way that it does with humans.”

The idea came from the need to develop a small system that would be used to film Bob’s scenes. Wunstorf was no stranger to DSLR shooting and the pair had previously filmed polar bear cubs on the ice of the Hudson Bay using a Nikon D800. Between the two of them they cooked up a plan to shoot with six Sony a7R II cameras and an a7S, alongside the Arri Alexa. The Sonys would have to be in lot of varied places and the footage intercut with Alexa footage throughout the movie.

Why so many cameras? Spottiswoode’s answer was simple: “You can’t get animals to do the same thing twice, so you need to set up to allow for that.” For most of the filming there was only one cat playing the role of Bob and “he didn’t work long hours”. One of the few times they did use a cat stunt double was a scene where Bob jumped off a bus – the main Bob didn’t want to do that.

The smaller size of the camera packages allowed them to be put low on the ground and in small spaces. Spottiswode explained that it’s “tricky to make [a cat] a main character that’s as well photographed as the humans” and “to cover [Bob] properly in proper movie language”.

Before the shoot the production spent a lot of time at Pinewood Studios doing tests on a small stage. The duo had to be 100% sure that the cameras were good enough and they tested operation and image quality extensively. Sony were on hand to help out.

The final setups were mounted in Lockcircle and Movcam cages with Angenieux cine lenses (with PL adapters) and also some Sony lenses. The footage was externally recorded using Atomos Shogun recorders in 4K. Three or four of the setups had wireless remote focus systems attached. The crew also set up one of the cameras in a Freefly Movi rig. The result was a system that allowed the director to watch and see what the cat did all of the time.

The small size of the a7R II rigs had other advantages. The film is mostly shot on location around London. Spottiswoode explained: “Covent Garden is just impossible, you can’t stop the tourists, you can’t stop the cars.” They used both Alexa and Sony, but “got a lot of material when we just had the Sony”, because “nobody pays any attention; you look like a tourist”.

Overall, he said, “it did allow us to film an unusual story in an unusual way….It made the film possible for me.”

Spottiswoode is so sold on the system they used that he foresaw being able to use it for future projects: “These light, smaller cameras are very, very good,” he said.

He did point out there are still several advantages to an Alexa: “All of the buttons are easier…but it’s a lot to handle.”

He was also enthusiastic about how well the footage stood up in post.

“You’ve got a very orange cat”, he explained, and “the colour balance was extremely good.”

“It came together very well. I don’t think anyone has a chance of telling which camera is which. They are identical.”

In fact, he could even see an entire film shot on the a7 camera range for the right subject.

“The actual system works beautifully,” he said.
“If you have a camera system that weighs around 10lbs it’s so easy and makes life for everyone very quick… especially if you work on the streets.”