Newsshooter got an advanced look at the camera at Sony’s New York headquarters and we have all the details.

First, let’s get the highlights out of the way:

The sensor and image are unchanged from the original FS7. The codec choices and the autofocus system are also the same.
The mark II model is an addition to Sony’s FS lineup, and not a replacement. The previous model FS7 will continue to be sold (in body-only form) at the existing price.

There is a new beefed-up lens mount that now has a locking ring, much like a PL mount, but compatible with existing E-mount adapters and lenses. Sony refer to it as a Lever Locking E-mount.

The FS7 II gets the an electronic neutral density filter which is continuously variable from 1/4 to 1/128 strength, similar to the one on the FS5. It can also be completely disengaged when unneeded and is automatically replaced with a clear glass. 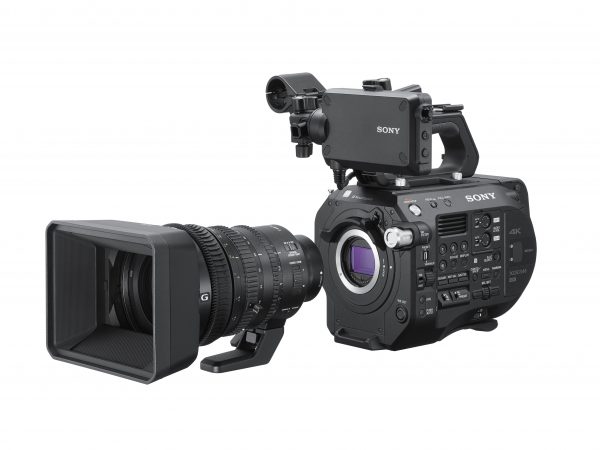 We spoke with Sony’s senior product manager for the FS7, Juan Martinez, who gave us the rundown on the new features.

The electronic variable neutral density filter can be operated in three ways:

1. You can preset the four-position filter wheel to whatever fixed discreet levels of ND you want – in a similar way to the way you can assign values on the gain switch on other models. This allows you to work in much the same way as you would with a conventional ND filter wheel, with rapid ND changes if you need them.

2. Alternatively you can use a thumbwheel to vary the ND continuously, through seven stops of correction. This is essentially a better version of a front mounted variable ND filter, but without the drawbacks.

3. You can use automatic ND for auto exposure without varying f-stop, gain, or shutter speed. The electronic neutral density control doesn’t affect the color the way a regular ND fader filter on the front of a lens does, and it quickly becomes your primary exposure control, allowing you to work at a constant aperture in almost all situations.

The new locking ring lens mount is part of a whole new strengthened internal front that will support heavy cine lenses or ENG lenses. At the preview, Sony had a long B4 ENG lens hanging off the front of a FS7 II via a 16x9inc adapter, with no apparent flex in the mount. Because of the E-mount flange design, the locking lens ring goes counter-clockwise, opposite from the F55 PL mount locking ring.

To mount a lens, you insert it without rotating the lens, and then turn the locking ring. There’s an interlock button to prevent dropping a lens when you remove it. Martinez can change lenses one-handed but it would take me some practice. 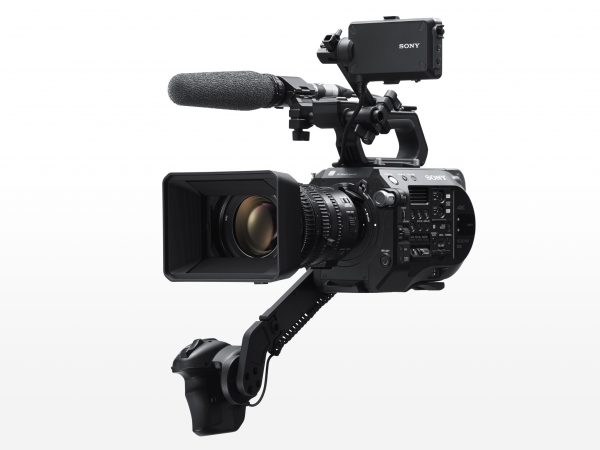 Other changes make the camera easier and more ergonomic to use. Sony say these improvements are a direct response to customers’ requests and feedback:

The viewfinder and microphone mount have been changed.

The microphone mount is now a hand-tightened clamp on a 15mm rod that runs through the handle front, rather than being fixed on the rod as on the FS7. The microphone mount itself has been modified for better noise isolation from handling. With the new mount you can use a microphone either on top, or slightly underslung closer to the lens.

The viewfinder mount’s front and rear adjustment has been changed from a round rod, to a very slightly longer squared-off tube that will ensure that the viewfinder stays in a horizontal orientation. Included with the camera will be inserts so you can replace the square rod with a standard 15mm round rod if you prefer – some users prefer a round rod because it allows you to swing the viewfinder in front of the camera, making the camera slimmer for transport in bag.

The viewfinder is the same as the existing FS7, apart from the fact that the magnifying tube loupe now has a fixed top bracket, instead of having latches both top and bottom. This makes it easier to attach and detach.

The camera will also come with a sun shade folding hood in addition to the magnifying tube. Because of the clamp mount for the microphone, you are now free to use a longer 15mm rod to offset the viewfinder for left-eyed use (or even on the opposite side of the camera.)

The main body is essentially the same but there are a host of minor changes.

There are new buttons added to the left side of the camera, so you now have ten programmable buttons instead of six. These have a dotted texture that makes them easier to locate by touch.

The door covering the audio controls now opens down, instead of to the rear. The media slots on the original were always a bit fiddly. On the FS7 II they have been changed so the XQD cards stick out far enough to grab with gloves on. (They’re also introducing new 256 gig XQD cards.) There’s a more obvious light to indicate the power switch is turned on.

On the right side of the camera, the handgrip arm has been upgraded. You can now change the arm position without tools and there’s a new alternate mounting position to get the handgrip much closer to the body for chest-level or under-arm shooting positions. This alone makes it a much better shooter’s camera than the preceding FS7. The control wheel on the new model’s handgrip has new ballistics and senses the speed you’re turning it. It can control the variable ND in addition to the host of other things it can already control. Unlike the FS5, the joystick can’t control the ND, however.

The FS7 II uses the same BP-U batteries that Sony has been using since the EX1. However, they recently introduced an optional new BPU-60T battery with a hirose connector to power external accessories.

Image-wise, it will be the same as the FS7 except now REC BT.2020 color will be included in your color space choices. This is a welcome upgrade that has the potential to make for better HDR and 4K images. Sony were keen to stress that by keeping the color the same it makes it very easy to intercut FS7 II footage with the original’s.

This new FS7 II is an incremental upgrade that makes it better to shoot with, but doesn’t fundamentally change the image coming out of the camera. If you’re thinking of getting an FS7, the FS7 II may be worth the extra money for the ergonomics alone. But for those who already own an FS7, I think it will be hard to make them consider upgrading given the price.

Here’s the official release from Sony: 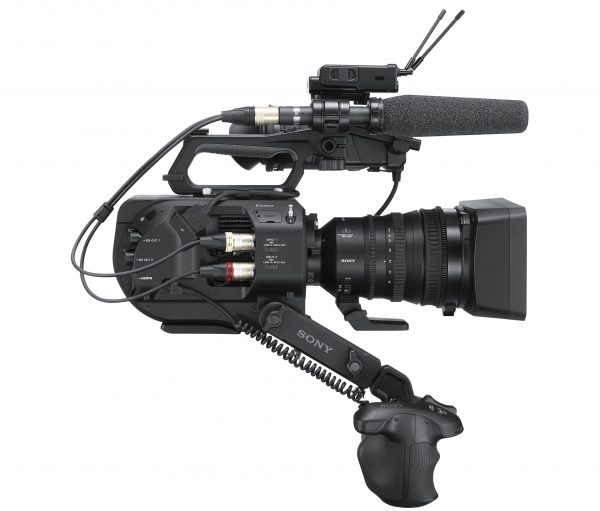 Since its introduction in 2014, the FS7 has become one of the most widely used cameras in a range of production applications, and the original FS7 model remains in the Sony line-up. The new FS7 II now gives creative professionals a broader range of creative tools, with new features all based on end user feedback.

The camcorder’s Electronic Variable ND Filter system, combined with its large sensor, delivers greater exposure control, with the option of preset or variable operation modes.Variable ND mode (seamless ND attenuation within the camera’s 2~7 stop range) allows the user to vary the density of the ND filter during shooting and to transition seamlessly between steps.

Preset mode lets users assign three ND settings to the filter turret, useful in selecting the most appropriate filtration range for changing light conditions. Auto ND mode is also availableallowing exposure to stay at a fixed level while adjusting the depth of field with iris control.

The FS7 II’s new E-mount (lever lock type) gives users theability to change lenses by rotating the locking collar rather than the lens itself, which means that in most cases lens support rigs don’t need to be removed, saves time during a production.

Like its counterparts in the FS Series family – the FS7 and FS5 models – the new FS7 II features several design and ergonomic updates for comfortable and functional use in the field.

The FS7 II’s “tool-less” mechanical design lets users make on-the-fly changes to the camera’s set-up and operation. For example, no tools are required to adjust the Smart Grip or viewfinder positions.

The lens benefits from Sony’s Smooth Motion Optics (SMO) design, which is developed to optimize performance during motion image capture. This lens design eliminates undesirable characteristics and artifacts that do not affect still image capture, but can severely limit a lens’ usefulness for motion shooting, such as:
• Ramping: F stop gradually diminishes when zooming tight.
• Not holding focus while zooming.
• Breathing (angle of view variation while focusing).
• Optical axis shift (image moves in the frame while zooming).

The FS7 II supports the XQD memory card format, designed for capturing and transferring high-bandwidth, high resolution files. Sony is also introducing a new XQD card, QD-G256E — with an industry first 256 GB capacity – which enables a recording time of approximately 45 minutes at 4K 60P and 3.5 hours at 2K 30P. Combined with a read speed of up to 440MB/s and write speed of up to 400MB/s, users can shoot for longer without needing to change media cards.

The FS7 II is planned to be available in January 2017 with pricing to be announced.