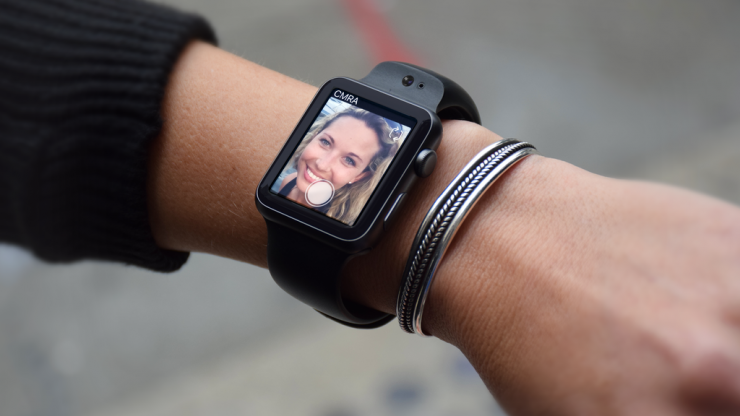 If James Bond were a journalist rather than a spy, he would have worn a CMRA band with his Apple Watch. Although it may not be equipped with a Geiger counter or built to withstand 150 meters of water pressure, this particular piece of flair for your wrist can capture HD videos or photos and comes with both a front and rear camera.

The 2MP upward-facing camera can be used for video calls using the Glide app, as well as the occasional selfie, while the 8MP outward-facing camera makes it easy to capture quick moments when pulling your iPhone from your purse or pocket just won’t do.

To use either camera (both equipped with Sony sensors), tap the button built into the wristband. A single tap takes a photo, a long press records a video, and a double tap switches between the two cameras.

In full James Bond fashion, the band also features a microphone and (in less Bond-like fashion) LED indicators for when the cameras are in use. To improve the quality of your photos, the cameras feature tilt balancing, lens correction, noise reduction and pixel optimisation. There is, however, no information I can see about the video specs. Resolutions, bitrates and codecs used aren’t given, so don’t expect it to rival your shiny new RX100 V.

What Glide, the Israeli startup that makes the CMRA band, do say is that it can capture hundreds of images or up to 30 minutes of video on a single charge. With 8GB of built-in memory, you can share photos and videos to Twitter, Facebook, Facebook Live and YouTube directly from the watch. Everything you capture also syncs seamlessly with your iPhone’s Photos app for editing and sharing.

Watch the following video from CMRA to see the band in action:

The CMRA band works with Apple Watches running WatchOS 3 and iPhones (5 or later) running iOS 10. It also comes with a dual charging dock to charge the band and your Apple Watch all at once.

Weighing just 35 grams, the band is made of splash-resistant flexible elastomer and comes in two sizes (38mm and 42mm) and three colors: black, white and blue. For a limited time, you can also get the watch in gray.

Clearly this device is not intended for “serious” filmmaking, but if it works well then there are plenty of uses for it as a journalistic tool, and perhaps even the odd spot of covert filming.

The band, which is estimated to ship in the spring of 2017 to the U.S. and Canada, is available for $149 for a very limited time (30 days, according to the website). Then, it will be available for pre-order at $199 until it launches at a full retail price of $249.

To learn more about the CMRA, visit the website.