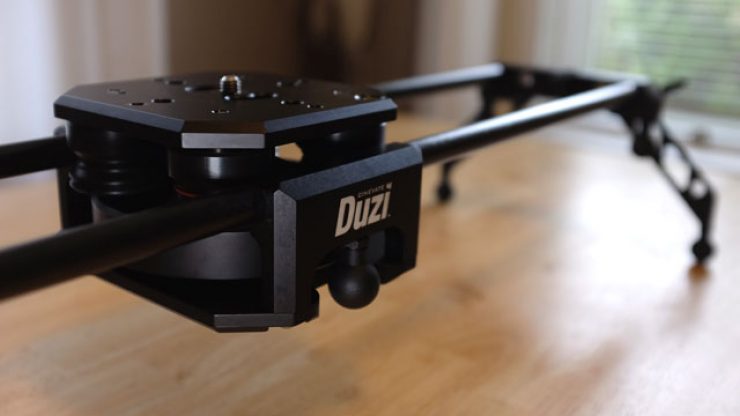 Even with the arrival of new tools that bring stunning camera moves within reach – the MōVI Pro and the DJI Mavic come to mind – the trusty, portable camera slider is still a staple in many news, corporate, commercial and narrative films. And yet even today, many of us are still searching for the perfect slider that simply works without fuss.

Over the last few years, I’ve brought a slider with me on nearly 200,000 miles of air travel. For a while my weapon of choice was the Cinevate Duzi V2, followed by the SmartSlider Reflex S, and a handful of unnamed other sliders in between. They’ve been very portable, but the lack of constant friction in a lot of the ones I’ve used has resulted in many a frustrating experience, especially when attempting slow slides with zoomed-in lenses.

So naturally, I’ve been ogling beefier, more elaborate sliders with flywheels that look like they make steady, perfect slides each and every time. Sliders like the iFootage Shark, Rhino EVO, Kessler CineSlider, and Cinevate’s Hedron are a few of contenders, but I’ve passed on each for various reasons such as weight, size, price, and intricate belt drives that have me worried about durability in harsh conditions. 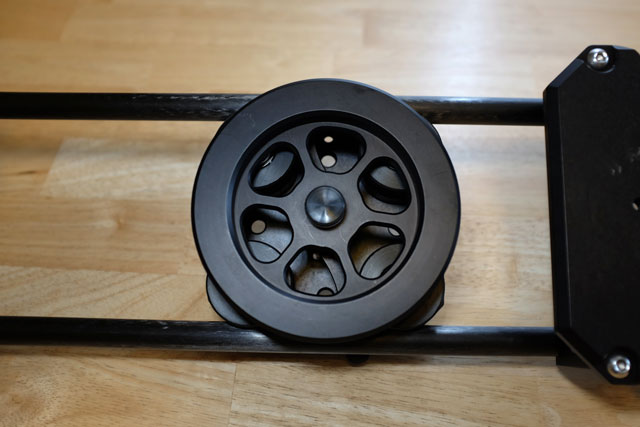 Enter the Cinevate Duzi V4. It’s as durable, portable, and uncomplicated as the previous Duzi models, except it comes with a patent-pending integrated flywheel under the carriage that makes slow, steady, buttery smooth slides so easy a caveman can do it (insert your own culturally relevant figure of speech). Cinevate was kind to send me a pre-production model to try out, and after a swift unboxing I lugged it along on a journey around my neighborhood in Corvallis, Oregon.

The highlights of this short demo are the shots where the camera is zoomed way in, sliding at a speed so slow that it would take over 20 seconds to move all the way across the track. I found the trick is to just push the camera ever so slightly and let the flywheel do the job, moving at a consistent speed despite any outdoor wind resistance.

To me, finding the holy grail of sliders would mean being able to use either a heavy or a lightweight camera, with a normal or long lens (even zoomed way in), on a travel tripod or whatever I have available, and delivering a good, slow, constant speed slide with just one or two tries. Essentially something that works, without fuss, for most gigs with a crew of one or two. 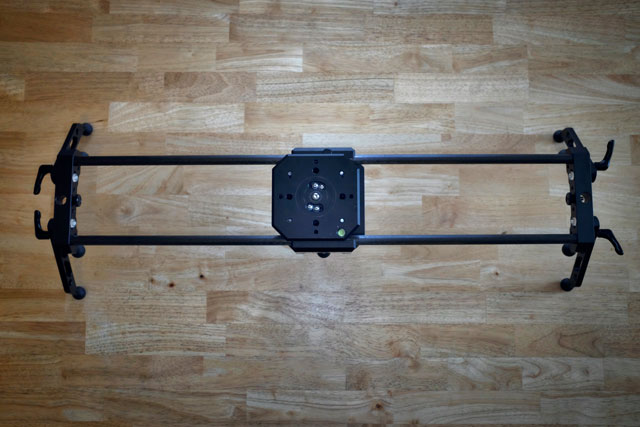 It doesn’t have to be perfect 100% of the time, because to achieve that kind of dependability, you would have to sacrifice portability and use much better support equipment for the camera and slider. So to me it’s kind of a tradeoff: you can have perfect slide shots, each and every time, with the best and heaviest slider and dolly systems out there, but you’ll have less variety of shots due to setup complexity and heavy equipment. Or you can have good enough slide shots, with the portable gear you already have, on all sorts of shoots, and come away with a lot more slide variety in the same amount of time.

That’s my philosophy anyway, but in practice sometimes getting a decent slow slide shot is like pulling teeth. So that’s where the flywheel elevates the Duzi to a whole different level. To my surprise, the Duzi V4 performed so much better than my paltry expectations for a portable slider, even coupling it with prosumer-level support gear that you might have lying around.

Apart from the BTS shots, I used a Canon C300 mark II with a 17-55mm for wides, and a 70-200mm f/4 for zoomed in shots (many of them at 200mm). I brought along a common Manfrotto flathead tripod and fluid head, and a couple Westcott light stands that came in a basic kit. I walked around for an hour and attempted a slide only a couple times before moving on, and edited the shots without stabilization. In a normal edit you might only use a slide shot for 3-4 seconds, but for the purposes of demonstration I let the shots play out in this video. 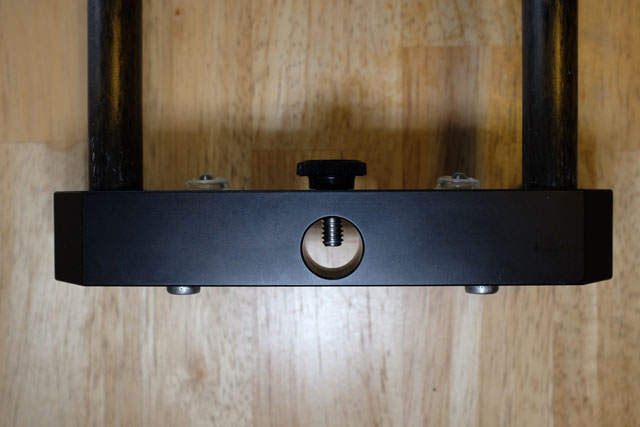 The Duzi V4 can be mounted on a couple light stands supporting each end of the slider, or you can also use a tripod on each end. I think most people will simply mount it on top of a tripod, and unless your tripod is built like a tank, you’ll probably see some flex on either end of the slide. You can certainly use something like the Konova Slider Arm to prop up each end of the slider. Alternatively, to remove the various flex points in a typical tripod setup, with quick release plates and fluid heads each providing their own flex, you can mount the Duzi directly to a tripod via a 1/4″-20 thread on the bottom of the slider.

In my opinion, however, one of the benefits of using a slider that can move gracefully at a snail’s speed, is you’ll only need to use a small section of the slider to get your 4-5 second shot. In this sense, you won’t be seeing as much flex in your shot as you would if you had to move the camera along the entire slider track for a single shot. 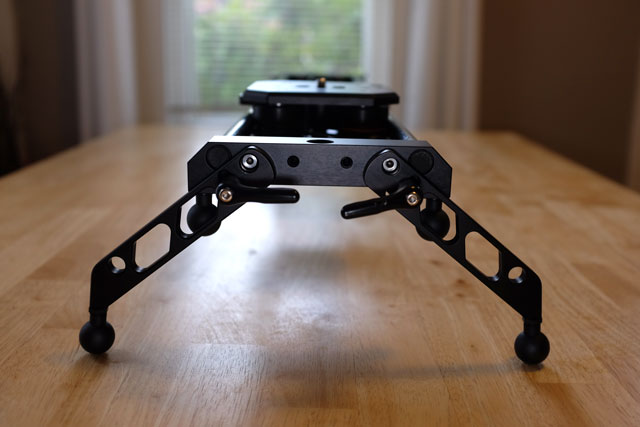 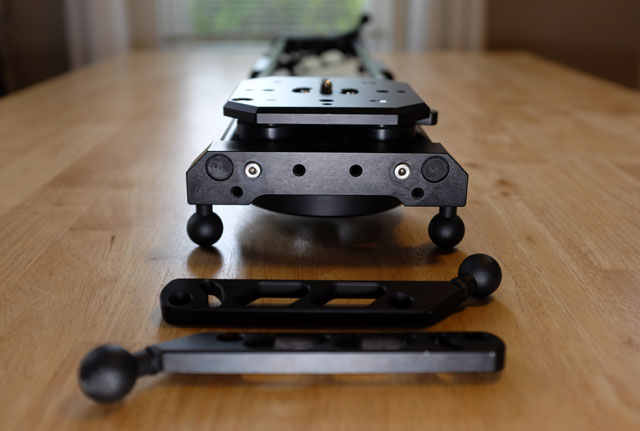 Absent a tripod or other support, you can use the Duzi on just about any surface on its own. The feet are micro-adjustable to help stabilize on slightly uneven surfaces. As an optional accessory to the Duzi V4, you can also use Cinevate’s all-terrain legs that make leveling on uneven ground a breeze. I’m sure I’ve mentioned it before, but Cinevate builds some of the best tightener knobs and bolts out there (their Universal Accessory Mount is a favorite of several Newsshooter folk). So you can be sure these all-terrain legs can support the heaviest rigs in the harshest of conditions. 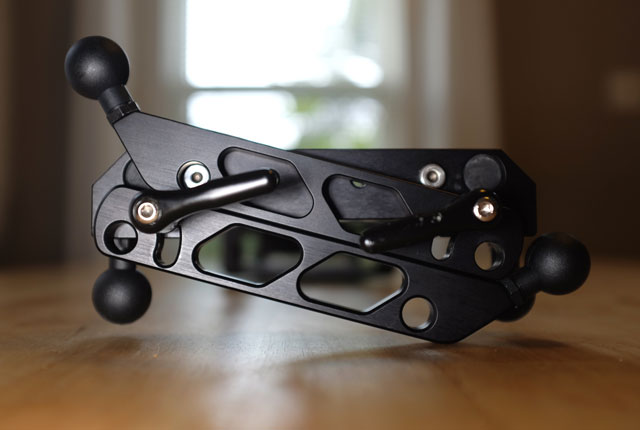 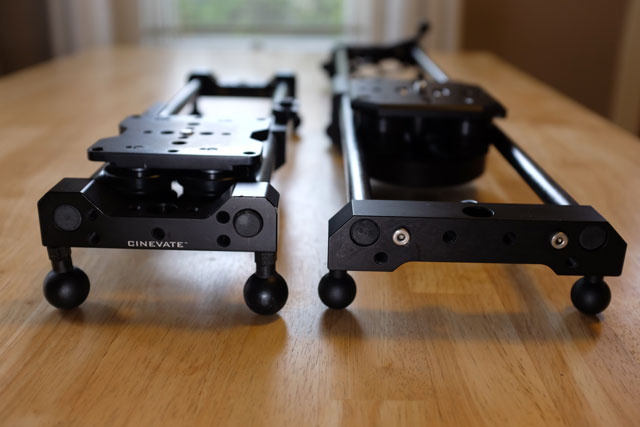 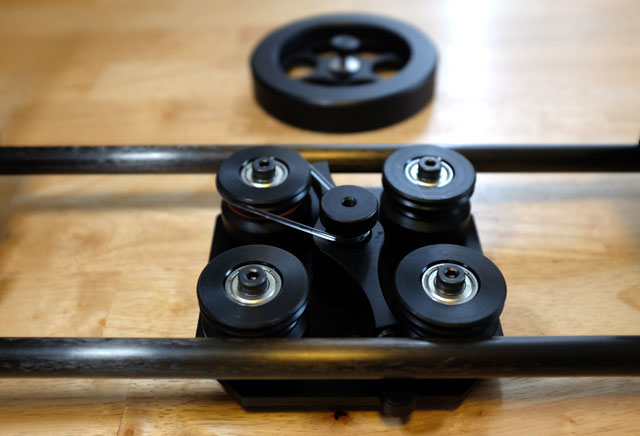 Compared to the previous version, the Duzi V4 has a slightly wider base (1 inch) to make room for the integrated Fly-Wheel. It comes in a 24″ version or a 32″ version, and the Fly-Wheel can be easily removed if you want to shoot a fast slide. This comes handy with over-cranked shots where you still want the slider movement to be visible after the shot is slowed down. In addition, Cinevate’s dead simple Modo timelapse system is fully compatible with the Duzi V4, which combined with their Grip Reacher, I think makes for a highly attractive kit for many shooters.

So is this the perfect portable slider we’ve all been looking for? I can’t answer that, as I haven’t used all the other sliders out there that have similar flywheel systems, and I also haven’t put the Duzi V4 to heavy use on actual shoots around the country. But it’s a damn good slider, and miles above other portable sliders that don’t have a flywheel or similar system. In fact when I went out and took my first slide with the lens zoomed in to 200mm, and felt how smooth and consistent the Fly-Wheel moved along the V4 track, my jaw dropped a little bit. Then again, at that very second, a three-year-old recognized me across the park (you can hear it at 00:31 in the video), so maybe that says something about how old I’m getting and how easily impressed I am.

The Duzi V4 is priced at a very competitive $459 for the 24″ version, more for the 32″ and the bonus all-terrain legs. It has a whopping load capacity of 100lbs, and my pre-production 32″ version weighs 6 lb 8 oz. In addition to the flywheel, Cinevate has improved the brake, increased stability, and have enhanced the width precision of the solid carbon rails. The Duzi V4 will be ready to ship in a few weeks.