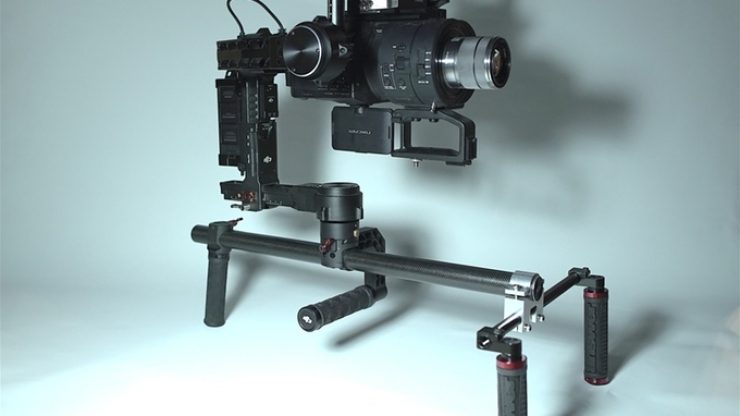 There are several options that turn brushless gimbals into shoulder mounted rigs. These include the likes of the Gimbal Gunner, Shape ISEE+ and the Letus Helix Pro single axis with shoulder mount. Some work better than others, but none is particularly cheap.

If you have a DJI Ronin though there is now a clever alternative on Kickstarter from First Spark Gear. Their new Daisho clamp is brilliantly simple – all you do is invert your Ronin, then attach the Daisho to the handle bar at one end.

The clamp has 15mm rod holes running at 90 degrees to the Ronin’s bar to which you add your own 15mm rod and some handgrips to transform your Ronin into a shoulder mountable rig.

You don’t even need to add a shoulder pad or support. The rig uses the Ronin’s own handle and top grip to form a shoulder brace to keep the whole setup safely on your shoulder. This is made possible partly because the rig is not designed to be held with the Ronin’s bar level, but rather tilted downwards so that the rig essentially hangs from the shoulder a little. This also has the benefit of bringing the camera and gimbal down so that the eyeline is good.

In theory the clamp should work with with any gimbal where the main bar is 30mm – 24mm in diameter. These include the Ronin, Ronin-M 25mm and some MOVIs. I suspect it will also work with several of the less expensive gimbals from the likes of CAME-TV and Moza, but can’t say for sure until I’ve tried it.

Of course once the Ronin is on your shoulder you then need a way to control the gimbal. First Spark are offering a simple 3D printed accessory that clamps DJI’s wireless remote control to your rig using the 15mm rod. This is also offered as part of the Kickstarter and is also quite inexpensive. Of course if you are on a tight budget there are plenty of other ways to tape or stick the controller to your rig, but the First Spark clamp is certainly neater.

Although the makers of the Daisho are keen to pitch the product as an alternative to other suspension or support systems like the Exhauss, Readyrig or Easyrig, the truth is that their setup does something slightly different. The Daisho does not have any z-axis stabilisation and won’t help to remove bounce and vibrations caused by your footfall. That doesn’t stop you using the Daisho setup for walking or even running shots, as their demo video proves, but the results will be dependent on your walking or running style. Where the Daisho has an advantage is in the range of ways the gimbal can be used without having to reconfigure or re-rig the setup.

A pledge of $78 will put you in line for a Daisho clamp, with an estimated delivery of January 2017. You can see more and pledge here.

Like any Kickstarter campaign the usual health warnings apply. Backing the campaign does not guarantee you will receive the end product and timescales can often slip. That said, this particular gadget seems relatively simple to produce and one of the rewards offers immediate shipment of an un-anodised Daisho for $128, so it is clearly a real product.