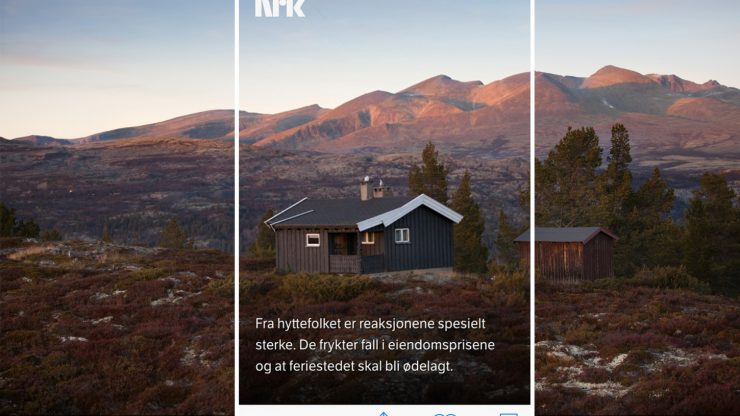 One unexpected aspect (ho ho) of the ubiquity of smartphones is the effect it’s having on how people view video content. For material shot in a traditional 16×9 format even the largest mobile screens don’t offer a great viewing experience unless the user flips their phone sideways – something that we all seem curiously unwilling to do.

Vertical video used to be something of a joke, but it’s slowly been accepted by some broadcasters and video creators, and in the quest for their content to look best on mobile, Norwegian broadcaster NRK have produced their first vertical documentary film.

It’s a multimedia project, so stills were shot for the NRK website in a traditional aspect with crop markers on the camera’s screen. That wasn’t an option for video – shooting 16×9 and cropping in would have lost too much quality – so they turned a Canon C300 on its side and hacked together a grip package to make it useable. There’s a full write-up on their blog here, which goes into the background behind the decision and some of the practical considerations.

It’s a solution that made use of existing kit and the team felt it provided fewer headaches in post than shooting with 4K cameras and cropping the frame after the edit. The result is video that’s targeted at mobile users and shot in a format that’s native to smartphones. In the next couple of years 4K might become an easier option for this sort of project as commodity computing power and storage catches up with the processing and bandwidth needed for editing at resolutions beyond HD (assuming that consumers are happy with their vertical video being served up in HD).

So the era of vertical video is finally upon us. Does it fill you with hope? Fear? A natural evolution of the medium or an unwelcome development? Let us know in the comments below – especially if you’ve been commissioned to shoot something in 9×16. How did it work out for you?