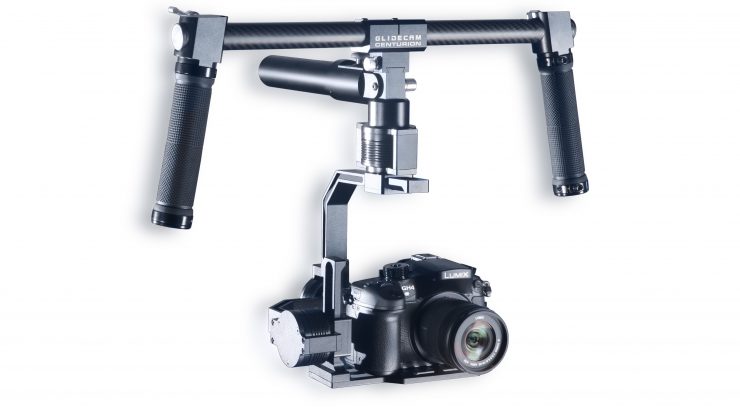 The market for camera stabilisation has exploded recently and if you’re after a handheld brushless gimbal you’re spoiled for choice. In the middle of the market options include the Freefly Movi M5, Letus Helix Jnr and the DJI Ronin-M. Cheaper options are also plentiful from the likes of Came TV, Moza, Zhiyun, Pilotfly, Varavon and countless more.

The two most established mechanical stabiliser brands haven’t rushed to bring competing products out, but now we’re starting to see both Glidecam and Steadicam react to the brushless gimbal phenomenon with quite different strategies.

Glidecam are getting into the brushless gimbal game with their new Centurion 3-axis stabiliser. Their mechanical sleds and arms are well established as solid options for camera stabilisation (although as with all the sled-style stabilisers it can take a bit of trial and error to balance your rig properly).

The Centurion is their first powered three-axis gimbal then and it ticks a lot of boxes: encoded motors and 32-bit processor for smooth motion; single and double handed operation; and a payload of up to 5 lbs (2.2 kgs). There’s an integrated joystick to control the gimbal’s motion and the unit is manufactured in the USA.

Without having had a hands-on test of the Centurion it’s difficult to draw any firm conclusions – but with a list price of $1,799 US it enters a market that is already fairly mature. The competing DJI Ronin-M can be had for less at around $1,400 US on the street. This might not be a huge issue if it turns out to be a lot better than the competition – but as it’s aimed squarely at stabilising mirrorless cameras like the A7 series or the GH4 price is clearly an important factor for these users (I know, I am one!).

Steadicam on the other hand seem to be sticking with what they know – analogue solutions that use weights, arms and vests to damp movement and produce smooth motion. The difference with their recently announced Aero line is the lower price. A vest, arm and sled combo now starts at around $3,000 US – which might sound expensive until you think that a Steadicam for a larger camera would cost you around 10 times that amount.

The Aero 15 system works with cameras up to 10lbs (4.5kg) and the more expensive Aero 30 is compatible with heavier rigs – up to 20lbs. What’s most appealing to me as a Steadicam ignoramus is that the Aero is an integrated package that includes everything you need to get up and running except for a battery and camera. A monitor is included and integrated into the setup, and there’s also the reassurance that Steadicam really know their stuff – they’ve been doing this for over 40 years. The arm and vest not only help take smooth shots, they also make carrying the Steadicam for long periods possible – something that requires extra kit if you want to do the same with a brushless gimbal.

There are some drawbacks with this approach – Steadicams are bulky and need time to set up and calibrate, and you really need to put the practice hours in to get the best out of them. In the ideal world a novice user is best off taking one of Steadicam’s own training courses to learn the craft, but these are quite expensive to do.

There are also some shots that a brushless gimbal can do that a traditional stabiliser can’t, but for the most commonly seen shots like the regular West Wing style walk-n-talk the Steadicams are arguably still capable of smoother, more natural stabilisation than their more modern digital counterpart (at least not without additional mechanical stabilisation from something like a Flowcine Serene, Exhauss exoskeleton or Steadicam’s own Steadimate adapter for their arms). And once you’ve invested in a Steadicam with vest and arm, it’s even possible to connect them to a single-axis brushless gimbal like the new Letus single axis Helix Jnr to get the best of both worlds.

So two different approaches from two established names in the camera stabilisation business: it’s going to be very interesting to see how they play out and whether Steadicam and Glidecam will be able to make inroads into this budget-conscious, rapidly evolving market.