Arri’s Alexa 65 is probably the hottest camera in Hollywood right now. Its giant sensor is paired with rehoused Hasselblad stills lenses for spectacular results. Sadly, even if you had the money to buy this camera, it isn’t for sale: it’s strictly rental-only.

Until recently the Alexa 65 was the only game in town if you wanted to shoot 4K or above with medium format. All that is changing.

At Photokina in Cologne, we saw the beginnings of 4K medium format video on stills cameras. Hasselblad were showing their new H6D-100c camera which can shoot 4K UHD RAW video at around 400 Mbps to CFast 2.0 cards. The company had convincing-looking 4K footage on show to interested customers.

The camera shoots a proprietary RAW format using the full width of their Sony-made sensor, but cropped to 16×9. This then needs to be processed into Cinema DNG files using Hasselblad’s Phocus software. There does appear to be significant rolling shutter, but this is to be expected.

The H6D-100c is currently limited to 25 fps shooting, although Hasselblad made clear that’s simply a firmware limitation and that other frame-rates could be possible. There is also an HDMI output which may provide some interesting options for external recording and an audio minijack input.

The H6D-100c is actually two parts – a back with the sensor and processor inside, and the main camera body which handles most of the controls and connects to the lenses. The body accepts Hasselblad’s HC line of lenses – the very same ones that are rehoused by ARRI for the Alexa 65. The problem for moviemaking is that the standard versions are physically much more like modern EOS or Nikon lenses than cine lenses. Like most modern stills glass, they are designed for autofocus. The flange distance of the H6D body means that adapting the camera to PL or other mounts isn’t possible. Luckily, there is a cure.

Enter Alpa, a long established technical camera maker from Switzerland. They are coupling the medium format back from the H6D 100c (and other makers’ backs) with various different medium format stills lenses using an interchangeable mount plate system.

By using the Alpa body, you have access to the widest possible range of medium format lenses all on the same camera. Some of the older manual focus stills glass like the Hasselblad F, Pentax 645, Mamiya 645, and Contax 645 lenses are much better suited to filmmaking with their long focus throws and smooth operation. These can all be easily mounted to the Alpa with the right mount plate. You can even use large format lenses on the Alpa if you like to achieve tilt and shift movements in medium format.

The Alpa camera bodies are essentially coupling boxes that mate lenses with a digital camera back. The clever part is that the Alpas can control various operations with electronic lenses, and can also introduce tilt and shift movements if you add the appropriate parts. The back retains control of exposure and is powered externally.

I suspect that will probably change as filmmakers figure out the potential of the Alpa system. It seems entirely possible that lens makers could design medium format lenses specifically for the PL flange distance. For many existing medium format stills lenses there are likely to be issues with the size and clearances of rear glass elements that prevent rehousing. It may however be possible for some shorter flange distance medium format lenses like those for the Mamiya 7 to be converted to PL for use the Alpa. Lens rehousing specialists like TLS are sure to be on the case if the demand is there.

It’s also worth noting that the Alexa 65 uses the larger XPL mount with a longer flange distance than regular PL, so its lenses can’t be mounted unless Alpa make an XPL mount.

For now, even though the PL mount exists, it would seem easier to use vintage stills lenses in their native mounts with the correct Alpa mounting plate.

The huge advantage that the Hasselblad/Alpa combination has is size. The system is relatively small and very easy to transport. A complete kit could comfortably fit into a backpack. It is actually small enough to fit into very tight spaces like car interiors.

Hasselblad and Alpa themselves are honest about their hopes for the video mode on the back. They don’t really see it as direct competition to any of the established cinema brands like ARRI. That said, few foresaw the rise of the 5D mkII as a video camera, either. I suspect they may be underestimating what they have created.

Although the Hasselblad/Alpa 4K UHD image quality is unlikely to be in the same league as the Alexa 65, it is still going to be good enough for many uses. For now, I expect that the Alpa/Hasselblad setup will be more popular for movie visualisation, or video by fashion, commercial, and architecture photographers seeking the same aesthetic for their video as their stills. It may, of course, become more widely used than that; only time will tell if DPs take the little Alpa and its small form factor to heart. 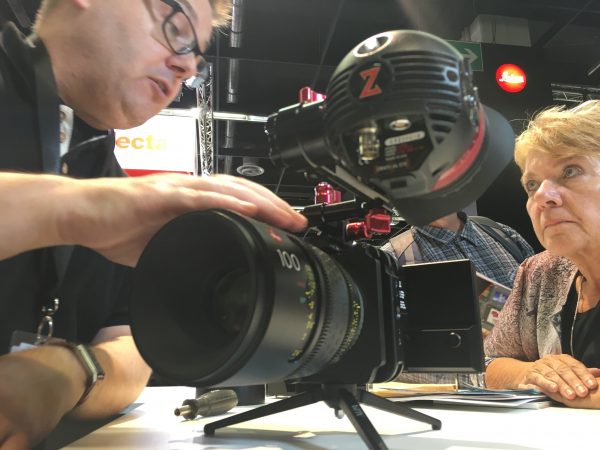 So there you have it. To my knowledge this is the first PL-mounted medium format 4K RAW video shooting camera you can actually buy. Of course, there is one big company who could really get things going for medium format video and that’s Sony. They actually make Hasselblad’s, Phase One’s, Pentax’s, and Fuji’s medium format sensors but currently don’t make their own camera. If they enter the large sensor camera market, things could get really interesting.

You can find out more about Alpa cameras on their website.