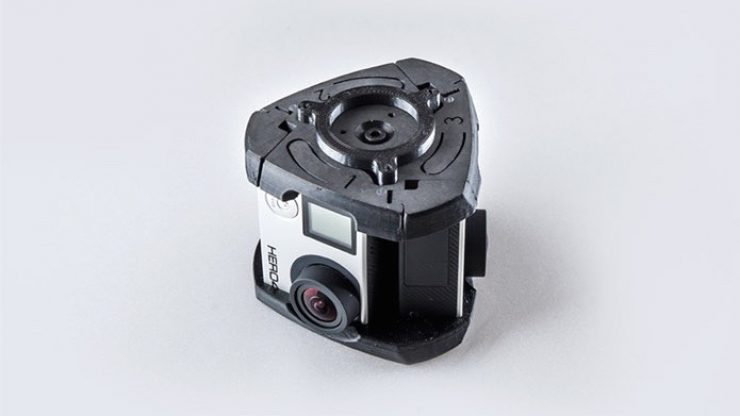 No VR filmmaker’s kit is complete without a few homespun solutions, like compressed air to cool off your cameras in hot weather and duct tape (just in case). But as more creators flock to the emerging medium, manufacturers are providing more ready-made solutions, like SEERCAM’s Cube Go3 and Cube Go7 VR rigs.

Both the Cube Go3 and Cube Go7 aim to address issues that weren’t thought through in first-gen rigs, like access to inputs, battery and settings.

Both rigs offer solutions that make it possible to keep cameras mounted throughout the shoot. Camera settings and inputs can be accessed while mounted, and display lamps give videographers a quick and visible status report. The Cube Go3 also allows you to detach the batteries while the cameras are in the rig.

Perhaps the most stand-out feature of the Cube Go3 is the all-in-one recording pin, which makes it easier to sync recording times without a remote (SEERCAM still recommends using a remote with the Cube Go7).

The Cube Go3 can hold three GoPros and only works with cameras with angles of view greater than 220 degrees. It would be interesting to see a sample of the rig in action, compared to similar three-camera setups like the Freedom360 Broadcaster 3X ($374), which utilizes three GoPros equipped with modified lenses with fields of view beyond 180 degrees.

However, a three-camera solution like you see on the Cube Go3 might be a perfect solution for a budding 360 videographer who’s still stocking up on enough GoPros to go full-on Omni or Odyssey. Rather than purchasing six Hero 4 cameras at roughly $400 a pop, you can get away with buying three now and three later, when you’re ready to improve your video quality.

One key feature of the Cube Go7 is its design. It places six cameras in a horizontal ring—an abbreviated version of GoPro’s Odyssey setup ($15,000 for the rig, 16 cameras and accessories)—but also includes a detachable upper camera mount, bringing the total camera count to seven. Having that seventh camera on top might make stitching easier when filming anything with action occurring above the rig, rather than around it.