This year at the IBC show in Amsterdam the big thing is lenses. It seems that every major lensmaker is debuting something new and interesting. Photo lens giant Sigma announced their new Cine lens line a few days ago and since then the video community has abuzz with the prospect of lower cost, high quality cine zooms. There are 18-35, 50-100, 24-35, 20, 24, 35, 50 and 85mm lenses.

Ahead of the show Sigma’s Shinji Yamaki gave me a close up look at the lenses and answered my questions about the lens performance and design. The lenses are still pre-production versions and so we weren’t able to shoot with them yet – hopefully we can do that in the not too distant future.

He was able to confirm that all the lenses have the exactly the same optical design as their stills counterparts. The big difference is in the usability for filmmaking – they have all new metal housings with 180 degree focus rotation, 95mm lens fronts and cine gearings. 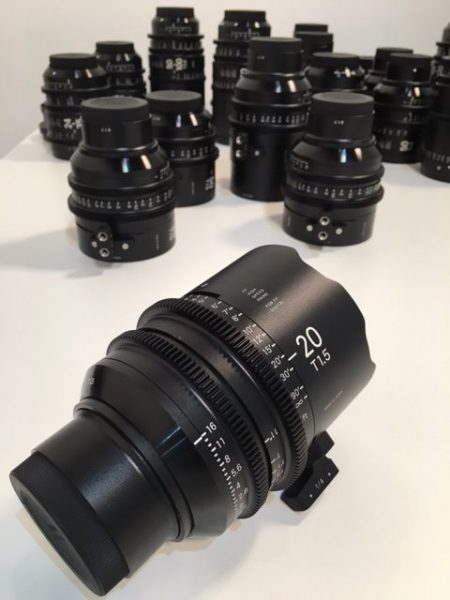 In the hand the lenses feel extremely solid, yet not too heavy. They are substantially larger than the stills versions, but not unusably so for handholding. They have the same nine blade iris as the stills lenses.

On the downside the lenses still have the same breathing as their still cousins. Yamaki also explained that the zooms were chosen for their near parfocal behaviour, but that they are not 100% parfocal.

The lenses will come in EF, E-mount and also PL (apart from the 24-35mm). Yamaki told me that these are interchangeable, but only at a Sigma service facility.

They had several setups on display with the lenses on gimbals, drones and with follow focus. The size and weight of the lenses certainly lends them to lighter weight production with mid sized cameras like those from Canon, Sony and RED.

Each lens has a filter thread, apart from the 20mm which has a bulbous front element. The idea is that you can attach a simple screw in filter if you need, or use a screw in filter in addition to mattebox mounted filters if you need several in combination.

The 18-35mm and 50-100mm lenses will come first in a few months time, with the other lenses anticipated to follow early next year.