Like many shooters I use Sigma’s photographic zoom lenses extensively for my video work. The 18-35mm f1.8 and 50-100mm f1.8 Art lenses have a permanent place in my kit bag. Now the Japanese lens giant has set its sights firmly on the burgeoning cine lens market and today announced cine versions of three of its zooms along with a range of fast primes – all based on their stills lens counterparts but with new all-metal bodies, expanded focus throws of 160 degrees and 0.8 pitch geared rings for follow focus and FIZ control. Sigma say all the new lenses also share common colour reproduction and are optimised for pleasant bokeh. 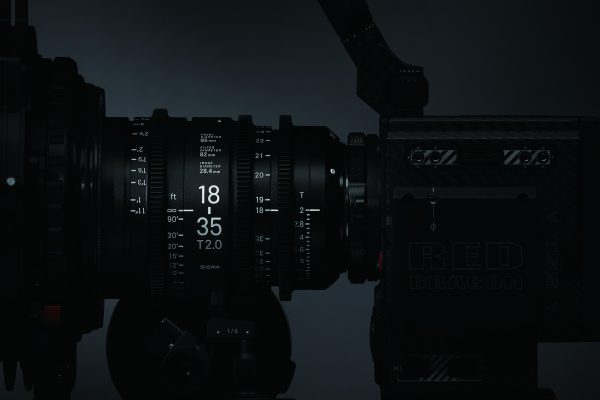 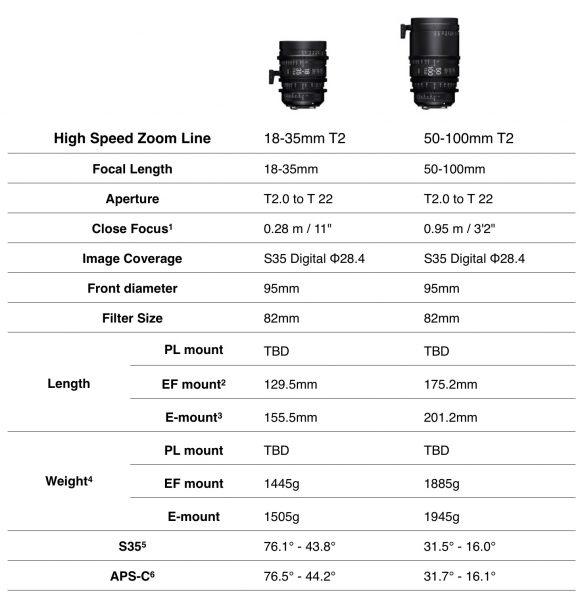 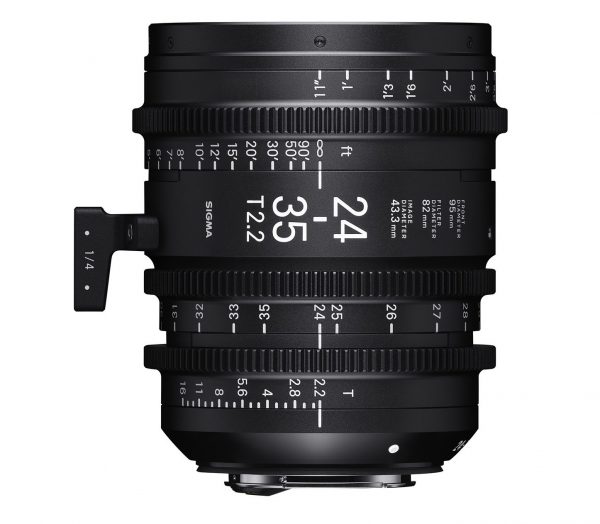 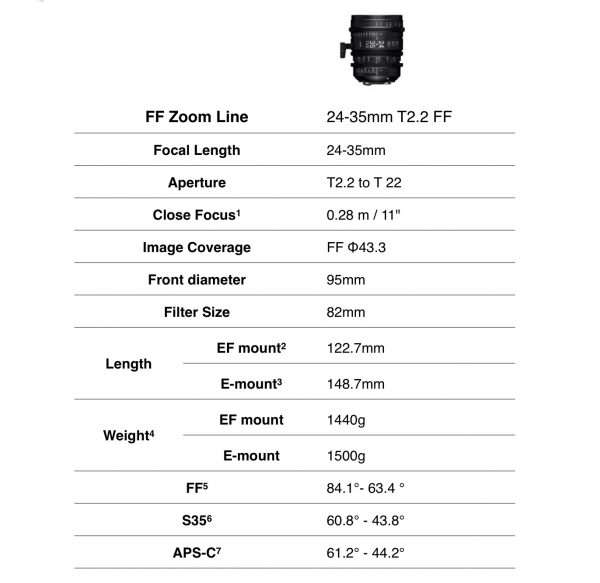 The T2 zooms are due before the end of the year in the US and Japan. There is no word on dates in other territories yet. Along with the 24-35mm in the second wave of releases will be five T1.5 prime lenses reaching from 20mm to 85mm.

Each is able to cover full-frame and again share a 95mm O.D. and all but two have a 82mm filter thread. The only exceptions are the 85mm which has a larger 86mm filter thread, and the 20mm which does not accept a screw-in filter because of its bulbous front element. The lens gears on the primes are spaced the same on all lenses to allow for easy interchanging of lenses without having to re-position follow focus or iris control units. Interestingly it appears that the EF mount versions (and maybe E-mount) of the lenses have electronic contacts and should therefore be able to communicate lens data to appropriate cameras.

It also isn’t clear whether Sigma has done anything to the design of the new lenses to reduce breathing (quite obvious on the stills version of the 50-100mm) and to ensure that lenses hold their focus as they zoom.

The primes are a bit lighter than the zooms, weighing between around 1.1 kg and 1.5 kg. The astute will notice that there is currently no stills 85mm ART lens and I am going to bet that Sigma has new optics for the cine version that will find their way into a stills 85mm f1.4 ART shortly. 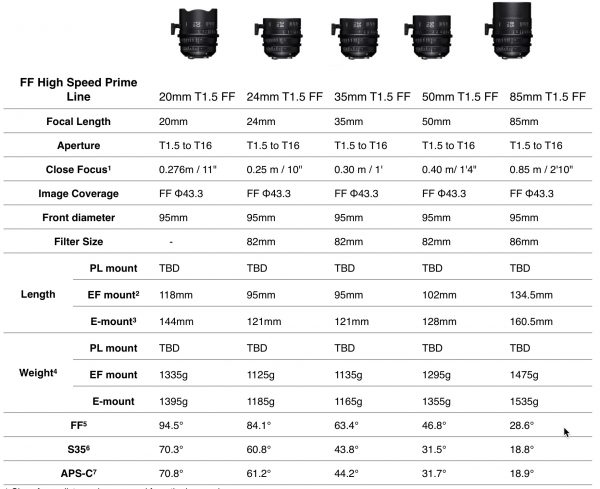 Sigma controls its own mass production facilities at its Aizu factory and is clearly in a position to produce high quality lenses in volume – something that smaller bespoke makers cannot hope to compete with. I expect its pricing to be extremely competitive, just as it is for their photo lenses. I also suspect that these are just the first in a wide range of Sigma cine lenses and I for one are glad that the Japanese lens giant is getting into the cine game. 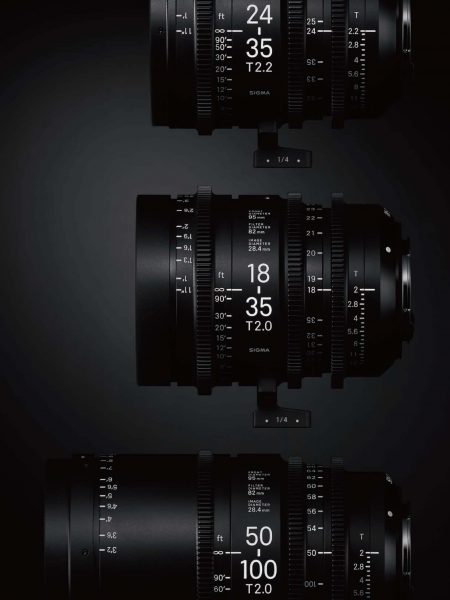 We’ll be checking these lenses and all the other new gadgets out at the IBC show in Amsterdam starting this Friday. Stay tuned. 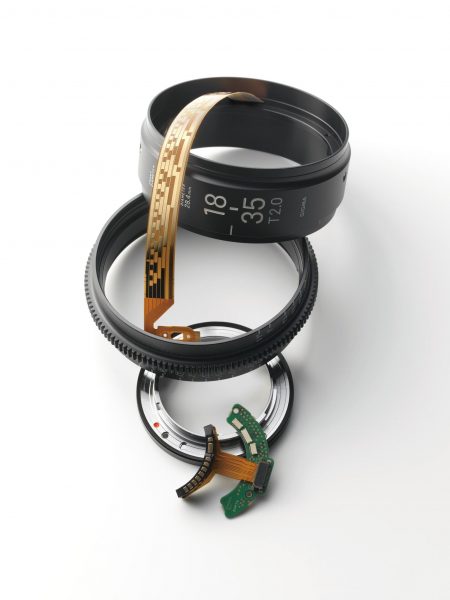 The product page for the lenses is here.

Announcement of SIGMA CINE LENSES
The SIGMA Corporation is pleased to announce that it will enter into the cinema lens market by releasing a new line of SIGMA CINE LENSES, designed specifically for cinematography. In the world of digital film production, there is an increasing demand for higher resolution, and SIGMA’s new lineup of high-performance lenses is compatible with the latest, high-resolution digital cinema cameras. SIGMA has developed its own production system by establishing the required technology for mass production of high-performance lenses for ultra-mega-pixel shooting. 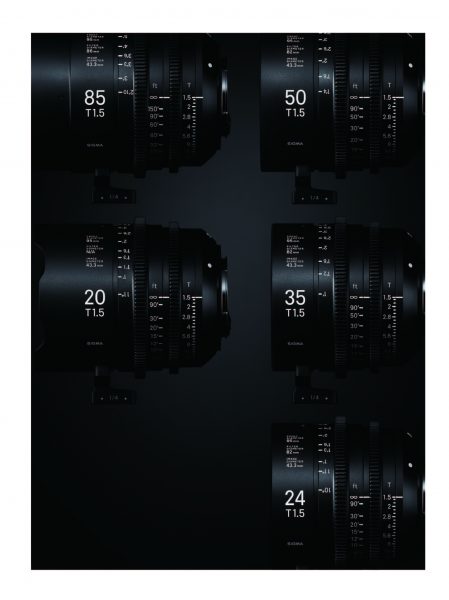 The company feels this valuable new lens line could create a fundamental change in digital film production, and provide a new solution to cinematographers.

For the first phase, SIGMA will release two zoom lenses in Japan and the USA for EF and E mount camera systems. Furthermore, another zoom lens and five prime lenses will be released to the market in sequence from 2017 onward. SIGMA plans to develop additional zoom and prime lenses as well as add support for PL mount camera systems. The latest release information will be sequentially updated on its official website.

Delivery: toward the end of 2016 (in Japan and USA in the first phase)
Price: TBD
Mount: Initially Canon-EF and Sony-E to be followed later by PL.
*24-35mm T2.2 FF is not available in PL mount.
* The appearance and specifications are subject to change without notice.