A good tripod is one of the essential parts of any shooter’s kit. Like many TV camera operators I’ve come to rely on the Sachtler Video 18 S1 as my day-to-day tripod. It is without doubt the most commonly used tripod in broadcast news and you’ll see it supporting ENG cameras at most newsworthy events. It works well in extremes of temperature, from the hottest to the coldest environments.

I use mine with an ENG camera when I’m shooting TV news, but also with all my cinema cameras. With it, I get stability and also beautifully smooth moves. It has no problems supporting my fully loaded Sony F5 setup, or even a Blackdesign URSA that we sometimes use to cover things here at Newsshooter.

Earlier this year Sachtler refreshed the Video 18 S1 with a new version, the Video18 S2. I’m very happy with my S1, but when they offered the new tripod for long-term testing I was curious.

The S2 looks identical to the S1 from the outside. Virtually nothing has changed apart from the logo. The S2 still has a 100mm bowl, a useful 16 stages of counterbalance and 7 stages of friction adjustment for both pan and tilt. The difference is that it now has the ability to support a wider load range. It can balance heavier cameras up to 20kg and lightweight cameras right down to around 2kg. The new head weighs 4.1 kg – slightly more than its predecessor, but it’s a worthwhile tradeoff.

In practice, this means I can now use the same 18 S2 head for mirrorless setups like my Sony a7S II with 28-135, as well as for a F5 or Amira with heavier PL cine glass, monitors, transmitter, the works. It really is one head for practically everything.

Obviously, if you only ever shoot on smaller cameras, you won’t need to go all the way up to the 18 S2. The recently launched FSB10, for example, should be just fine for a c300 or FS7 setup. I use an even smaller FSB6 or Miller Solo on my mirrorless cams. But what’s great about the 18 S2 is that I know that if I have it with me on a shoot I can handle practically any camera that the director or producer is going to want to use, and that is very reassuring. 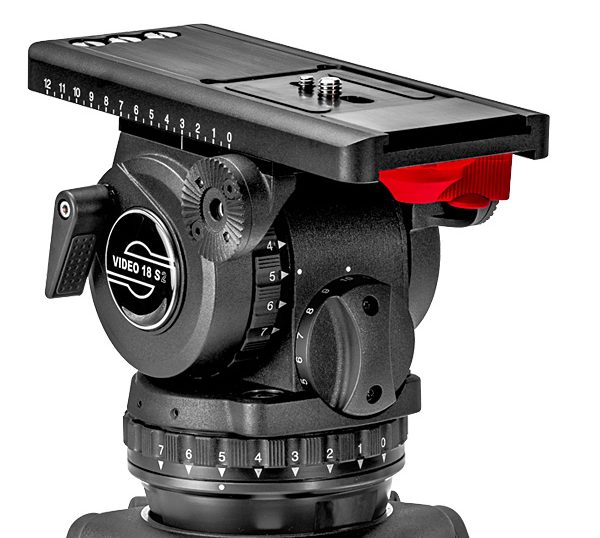 Would I change my 18 S1 to the S2? Probably not. While I appreciate the extra range I already bought the smaller FSB6 to fill in on those occasions that I need it. I have access to the bigger Video 20 also. What I have already works really well enough and I can’t justify spending more to upgrade. If I didn’t already have the 18 S1 then going for the S2 would be a no brainer; it is a better head for the same price that the S1 used to be. If I ever win the lottery I’ll change over for sure.

I believe the versatility of the 18 head is improved even more by adding an extra set of legs. Like an increasing number of shooters I use mine with Gitzo lightweight legs when I need to travel a bit lighter. This is something I first learned about from shooters I know at NBC news. The Gitzos are short enough to fit in a suitcase with head removed, and the largest one can go way over my head to ceiling height – something the stock Sachtler legs can’t do. I now keep the Sachtler legs in my car, and my Gitzos in my go bag.

Having had some time to test the 18 S2 I can safely say it delivers exactly what it is supposed to. Your tripod might not be the sexiest bit of kit you own, and the 18 S2 certainly isn’t the cheapest either. But the 18 S2 is a great long term investment in getting better shots, and that, after all, is the name of the game.

You can find out more about the Video 18 S2 on the Sachtler website.