Canon have today announced their new flagship C700 shoulder-mounted cinema camera. It has a 4.5K sensor and actually comes in two versions, one with a regular CMOS sensor and the other with a global shutter (GS) CMOS sensor, which eliminates rolling shutter at the expense of a slight loss in sensitivity. Canon claim 15 stops of dynamic range for the regular version, the same as the C300 mkII and I suspect the sensor and overall image is very similar. 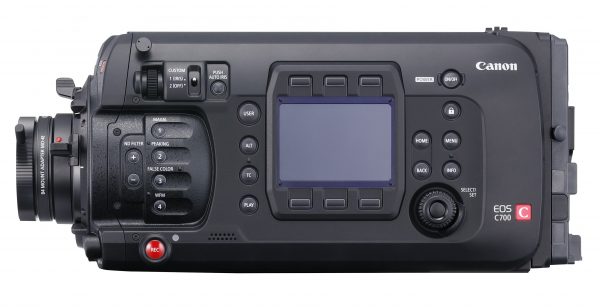 There are a wide range of recording options and for the first time in a Canon camera there is now the welcome addition of Apple ProRes in several flavours.

The camera will come in both PL and EF mount versions and you can change between the two if you buy the additional mount – although changing from PL to EF mount may need to be done at a Canon service facility. 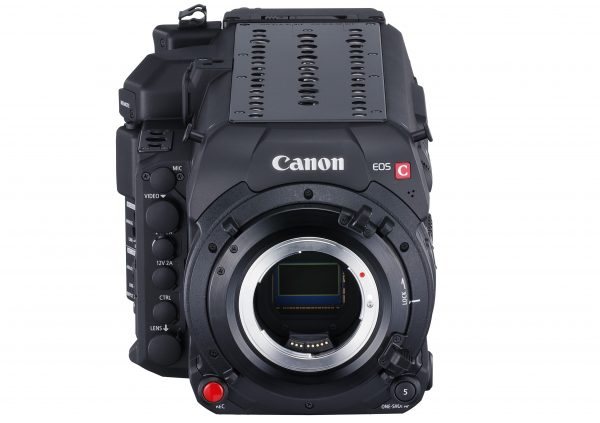 The EF version has Canon’s excellent Dual Pixel CMOS AF system, as seen on the C300 mkII. Sadly, there is no sign of a touch screen like the one on the 5D mkIV that would allow quick and easy focus point selection.

It will be offered as a body only, to which you can add Canon’s new electronic viewfinder (EVF), baseplate and rod riser, EF Lens control grip all at extra cost.

I was lucky enough to get hands-on with a pre-production version of the camera a short while ago and talk to one of the team behind it. So far, what I’ve seen looks like a great camera, but this is definitely a premium product with pricing to match – anyone hoping for a camera close to the price of the C300 mkII, Sony FS7 or Sony F5 is out of luck.

The body design is much more traditional than previous Cinema EOS cameras. Many users have lobbied for a shoulder-mounted camera from Canon and their wish has been granted. It is very solidly made and there are lots of threaded holes on the top and bottom of the camera for mounting with just about any support or accessory.

The control layout is also similar to ARRI’s and Sony’s with all main menu items available directly from the side panel. There is a detachable remote panel, very much like Panasonic Varicam’s, that mirrors the camera controls. It can be tethered or placed on the dumb side of the camera so that an assistant can adjust settings easily.

Also towards the front of the dumb side of the camera are 12 and 24v power outputs to enable the use of motors and lens accessories. The inclusion of these features signal Canon’s clear intention that this camera should be used on the sets of movies, high end TV and commercials.

This is no lightweight either; it is similar in weight and size to cameras like the ARRI Amira and Panasonic Varicam. The long body does make for an easy-to-balance camera that feels at home on the shoulder.

If you want to record higher frame rates internally then you need to drop the resolution. Using a centre crop mode you can shoot 180fps 2K/HD in 10-bit Prores 422. If you shoot in XF-AVC  you can get 2K/HD 120fps from the full Super35 sensor area and 2K/HD 240 fps from a crop of the sensor. 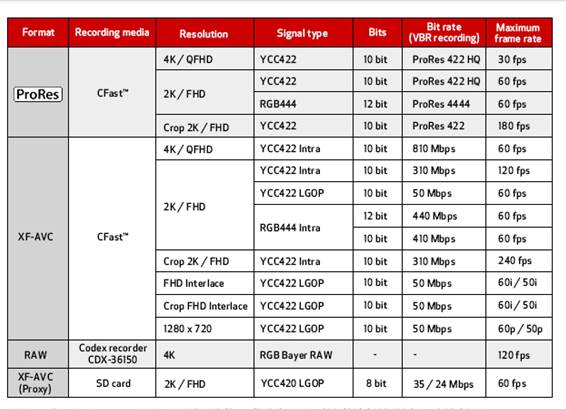 There is also the optional dedicated Codex CDX-36150 recorder that docks neatly onto the rear of the camera, replacing the V-lock battery plate. Record to this and your options increase dramatically. The headline feature is 4K RAW recording at 120fps. You will also be able to capture 4.5K RAW using the full width of the centre (the standard 4K presumably crops off sides of wider than 16×9 aspect sensor) at up to 100fps – this feature will come in a future firmware update.

It can also record 4K ProRes at 60fps and 2K/HD Prores up to 120fps in 10-bit without windowing, presumably thanks to increased processing power. If you want 12-bit recording this too is increased to ProRes 4444 XQ at 60fps. Lastly, it can also record a 2K/HD crop at 240fps in 10-bit ProRes 422 HQ. There is no word on pricing or media for the Codex yet.

It isn’t clear at this stage what signals it can output via the quad SDI connections to other external recorders like the Convergent Design Odyssey 7Q+ or Atomos Inferno.

There is also an SD card which can record a 2K/HD proxy file in 8-bit 4:2:0 XF-AVC which may be handy it you want to create dailies or stream rushes quickly.

What is missing is non-windowed internal high speed recording. Canon argue that they don’t want to compromise the image and so won’t downscale the 4K sensor image internally at over 60 fps. This is in contrast to Sony who offer fast frame rates using a scaled image from the full S35 image. Canon’s continued resistance to this is guaranteed to infuriate some users. The good news is that now you can get up to 4K 120fps using the Codex recorder, but expect that to be an expensive option and probably out of the reach of most owner/operators. We can only hope that some of the additional recording options will also be possible using other cheaper third party recorders.

The other feature that is missing is optimised support for 2x anamorphic lens shooting. More and more films and TV series are now opting to shoot anamorphic and the Canon does not have the ability to record images that have a larger height than the S35 sensor. ARRI’s open gate system uses a physically larger image area than S35. The extra height is perfect for the image circle of most 2x Anamorphics and the resulting image is then desqueezed in post. The C700, even with higher overall sensor resolution, does not have the physical height and so changes the resulting look from a given lens. With Canon’s obvious desire to be in high end production it is a curious choice not to go for a larger sensor.

Unsurprisingly, much of the rest of the specification is similar to that of its sister C300 mkII, just upgraded slightly. Some of the parts even look like they are the same as the mkII. There is the same neutral density filter system that goes from 2 to 10 stops. The CFast 2.0 cards are now on the dumb side of the camera but have a similar door arrangement.

On the audio front, the C700 has two XLR inputs with phantom power. The minijack in offers two more inputs making a total of four. It would have been nice to be able to use the C300 mkII’s MA-400 Microphone Adapter to add an extra two channels of XLR audio in the same way that you can use the Sony XLR-K2M to add to the FS7, but sadly this is not an option. There is also no Canon option for a slot-in wireless mic receiver as yet. There is a nicely designed shotgun mic holder that is pictured with the camera. I assume this comes with it.

Iris control of Canon EF lenses has been moved from the rear of the camera on the C300 mkII to a new position near the front on the operator side. You can also control it via the optional servo control grip. It does not appear that you can use the C100/C300 control grip on the camera but I wasn’t able to confirm this.

The gammas are the same and Canon Log 2 and newer Canon Log 3 are there alongside regular gamma options. I expect Canon will make a great deal of their colour science and it remains one of the strongest reasons to opt for a Canon over other Japanese brands.

The EVF is a substantial affair and priced close to other high end EVFs. It has several customisable buttons, some of which are oddly on the top right side, as well as the more normal operator side. The EVF uses a proprietary Canon connection – the same as the one on the C300 mkII. This will limit its use to the C700 and C300 mkII, unlike the Panasonic Varicam LT’s EVF, which uses a regular SDI connection.

The bracket that mounts the EVF to the camera is solid and has a reasonable range of movement so you should be able to get comfortable with it to your eye. Canon said they will also offer a bracket to mount the EVF on the C300 mkII should you want to. You can of course use any third party EVF that has SDI connections if you want to keep the cost of your camera package down.

The baseplate is another option and does not come with the camera as standard. It allows the camera to be quickly attached to a Sony VCT style quick release, has a large, comfortable shoulder pad and rods. You can of course use other makers’ baseplates should you want.

The camera does not come with a control grip as standard. Instead, there is an optional servo control grip that attaches via rods to the front of the camera. This is similar in look and function to, but not the same as, the grips on the Canon CN7 Cine Servo and 18-80mm T4.4 Cine Servo zooms. It allows control of most lens functions and some camera controls, effectively turning the C700 into an ENG style camera.

Talking of ENG there is also a new Canon B4 optical convertor that allows you to mount 2/3 broadcast lenses to the C700. Like similar adapters from ARRI, Sony and MTF Services it expands the image from a 2/3 lens to cover the approx 1 inch centre crop area of the sensor. This works with the 2K/HD mode of the camera.

So far I haven’t been able to shoot anything or see an image from the camera, but I have no reason to expect it to look substantially different to the C300 mkII. We will of course be following this camera closely and update you with any new info we get.

UK suggested pricing for the camera is as follows (all prices inclusive of tax):

I suspect this camera will be one of the products to draw the largest crowds at the upcoming IBC show in Amsterdam and the Newsshooter team will be there to check it out.

What do you think about the C700? Feel free to join the discussion and comment below.