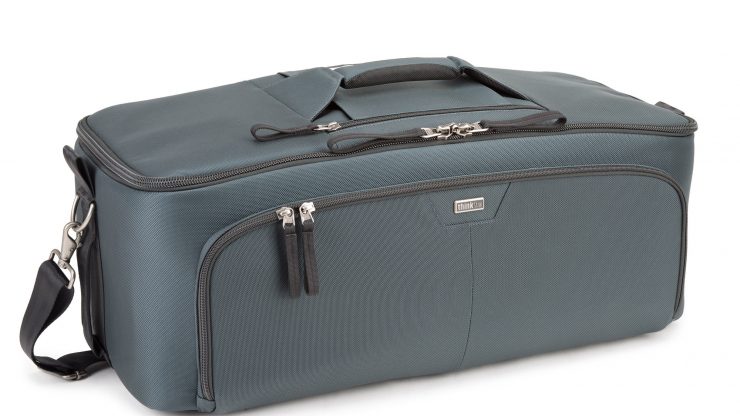 Think Tank are synonymous with stills photography bags, but recently they have branched out to making video specific soft-sided camera cases. I have been putting their new Video Workhorse 25 bag through its paces for the last three months. The concept behind their new bags is to give shooters the ability to hit the ground running by allowing you to leave your camera fully assembled. This is key for run and gun, news and documentary shooters, as there is nothing worse than turning up on location and missing a shot because you’re still putting your camera together. 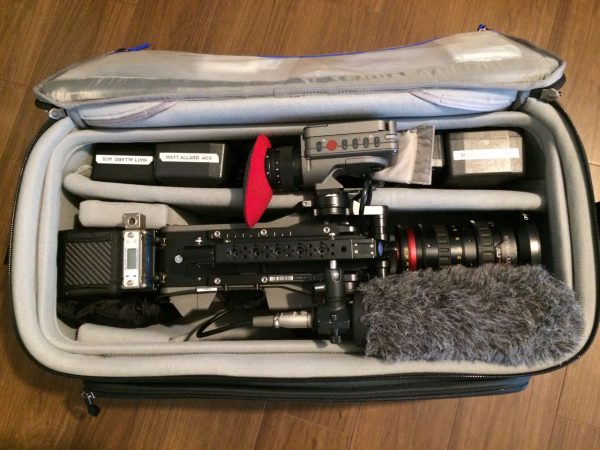 The Video Workhorse 25 I have been using is the biggest bag in the Video Workhorse range, and it is designed to take very large ENG rigs and cameras like the Arri Amira. The bag is also big enough for a multitude of other smaller cameras such as the Canon C-series, Sony FS700, FS5, FS7, F5 or F55, Red Epic/Scarlet and Black Magic Ursa or Ursa Mini. 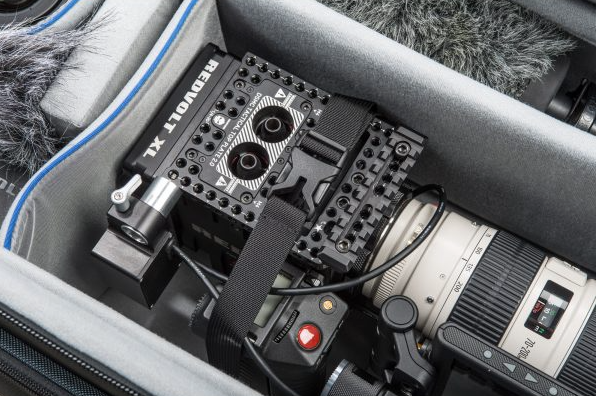 It’s very difficult to find a bag that will take a fully assembled large camera or a smaller camera that has been built up with a matte box, follow focus, EVF, monitor and a shoulder rig.

Most people end up using bags such as the Porta Brace Rolling ENG-Style Camera Bag. While there is nothing wrong with this bag, it is completely soft and offers very little protection for your camera. A lot of people use this bag to take their cameras on board aircraft, but with external dimensions of (77.5 x 40.6 x 42.6 cm), it is technically a lot bigger than what airlines allow (55 x 38 x 20 cm).

The Video Workhorse 25 is certainly no different when it comes to physical size. With dimensions of 71 x 32 x 36 cm, it is smaller than the Porta Brace offering, but again it’s technically too large to take on board a plane as a carry on. I find the only way to take my Amira on board a plane is to break it down and put it in a Kata (now Manfrotto) bag that falls within airlines’ carry on size regulations. What I have been looking for though is a bag that I can keep my Amira in fully assembled and use day-to-day. This is where the Video Workhorse 25 has a big advantage over the Porta Brace offering. 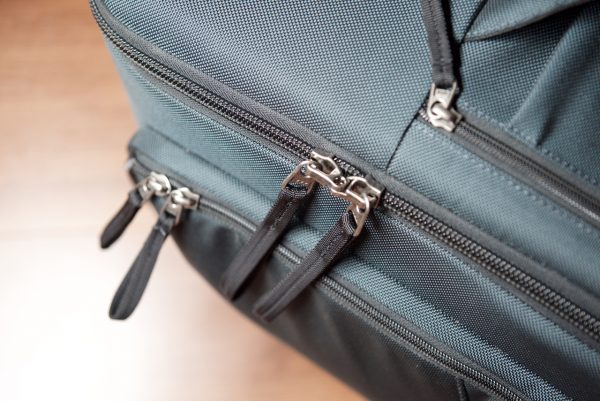 Think Tank have designed the Video Workhorse series to be stronger than soft bags, and lighter than traditional hard cases, all with the added advantage of having plenty of storage space. Build technology features ballistic nylon, YKK RC Fuse zippers, welded metal hardware, nylon seatbelt webbing and high density closed-cell PU foam. The bag also has striated aluminium and an arched twin wall, as well as a reinforced top lid and struts to create a collapse-proof top. 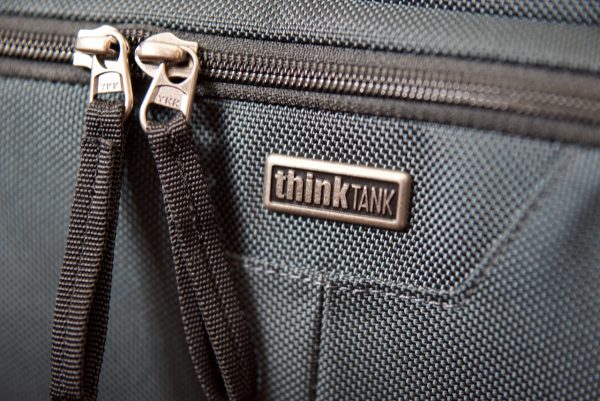 Even though it is a soft bag, the Video Workhorse 25 feels like a hard case. It weighs just 2.8–3.6 kg (6.2–8.0 lbs) depending on what accessories and dividers you leave in the bag. This is less than the Porta Brace Rolling ENG-Style Camera Bag which weighs in at 4.3 kg (9.5 lb). The build quality is absolutely superb, and the reinforced zippers are one of my favourite features. Too often I have had zippers on so called ‘professional camera bags’ fail and break. 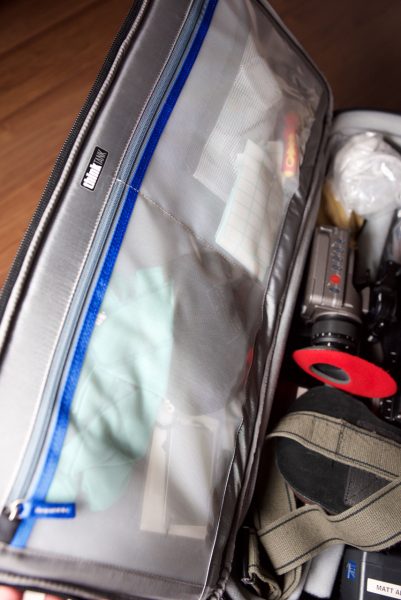 The bag comes with padded dividers that can be moved or completely removed depending on your needs. There are also nice clear mesh pockets in the top of the lid where you can keep accessories or important things such as media cards. In the front of the bag there is also a large zippered section that has plenty of room. On the top of the lid is another small storage section and a spot for you to put a business card. On the back of the bag there is a strap where you can insert a trolly, which comes in very handy.

I use a Kata trolley with the bag and have found it works very well. By not including their own handle or trolley, Think Tank have given you the option to use a suitable portable trolley from any manufacturer or to remove it when it isn’t needed. If you don’t want to use a third party trolley there is also a padded shoulder strap included, although I don’t use this much with the amount of equipment I am keeping in my Workhorse 25.

The whole top of the bag opens up and falls out of the way so that you have unobstructed access to your camera and accessories. This is something I don’t like about bags such as the Porta Brace. There is nothing worse than fumbling around trying to get your camera out and looking around for accessories. The Video Workhorse 25 allows me to keep my Arri Amira, fully assembled with a PL zoom as well as 5 V-lock batteries, media cards, card reader, portable light, smallHD 502 monitor, and a whole bunch of other accessories all ready to go at a moment’s notice. For day-to-day shooting I have the peace of mind that everything related to my camera is in one place. The only negative aspect of putting this much equipment in a bag is that it becomes very heavy and you really need to use it with a trolley.

As I mentioned earlier, the bag isn’t suitable for use as carry on baggage on a airplane. What I have been doing is breaking the camera down when I fly, and then putting it in my Kata bag. I then put other items into my Video Workhorse 25 (as it can hold a lot of stuff) and check it in. As the bag is so strong this isn’t a problem. When I arrive at my location I assemble the camera and then keep it in the Workhorse 25 so it is ready to go.

Ever since I got the Video Workhorse 25 my Arri Amira has lived in it. I have worked on a wide variety of jobs over the last three months and having the camera safely secured in a bag where it is fully assembled and ready to go has made my job a lot easier. The bag is built tough and when the camera is inside I don’t have to worry about anything falling over onto the case and potentially breaking my camera.

If you’re using a ENG camera or large digital cinema camera, there really isn’t a better option available that offers as much protection and storage space as the Video Workhorse 25. If you have a slightly smaller camera Think Tank also offers the Video Workhorse 21 and 19. The 19 is the only one of the three bags that you could probably realistically take on board a plane as carry on luggage.