I often get to shoot first person stories – a story told by the subject themselves – for Al Jazeera here in Japan. I enjoy doing these as they let the person tell their story instead of letting a reporter or correspondent do it. This approach allows you to showcase a subject’s personality, as well as provide a more accurate and honest account of who they are and what they do. 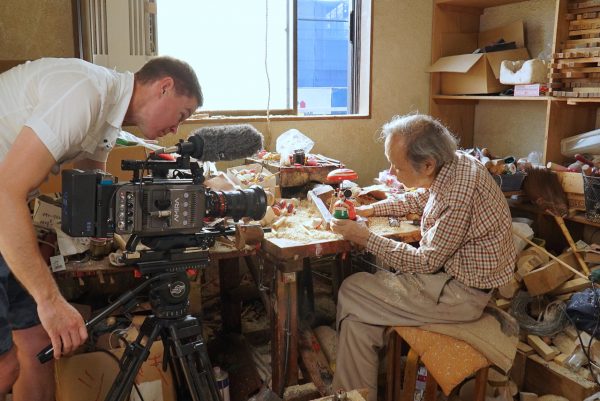 Recently I got to shoot a first person with an 80-year-old, fourth generation craftsman Masaaki Hiroi. Masaaki specialises in Edo period (1603–1867) spinning tops, and he’s created almost 4,000 over the last 50 years. His spinning tops are known for doing more than just spinning, with a lot of them featuring a humorous twist.

Like most of the stories I shoot, I didn’t get a chance to meet Masaaki before the shoot day or go to the location where I was to film. I usually work with a super talented producer-Aya Asakura. Without her knowledge, resources, and ability to not only find, but also connect on a personal level with our subjects, none of these shoots would be possible. Aya makes my job a lot easier as she has the rare ability to make most subjects we film feel comfortable and relaxed. 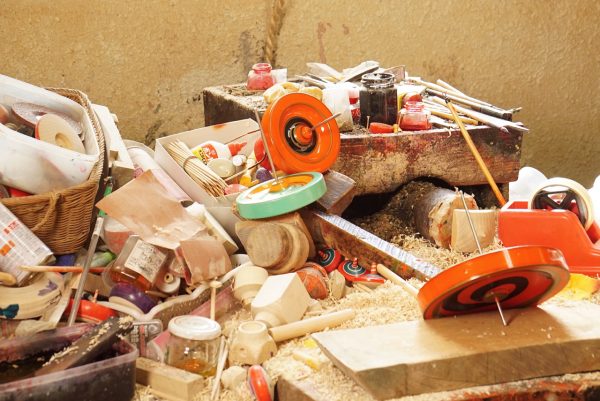 Arriving at the location I had no idea what to expect. Aya had shown me a photograph of the room where he worked, but a photograph can only show you so much. Masaaki lives in a ordinary house in suburban Tokyo, and anyone passing by would be none the wiser of the magic that happens inside. When I was first shown the room where he works, my initial reaction was where am I going to put the camera? The room had lots of character, but it was very small and there wasn’t a single place on the floor that didn’t have something on it. There was literally nowhere to put three legs of a tripod down. Luckily his son cleared away some of the mess on the floor, creating just enough space.

The room had two windows and a sliding door. I decided to open the sliding door to allow some more light into the room. This also gave me a spot to place a single Litepanels Astra Bi-colour soft 1×1 panel, that I further diffused with a Airbox Lights inflatable soft box. I wanted to add light without making it look like I was using a light. Outside the sliding door was a huge pile of wood, but by placing the tripod legs on the wood it gave me a bit more space to operate and another angle from which to shoot from. When I first started to shoot I left the main window closed as the sun was not in the right position. Opened, it would have produced a very unflattering light source. 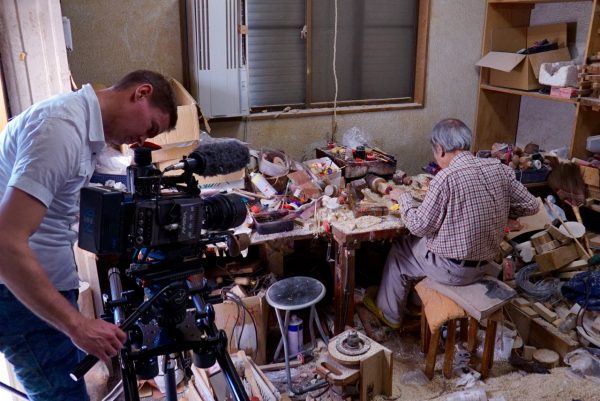 One of the first shots I got was by using a Rig Wheels Passport Camera Dolly. There was just enough space to set it up with one heavy duty Matthews slider stand on the stairs leading into the room and the other on the floor. There was barely enough space for the camera to pass between the shelf and the wall, but I made it work. I did the first shot on the dolly for two reasons. The first was that I only wanted to use it for one shot, and once I was done with it I could remove it without it being in the way for other shots. The second reason was for the purposes of blocking. The Al Jazeera style for first person stories always calls for a shot of the subject on camera to start. This makes cutting into your second shot sometimes difficult. I used the dolly to block my subject and then have not only him, but his work space revealed to the audience. I find a lot of people overuse a dolly or a slider, and don’t really understand the reasons for moving a camera. Movement shouldn’t just be done for the sake of movement, it should help tell the story. 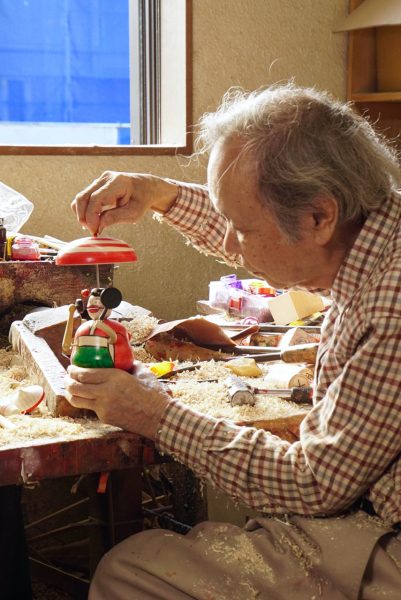 I don’t like making someone do something just for the sake of a shot or to make my life easier. I watched Masaaki make a small spinning top first so I had a good idea of the steps he went through and where I should best position the camera to get a good angle. Asking someone to stop and start a process that they usually do fluidly disrupts their rhythm and takes them out of their comfort zone. Letting your subject just do what they usually do without disrupting them ultimately gets you better results. This is even more important when the subject doesn’t speak the same language as you. 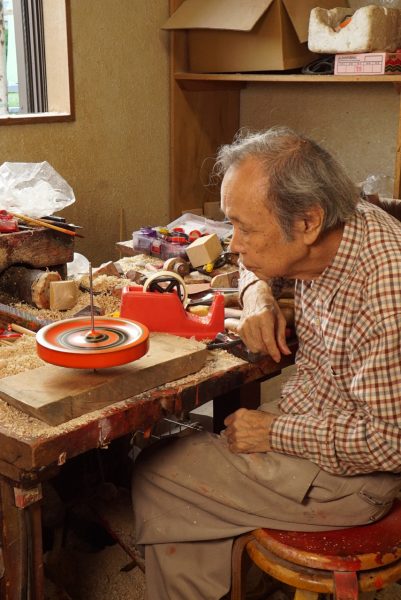 The whole concept behind what I shot revolves entirely around Masaaki. While the toys he makes are fascinating, he is the story. It is easy to get distracted by other elements when you are shooting, it takes a lot of discipline and understanding of your story to remain focused on what is important. If you are familiar with my work, I like getting a lot of tight shots and I am a huge proponent of getting facial expressions and little moments that help tell a story. I will often roll for up to five minutes on someone’s face until I capture a moment that is memorable. I don’t just think wide shot, mid shot, tight shot. Getting those shots means nothing unless they are helping to tell the story. 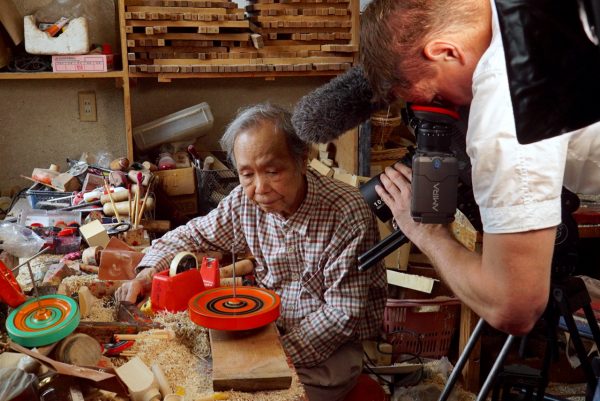 After watching Masaaki work I could get a real sense of just how much he puts into his work and just how much he enjoys it. There is not only a real skill to what he does, but also a genuine love for his craft. It was essential to me to capture images and moments that reflected this. I used only zooms and a 100mm macro to capture the images. I love prime lenses, but they slow you down, and when capturing actuality you just end up missing too many shots. I also don’t like getting my camera too close to my subject, particularly if I am filming their face. Getting close may work well with professional actors, but for people who are not used to dealing with cameras it makes them uncomfortable and too aware of the camera. I usually get as far back from my subject as possible, so they can concentrate on what they are doing and hopefully they almost forget that I am even there.

I’m usually one of the first people to say that slow motion is overused. Again it is a case of just because you can, you sometimes shouldn’t. In this piece there are quite a lot of slow motion shots because they help tell the story and illustrate something that can’t be seen by the human eye. The spinning tops move very quickly and to help show just how they actually work it was important to slow them down. I tried to only use slow motion when it helped tell the story, and refrained from using it when it wasn’t necessary. 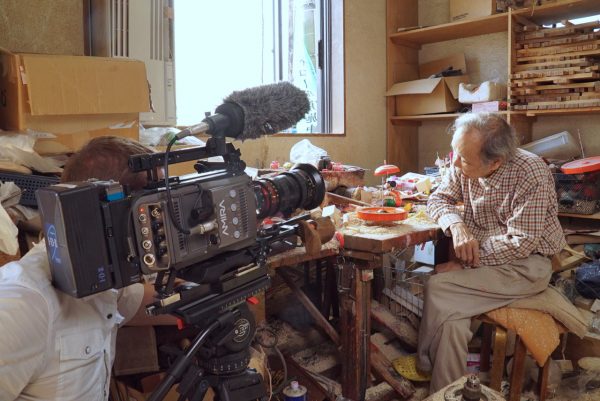 When the sun got a little lower in the sky I opened up the main window in the room to let the natural light pour in. I then filled it in using the Litepanels Bi-Color Soft 1×1 which was on a 90 degree angle from where the sun was. This really helped create some depth to the images and provide a nice strong back light source for a lot of the slow motion shots.

Getting the shots is only a small part of putting together a first person story. Aya and I formulate a list of questions that are carefully designed to help someone tell their story in their own words. Either before or after we shoot the subject we will do a sit-down interview that usually goes for around 20-30 minutes. From experience we usually find that it is better to interview someone after you have spent some time with them so they get more comfortable with you. On the flipside sometimes it is better to interview someone before you start shooting so you have a better idea of what you need to shoot to help tell the story. It really does come down to your subject as to what is the best approach. 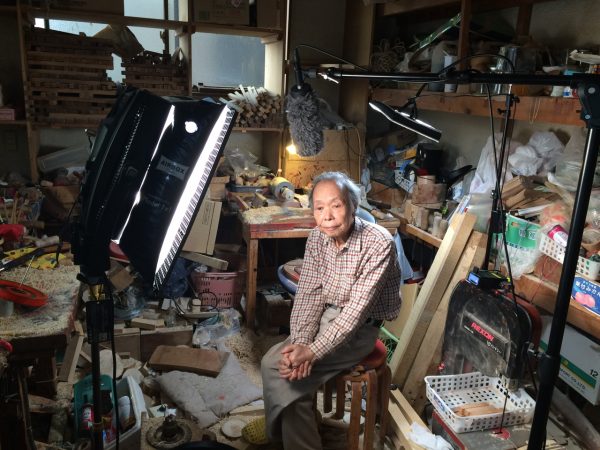 The interview was lit with two lights, the key light source was the Litepanels Bi-Color Soft 1×1 with a Airbox Lights inflatable softbox and a honeycomb grid. For a backlight I used the Westcott 1×1 Flex LED panel.

After the shoot Aya translates the interview and then together we go through the answers and collectively piece together a story. I then edit the story based on the answers we have chosen. I really like the creative freedom Al Jazeera gives us when doing these type of stories. It allows us complete control from concept to delivery which is very rewarding. 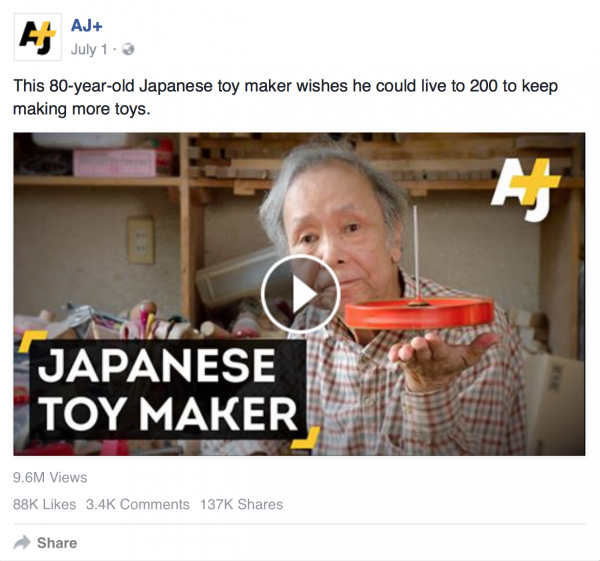 Al Jazeera’s online platform AJ+ put up a version of the story on Facebook and it has so far had almost 9.7 million views. There are more than three thousand comments and most of them about Masaaki. This means I have hopefully done my job as a storyteller as the audience has been able to connect with the character. Again it’s not about just getting some pretty pictures, it’s about telling a story that makes people feel something.