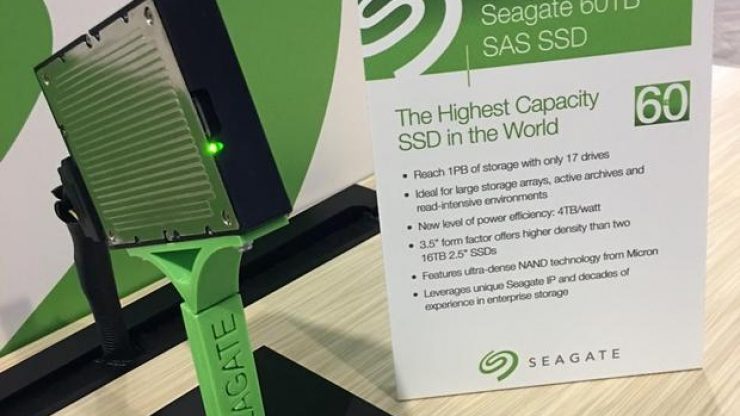 Storage company Seagate have unveiled a monster 60TB SSD at the Flash Memory Summit (yes there’s a trade show for everything) that’s designed to be rack mounted in data centres where there’s no desire to trade off between data capacity and speed.

It’s housed in a standard 3.5″ form factor drive and the company has hinted that the roadmap for the product will lead to a 100TB version in due course.

And although that might sound a little excessive, with camera manufacturers continually pushing up resolution and data rates, fast high capacity storage is going to be increasingly important for anyone shooting or editing footage. A RED Weapon shooting in 8K, for example, has a maximum data rate of 300MB/s, which works out at just over 1TB/hr for footage that’s as demanding on data throughput as it is on storage space.

Seagate’s new drive isn’t available yet and will be on the market, presumably to corporations very much richer than you, next year. But as an indication of the direction of travel for storage it couldn’t be clearer: spinning platter hard drives are going away and the pace of change is accelerating.