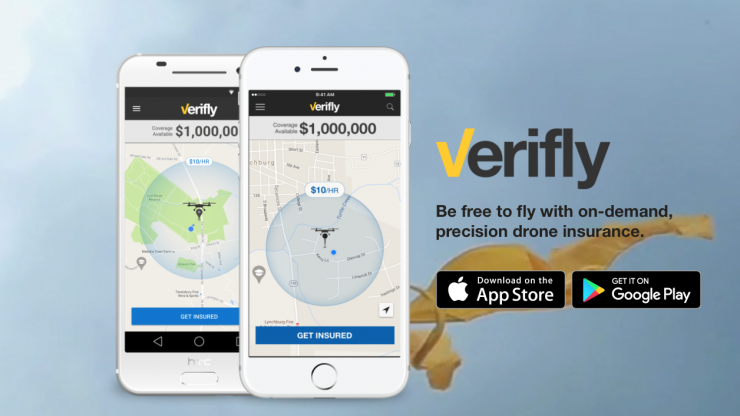 A company called Verifly is offering on-demand insurance for recreational and commercial drone flights. The app has been in development since 2014, and with more than 500,000 registered drones in the US alone, there is definitely a market for this service. The company will insure any drone under 15lbs (6.8kg) with up to $1,000,000 of drone liability insurance from $10 US an hour. The catch is the drone has to be within a 1/4mile (0.4km) radius of where you are operating it from. You can monitor on the app how much time you have left until your coverage runs out.

Verifly had to get approvals to operate state-by-state in the USA, since insurance isn’t regulated federally or by the FAA. The insurance is available in 41 of America’s 50 states. Verifly uses differential pricing to account for the higher risks involved in certain flights: factors include hazards within your coverage area (such as prisons, schools, stadiums, etc.) as well as environmental factors like wind speed. If a particular client needs to see proof of insurance Verifly allows you to forward your insurance certificate after purchase to any email address. You can also show the policy certificate on your phone, just like an airline boarding pass. 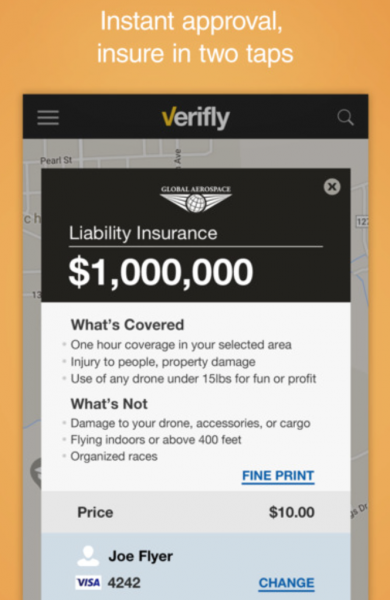 Verifly connects you with policies “on demand” with no long-term commitment. You are only charged for what you need at any given time.

Verifly looks to be an interesting concept and it certainly adds a level of protection and peace of mind for drone users. Whether it will be available in other parts of the world over time will be interesting to see. The legal approvals alone could take years to complete.

Verifly can be downloaded from the App store or Google Play. If you live in the US and have tried Verifly let us know in the comments below.