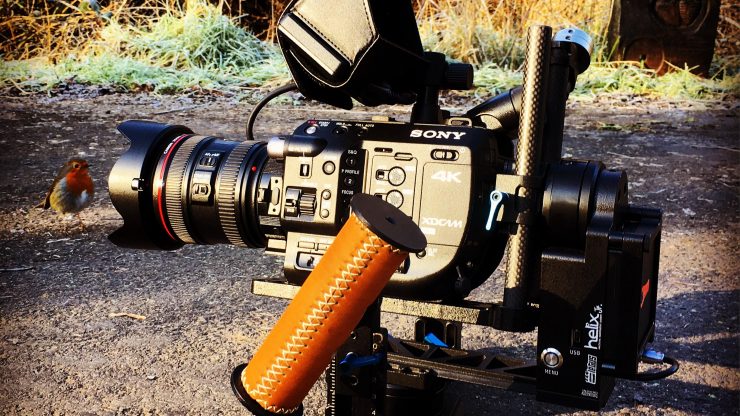 Pre-ordering the FS5 last autumn was a no-brainer. I’ve always been a believer in owning my own kit despite the perceived wisdom that it’s foolish to invest in cameras. But, given the ridiculous speed at which cameras are made obsolete in our industry, I didn’t want to invest a lot this time (I can always rent better cameras if needs be). The FS5 was perfect with its cheap media and cheap price (compared to the Canon C300 mkII). I liked my ageing C100 but it was crappily designed from an ergonomic perspective and a hassle to use, needing an Atomos Ninja Star to be bolted on to produce better images using ProRes. The FS5 ticked all the boxes as a great HD documentary camera with the added bonus of limited 4K abilities to play with. I was also excited about the slow motion capabilities, the variable ND filter (AMAZING!) and the clear image zoom (extremely useful for run-and-gun). Finally, the prospect of getting an extra stop of light from all my Canon lenses using the Metabones Speedbooster Ultra really made the decision easy.

My shiny new camera sat on the shelf for a few weeks as I read daily updates from the Sony FS5 user group on Facebook (an amazing and highly recommended resource), trying to get my head around the different flavours of S-Log and the recommended exposure techniques. Then I was presented with the perfect opportunity to fully test the camera. A local engineer, the talented Nick Broadbent, hired me to make a Kickstarter campaign video for his new, snazzy bike pannier rack.

The challenge was filming the product in a dynamic and interesting way. We did a studio shoot using a slider mounted at an angle and a homemade turntable, then headed outdoors, using a GoPro 4 on a DJI Phantom to get some lovely establishers of the bike riding out on those famously crisp English winter mornings. But for the ground level stuff, hanging out of a car window filming the bike wasn’t going to cut it for this shoot. I love to move the camera as much as possible and I wanted to film on bike paths without car access. I needed to film from behind and from a low angle to show off the bike rack in action. So I put my client to work: we rented a cargo bike and I knelt inside while Nick pedaled me along following our cyclist with a Tailfin fixed to their bike. Not as easy as it sounds! The main problem was the bumps introduced by kneeling in a cargo ‘basket’ riding along bike paths. I convinced myself I needed some new kit to achieve the necessary smooth motion and after researching stabilised gimbals discovered the Helix Jr.

I’d tried a Movi and a Ronin but found them too heavy and awkward. The Letus Helix design is, IMHO, much better. It’s twice the price of the Ronin-M but worth it. I don’t want to be a specialist gimbal operator but I do want one that fits in my camera bag and can be set up with minimal hassle, as another option on a documentary shoot. The Helix Jr. fits this brief perfectly and their customer support is amazing. I had several Skype video calls with the actual guy who wrote its iOS app, who helped get me going and set up the gimbal to counter the specific conditions of increased up-down vibrations on our camera bike. See this short clip of our test to see how I achieved many of the shots in the film.

On the whole, the FS5 performed great and I really enjoyed using it. The modular design comes into its own on a gimbal and when shooting handheld – no rig needed here. I shot with S-Log 2 for the outdoor sequences and Cinegamma 4 (the same as the FS7’s Hypergammas) for the indoor shoots. We then graded everything in post. I used some custom settings from the FS5 user group on Facebook when using the Cinegamma curve, and I left the S-Log settings at the factory defaults. It’s a camera that you need to fully understand technically to get the most out of. It pays to understand and play with the different picture profiles and be confident to change them mid-shoot depending on the particular requirements of the scene in question – I definitely have more to learn. If you don’t want to shoot S-Log and have to grade your footage, the FS5 does make a lovely picture when shooting with the Cinegammas that can be used ‘as is’. The camera produces an image with a very natural looking highlight roll-off.

There were originally several shortcomings with the camera, one of which has been fixed by Sony in a firmware update (macroblocking) so the most significant issue I can report was some horrible purple fringing when shooting S-Log 2 in super slow motion (200 fps) on the sections of the image where there was very high contrast. You can see it on the picture below. Sony told me it was a limitation of the camera; apparently it happens on the FS7 as well.

After getting to grips with the camera for a scripted, constructed video I tried it out in a less controlled environment shooting handheld – a classic run-and-gun shoot at a refugee camp on the Greek/Macedonian border, for VICE news. The FS5 was amazing. The size means one can shoot stable footage without the need for a rig and without getting too tired. For most of this shoot I pretty much exclusively stayed on my Canon EF 24-70mm f/4 IS II USM (2.8 when used with a Metabones Speedbooster) for the handheld stuff and I used the clear image zoom a LOT. The only thing I added was my own mic mount (placed further back than the Sony one) and a LCD sun hood. The film below is a real world example of shooting handheld on the FS5 (sometimes under pressure) and handing footage straight over to the client with no expectation of grading. For this setup I tried to expose white at 90% using the zebras set at 95% (they kick in 5% before the threshold) Settings used: Cine 4, Black Gamma: LOW, -7, Color Mode: Pro Sat: +3 Color Depth: R+1, G-1, M+1 Detail: -7. Thanks to Olof Ekbergh for these settings.

Finally, the FS5’s slow motion is really good and will be familiar to FS700 users. It has an end trigger which means you can bank the previous eight seconds of slow motion at any time as it is constantly storing the previous eight seconds in the camera’s memory. This saves a huge amount of card space and at 200fps you get a clip over a minute long; plenty to work with. I don’t really need the ability to roll continuously in slow motion; I can fill up huge amounts of media doing this. It is great to be out shooting specifically for slow-mo and just hit a button when something interesting happens and it gets recorded. The only problem is that it writes to the SD card from the camera’s buffer, which does take around 40 seconds. You can see the FS5 at 200fps in the below video, also from the Idomeni refugee camp in Greece – this was my attempt at a bit of ‘Dan Chung-style’ cinematic journalism.

I think the FS5 and Helix Jr really are a match made in heaven for HD documentary shooters. If you’ve not shot with S-Log before it’s a bit of a learning curve and I certainly made some mistakes at first. But the XAVC-L codec is robust and I was thankfully able to cover my early errors in the grade. The best video I’ve watched for getting one’s head around the FS5 and its S-Log capabilities is Alister Chapman’s talk at Vocas. It’s a must-watch for anyone thinking of getting an FS5.

Sony seems to be on the right path ergonomically and hopefully things can get even better. I’m looking forward to trying out the new Auto Variable ND which has just landed with the latest firmware update and perhaps trying out the RAW shooting capability when it’s available. Onwards and upwards!