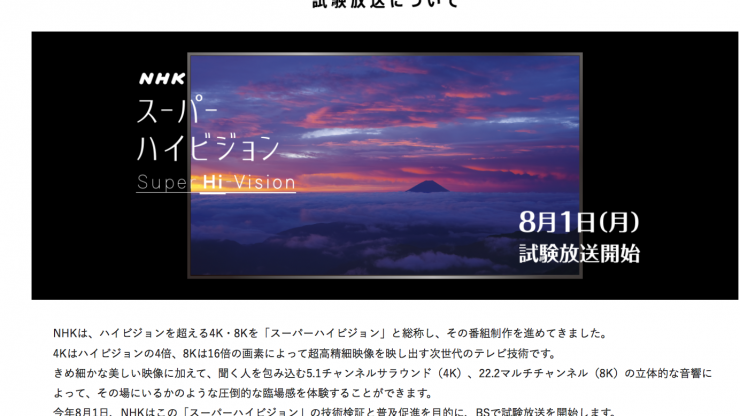 Japanese public broadcaster NHK today started 4K and 8K ultra high-definition test broadcasting on its BS satellite channels. This is despite having no plans to start official 4K and 8K broadcasts into homes until 2018. The broadcasts are being conducted to further test the technology and promote it ahead of the 2020 Tokyo Olympic and Paralympic games.

This is the first time in the world that 8K broadcasting, which offers 16 times higher resolution than HD, has taken place. Unfortunately no one can watch the test 4K and 8K broadcasting with conventional television sets or tuners, instead NHK has had to place 8K televisions at its broadcasting centres nationwide for visitors to experience the increased resolution. 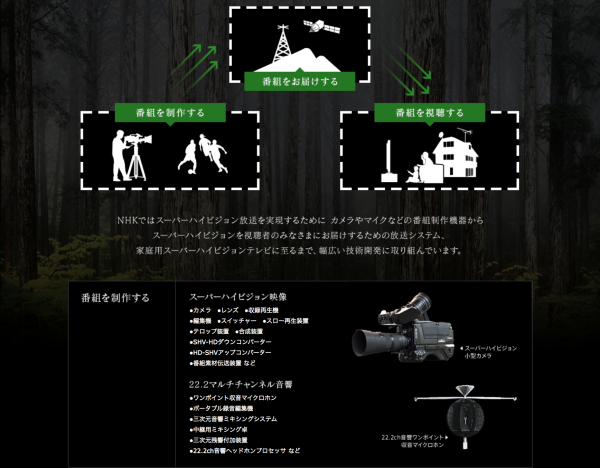 Katsuto Momii, President of NHK said, “This will be the first step for viewers to be able to enjoy ultra-high quality broadcasts at the Tokyo 2020 Olympic and Paralympic Games. This summer’s Rio de Janeiro Olympic Games will see 8K live-broadcasts, and preparations are moving forward for all of the NHK stations around Japan to have 8K receivers in place so that everyone can experience watching it.” NHK will hold 8K (Super Hi-Vision) Public Viewings in six venues in Japan, as well as on the ground in Rio de Janeiro in cooperation with the Brazilian Broadcaster, TV Globo. In Rio, 8K experimental terrestrial transmission will be conducted. Opening and Closing Ceremonies and five events (Judo, Swimming, Athletics, Basketball and Men’s Football final) in 8K resolution will be broadcast, and produced jointly with the Olympic Broadcasting Services (OBS).

NHK are clearly expecting consumer demand for the ultra realistic 8K images from major sporting events. Although there is plenty of debate online over whether the increased resolution will actually improve the experience for the viewing public, nobody has actually seen what a broadcast will look like until today. In Japan at least the public will now be able to see if its worth all the fuss.