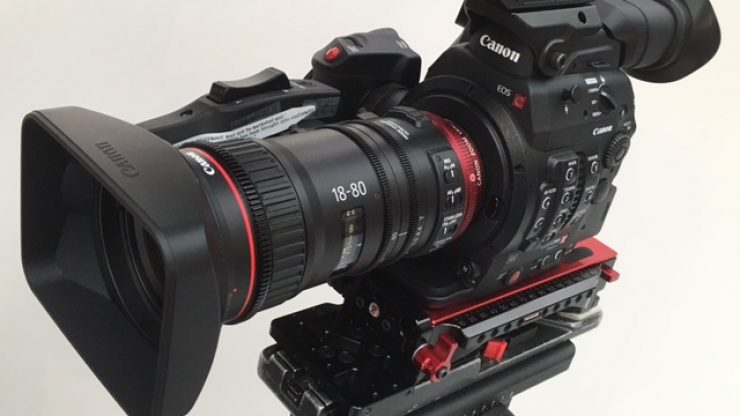 Canon have just released new firmware that unlocks a lot of new features on the C300 mkII. The release, which was announced at NAB earlier in the year, brings the much anticipated Canon Log3 to the camera. There is an excellent write-up of how it works on the Abelcine website. In addition the new firmware also offers a reduction in noise levels of the existing Canon Log2.

A major fix is the ability to magnify the image in the viewfinder while recording – a serious omission in the original camera firmware and something that practically every competing 4K cinema camera could do.

Users of the EF mount version of the CN7x17 KAS cine servo zoom gain Dual Pixel CMOS AF with the firmware. This uses the servo motor on the lens grip to control the focussing (there are no internal motors in the lens). I haven’t yet seen how fast and accurate this. The same AF system is also implemented for the as yet unreleased CN-E18-80mm T4.4 which we looked at recently.

Another useful new feature is the ability to control the zoom of compatible Canon servo zoom lenses by using the jog controller on the camera handgrip.

Push auto iris and fully automatic aperture have also been added. There firmware is also supposed to alleviate the ‘black sun’ issue that some users have encountered.

These improvements will certainly be welcomed by users of the camera. Combined with the recent price drop they make the C300 mkII a much more attractive proposition than before. Whether this is enough to win over Sony or original C300 users in numbers remains to be seen.

Firmware Version 1.0.4.1.00 incorporates the following update:
1. Adds Canon Log 3.*1
2. Reduces Canon Log 2 noise in dark areas.
3. Enables magnification to be used even during recording.*2
4. The following features are enabled when these lenses are attached: CN7x17 KAS S/E1*3, CN-E18-80mm T4.4 L IS KAS S or CN20x50 IAS H/E1*3.
– Enables autofocus using the Dual Pixel CMOS AF function. (Not applicable to the CN20x50 IAS H/E1 lens)
– Enables the joystick on the camera’s grip unit to be set to operate the zoom.
– Enables control of iris to be set to manual operation, and control of focus, zoom and iris using the separately-sold Remote Controller RC-V100.
– Enables automatic aperture and push auto iris functions.
– Enables retrieval of metadata, such as the model name and the focal distance of the lens attached, and display of metadata on the camera,
5. Enables Dual Pixel Function when these lenses are attached: CN7x17 KAS S/E1 lens, CN-E18-80mm T4.4 L IS KAS S lens or any of the EF cinema prime lenses.
6. Adds peripheral illumination/chromatic aberration correction for the following lenses:
– COMPACT-SERVO lenses: CN-E18-80mm T4.4 L IS KAS S
– CINE-SERVO lenses: CN20x50 IAS H/E1
– EF lenses: EF 35mm f/1.4L II USM, EF 50mm f/1.8 STM and EF-S 18-135mm f/3.5-5.6 IS USM.
7. Enhances menu operations so that settings related to resolution/color sampling, etc. are retained to the extent possible when changing recording settings such as the frame rate.
8. Supports ACESproxy (ACES 1.0).
9. Alleviates the black-dot phenomenon that appears in the periphery of high-brightness light sources.

*1Gamma information will not be shown correctly in the metadata of clips filmed on the Canon Log3 Gamma setting included in Firmware Version 1.0.4.1.00 and above when using the bundled software application Canon XF Utility 3.0 or earlier. Therefore, we recommend our customers install Canon XF Utility 3.1. The installer for this application has already been released.
Canon XF Utility 3.1 for Windows
*2 “Face detection and tracking” and live view display using Browser Remote do not work when magnification during recording is On.
*3 The lens firmware also needs to be updated.