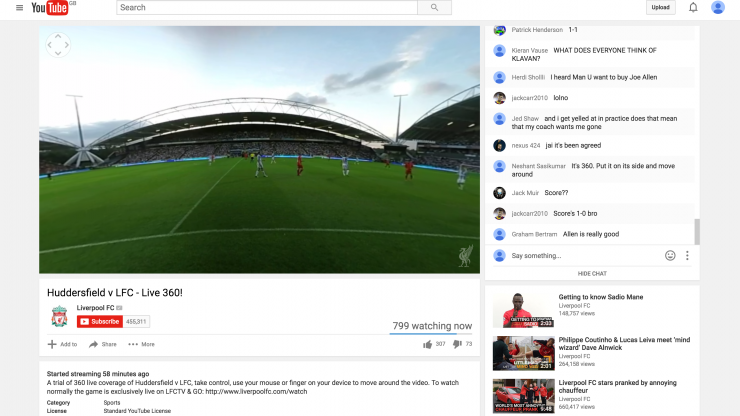 360° video might be the next big thing, or maybe the next big flash-in-the-pan, but Liverpool FC in the UK are giving the technology a thorough try out.

They’re currently streaming a friendly (soccer) match against Huddersfield on YouTube – which you can only watch by following this link to YouTube as embedding has been disabled.

There’s a lot more crowd than you normally see in 2D coverage, and camera spotters (this is Newsshooter after all) have a ringside seat next to a very busy sideline camera op.

There are some blurry lines, possibly where the picture has been stitched together, but overall the picture is very watchable. A small problem with one fixed camera angle in the middle of the pitch: neither goal line is particularly clear due to the extreme distortion of the wideangle lens. Perhaps an issue that could be solved with multiple camera angles and some way of switching between them. But it’s an interesting trial nonetheless and indicative of how far the technology has come in a really short period of time.