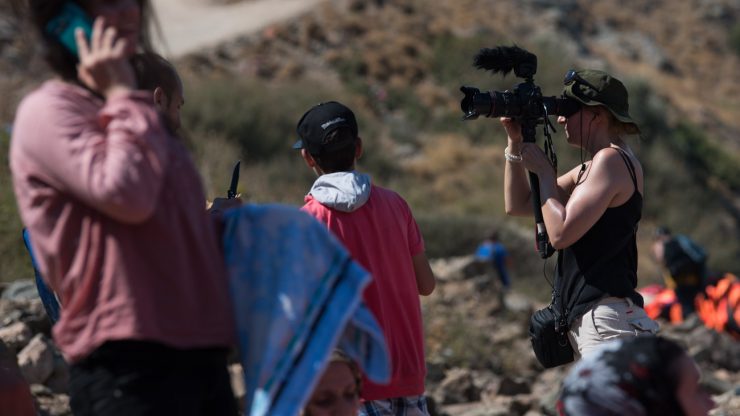 Sharrn Ward’s films have been seen widely in the UK, broadcast on the BBC, Channel 4 and ITV. Newsshooter caught up with her via email to ask her a few questions for our first In the Frame feature, an occasional series of interviews with factual shooters who are out on location producing the news reports and docs we watch every day. So without any further ado…

What’s your background – how did you get into filmmaking and what’s the appeal of factual?
I actually started working in the film industry – freelancing in New Zealand (where I’m from) straight out of University. I’ve always had a creative background making video art and experimental films and then worked in the film industry, to begin with in the art department as an Art Director, props buyer, stand by props. It was an exciting time in the New Zealand film industry – which has always been highly creative – there is something about Kiwi ingenuity and a “can do” attitude which makes people just go for it. If you have a vision and want to get something made you somehow find a way. I worked on everything from high end television commercials, feature films, TV dramas to creative short films and started directing and producing pop promos and TVCs. I then “worked my way down to TV” as we joke in the film industry and started directing and producing TV shows – when “yoof” TV of the late 90s took off. I’ve always been interested in social issues from a very early age and so making documentaries was a natural progression for me. I’ve always believed that truth is stranger than fiction and the appeal of factual is exactly that – why write fictional scripts when you can film real people in real life situations? You don’t need to make it up! Why write about a character going through a heartbreaking situation when you can find one who is actually living it and by doing so helping to shine a light on the issues they face, engendering empathy and understanding and raising awareness of an unreported issue.

What are the last few projects you’ve worked on?
For the last few years I’ve worked almost exclusively on the Syrian refugee crisis – mainly working in the Middle East. I first made an investigative short film exposing the sexual exploitation of Syrian refugee women and girls in Zaatari refugee camp in Jordan for Channel 4 News in the UK. It was a challenging film to make – as we were filming under the radar of the authorities there and of course the issue of “pleasure marriages” (in essence the exploitation of girls for sex) are a difficult issue for Syrian women to talk about for fear of being shamed and ostracised. It was a real testament to the women who talked to me that the film had a huge impact and we were awarded an International Emmy for News as part of a series of films entitled “Syria’s Descent.”

Last year, I made a short documentary called “Syria: The Hidden War on Women” which lifted the lid on the startling rise of domestic abuse, survival sex and child marriage among Syrian refugee women living in Jordan and Lebanon. I’m always humbled by the resilience of Syrian women in particular – simply put they have been through hell.

More recently I’ve been working on the big story of our time – the European refugee crisis. It is no surprise to me that after five years of the barbarity of Assad and ISIS that more and more Syrians are desperate to leave Syria and the stateless limbo of living in refugee camps in the Middle East. The mass exodus of refugees to Europe is perhaps one of the most important stories we should all be covering. I went to the island of Lesvos in Greece to document the humanitarian crisis on the frontlines there and it was heartbreaking to witness it firsthand. The resulting film called “Lesbos SOS” for Channel 4 News has had an incredible impact and has helped to show the reality on the ground of this so-called “migrant invasion.”

Like many of my friends and colleagues I was drawn to make films in the Middle East during the Arab Spring. I’ve also made films on the sexual terrorism of women protestors in Egypt and the aftermath of the civil war in Libya.

The large majority of my work focusses on women – especially violence against women – and I’m sad to say there are no shortage of stories and characters to film in that regard whether in the Middle East or globally.

Do you work to commission or do you go on spec?
I work entirely on commission these days although in the past I have gone on spec. Sometimes when you feel the story just has to be told or the story is moving so fast you know you there’s no time to pitch, I have gone out on spec. On some projects I’ve managed to recoup my costs, on others I haven’t.

How long do you normally get to shoot and turn around projects – are you editing in the field and transmitting a cut back?
I don’t do breaking news stories – I am much more interested in telling the human story behind the headlines. I wait to see how the story unfolds and it means I can be much more in-depth. I like to spend time getting to know the real story – quite often I find when journalists parachute into a crisis unless they know the issue very well there are so many nuances that are missed. So I don’t edit in the field, I concentrate on shooting the narrative arc and finding compelling characters – all the magic of the edit happens back in London. I shoot on average two to three weeks and edit one to two weeks depending on budget.

What sort of kit do you work with?
I work exclusively on the 5D mkII which I’ve hacked with Magic Lantern. It means I can monitor audio – which is absolutely crucial, and the audio is automatically synced so I don’t have to worry about that.

What informs your choices about what to take with you?
I chose the 5D because I love the warm tones, the shallow depth of field and the bokeh effects I can create. It’s also the smallest & lightest DSLR that I can use on-the-fly. I often take stills when I shoot for production purposes and also to file to Getty. I’m getting back into photojournalism too which is a previous love of mine. The 5D isn’t the most ideal camera to shoot run and gun documentaries and yes it’s not the greatest in low light and there is a bit of fiddling about with focus – but I’m so used to it I’ve kind of got it down pat. I’ve recently got a Beachtek audio adaptor too so I can use 2 XLR inputs and record audio with a shotgun mic and a radio mic at the same time – which was a huge limitation before.

I specifically chose the 5D also because it’s so small and I rig it very minimally – often with just a monopod so there is less intrusion between me and the characters I film. Because I am filming from behind the camera my characters look straight down the lense at the viewer, which I find creates more of a relationship between the viewer and the character. I want to create that sense of intimacy and let the character confront the audience in their own words.

I have to admit however, that lately I’ve been looking at the C300 – I need something more flexible in low light and with better audio solutions – so watch this space!

Do you normally work with a crew?
I work with an extremely minimal crew – I shoot, produce and direct – and I usually work with a fixer/translator. I keep crew minimal because it means I can film under the radar in stealth mode and draw less attention to what I am doing.

What are the challenges of working in potentially unpredictable or hostile environments?
There are so many challenges to working in a hostile environment. The most important advice I have to stay safe is do your homework – do your research on the area, the politics and the tribal and cultural affiliations of where you are going. Most importantly get a trusted fixer/local journalist who is recommended by colleagues not some cowboy who puts him or herself up for recommendation. They can literally hold your life in their hands. I cannot overemphasise the importance of having hostile environment training – like the one offered through the Rory Peck Trust who offer bursaries for freelancers. And do a risk assessment for each shoot – it makes you think through a list of “what if” scenarios so you’re prepared for most things that can do wrong. What’s that saying – “if you fail to plan, you plan to fail.” As a woman I unfortunately have to take more precautions – even if the weather is hot if I’m in a conservative country, I cover up and dress conservatively – even if I completely disagree with the concept on principle, I do it to keep safe. I always wear wedding rings when I travel to ward off unwanted advances. Oh – and trust your instincts. If something doesn’t feel right – it probably isn’t.

How do you build a rapport with your subjects? Do you try and develop a relationship before starting to record?
I always sit down to chat with the people I hope to film, firstly because I want to find out more about their story but also of course so I can build rapport. It’s important to get to know the people I film and quite often the camera doesn’t come out on the first meeting, it can take a couple of visits before I feel comfortable approaching the issue of filming – quite often because the issues I’m filming are deeply personal and quite often taboo subjects such as rape, sexual exploitation and domestic violence. Informed consent is also very important – to make sure that the people I film are aware of the consequences of talking on camera both within their own community and in the wider sphere.

Any advice for filmmakers who are starting out?
Find a passion, a subject or a person you care about – a compelling character and just film them. Don’t be overly ambitious and try and make that international award winning feature length doc right off the bat – make a shorter film and keep it simple. And if you can learn to edit yourself or make sure you sit in on lots of edits with a gifted editor – that is incredibly helpful to see what shots you need, what coverage you need and how to film sequences in order for it to be put together into a narrative structure.