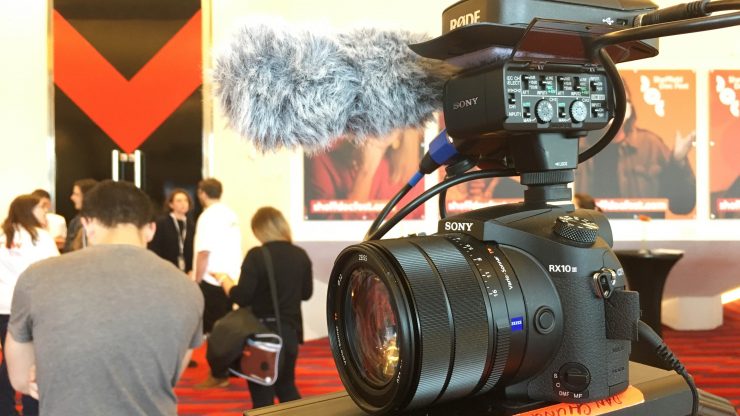 In recent times Sony have continued to launch new prosumer cameras at an incredible rate. The RX10 III is their latest superzoom model featuring a 1.0 inch CMOS sensor and 4K video recording. It has an astounding 8.8-220mm (24-600mm equivalent) Zeiss-branded zoom lens and can shoot slow motion up to 1000 frames per second (at reduced resolution).

I really like the previous RX10 II model and carry one much of the time as an ‘emergency cam’. It’s a nice little package that has just enough features to shoot a basic news story. The best things about it are the electronic viewfinder and the ability to add the XLR-K2M audio pack so you can use all your XLR microphones. For video journalism on a limited budget it is my go-to camera.

The RX10 II is barely a year old and will continue to be sold alongside its newer sibling. So just how good is the mark III version? And could it replace my mark II in my camera bag?

The RX10 III lens has an amazing range. It can be extended even further with minimal quality loss using Sony’s image zoom function (or further still with digital zoom but with an obvious loss in quality). The optical quality is generally very good and still acceptable at the long end. The trade-off is that it doesn’t have a constant maximum aperture (the RX10 II has a constant f2.8 maximum aperture). Instead, it goes from f2.4 to f4 as you zoom in. This varying aperture can make exposing a bit trickier when shooting run-and-gun. It also makes isolating your subject in short telephoto shots harder than it would be on the RX10 II with its faster f2.8 lens (don’t expect either camera to offer the same super-shallow depth of focus that a Super35 or full-frame camera does).

It does, however, have a very impressive Steadyshot image stabilisation system that really helps get stable shots when shooting handheld. I tested it out shooting some candid shots of DP Rodney Charters while he was waiting for me at a London Underground station and was able to film him for a few minutes completely unnoticed.

Unlike the RX10 II there is no built-in ND filter to help keep your shutter speeds down and your apertures wide. Thankfully Sony have put a 72mm front filter thread on the lens so it was easy to add my Genus variable ND filter. My only concern with this is how durable the thread will prove with constant use.

Control of the lens is much better on this camera than on previous Sonys. The RX10 III has three rings so you can do independent focus, zoom and iris control. The aperture ring can be de-clicked for video use by sliding a switch on the barrel. In a nice touch, you can choose which of the two front rings is used for focus and zoom. There is also a new custom button on the side of the lens that can be assigned to start and stop autofocus or recording.

The OLED electronic viewfinder is decent although pretty much the same as the RX10 II. It has 2,359,296 dots, which is the same as the a7R II, but does not have the better T* optics that make that camera’s viewfinder easier to see with. There is a reasonable diopter adjustment that should accommodate most users.

Like the other RX cameras it would benefit from a deeper eyecup to cut out extraneous light. The tilt LCD screen on the rear of the camera is also good – although it would be nice if it could flip out the way the Panasonic GH4 one does.

The camera uses the same XAVC-S codec as those other Sonys and it records UHD at up to 30 fps. Maximum bitrate is 100 Mbps. Slow motion is a nice bonus especially if you keep the frame rates down at around the 100 fps mark. Recording is to SDXC cards but you need the higher U3 spec for UHD recording.

The 1.0 inch BSI CMOS sensor is capable of some very nice images. This will not be news to anyone who has shot with the RX10 II or RX100 IV. Noise is excellent for a smaller sensor and the images can look very pretty once graded. Of course, it doesn’t have the dynamic range of a full-blown cinema camera. I personally shoot using Sony’s Cine gamma with these smaller cameras rather than S-Log 2 because of the type of quick and dirty work it is used for – fast turn around with minimal grading. A quick pass with Film Convert is the most that I am ever likely to do with footage from this camera.

I used the RX10 III to shoot several interviews at the recent ARRI event at Sheffield Doc Fest. They were shot in Cine gamma and then graded lightly using FilmConvert. By pulling the camera back and putting some distance between the subject and background I was able to get some decent separation. I thought the results were pretty convincing (although of course it would have looked better on an Alexa).

The body design is similar to the original RX10 and RX10 II, but bigger in pretty much every direction. It’s heavier, too, at around 1kg. In fact, it feels similar to a DSLR and lens. When you zoom in the lens it extends out a very long way – more than doubling in length. Even powered down it feels bigger than an a6300 with 18-105mm lens attached. The one benefit of the larger body is that the grip is bigger too and much more grippable than the RX10 II. There is a large red dedicated video trigger button on the rear of the camera that is easy to reach.

Although the construction is nice and solid I found the size a real turn-off. I felt like carrying the RX10 III with me took a conscious effort, much like my old Canon 5D. Every time I put the RX10 III in my bag I kept thinking ‘Why not take an a7R II or a6300 and 18-105mm instead?’. For my personal style of shooting I think I would sacrifice the extended zoom range for the larger sensor. If you spend a lot of time shooting subjects a long way from the camera then I can see how this camera would make perfect sense – wildlife and warzones being obvious examples.

For me, the most annoying thing about the RX10 III was the electronic manual focus. Like every other superzoom camera I’ve tried, the manual focus is not mechanical, but instead relies on the autofocus motors to drive the lens when you turn the focus ring. All of these systems have a degree of lag and don’t feel as positive as a real manual lens. That said, you can usually work with these systems by second guessing how they will respond. Not so with the RX10 III.

I found it to be reasonably straightforward from wide to middle of the range (where it performs much like the RX10 II), but when I zoomed right in things changed. The focus throw is not constant and it takes a lot more twisting of the barrel at the long end. I assume this is meant to make it easier to achieve precise focus, but in practice I found that it meant I just couldn’t nail focus most of the time.

The autofocus system on the RX10 III isn’t all that wonderful either. At wider focal lengths it wasn’t too bad, but at the long end I found the AF hunted a lot – I just wouldn’t rely on it for anything critical. Even in simple interview situations I found it sometimes started to hunt. Because it uses contrast detection it sometimes fails to focus when there are no distinct edges. Check out the video below to see what I mean.

As with almost all recent Sony prosumer cameras, the battery is the annoyingly small NP50 type. If you get this camera then you had better get a few spares to get you through a long shooting day.

On the sound front there is a headphone jack for audio monitoring and a 3.5mm minijack mic input. As I mentioned at the start, perhaps the best thing about the RX10 cameras is the XLR-K2M audio module that attaches directly to the camera’s MI show and allows you to use XLR mics and supply phantom power. It derives power from the camera and needs no separate battery.

To keep things light and small I often Velcro a Rodelink wireless mic directly to the top of the XLR-K2M. The audio quality of the XLR-K2M is pretty good although I do occasionally get cross channel audio bleed. Even so, this is the most convenient audio solution I have for small cameras and it makes the RX10 III a very usable video journalism tool.

The RX10 III is currently in a class of its own. No other superzoom has such a long lens range coupled with a 1.0 inch sensor. If your work, or your pastimes, demand the longest reach in a small form factor then the RX10 III is certainly worth considering. Personally I prefer to have a faster maximum aperture and built-in ND filter, instead of longer lens reach, so will keep the RX10 II for now.