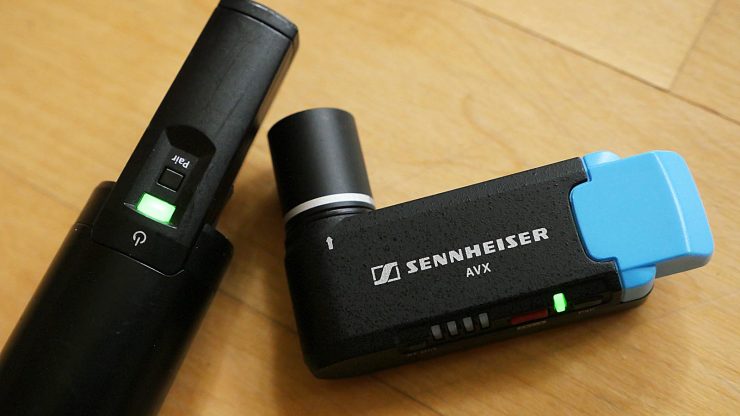 Sennheiser sent me an AVX handheld mic to test last year, shortly after its introduction at NAB. Unlike many pieces of gear, I’ve grown to love this microphone – for specific uses – after initially hating it. Usually it’s the other way around!

The AVX system is a digital wireless microphone setup in the 1.9ghz frequency range, which solves the problem (at least here in the US) of wireless mics being legislated out of existence as frequency blocks get sold off to the highest bidders. It doesn’t work on a fixed frequency but can hop around as needed.

The AVX is unlike any wireless mic I’ve used before. There’s no setup involved, other than adjusting the output level of the XLR receiver. Turn the mic and the receiver on, and after a few seconds, they’re paired together and ready to go. The AVX-835 handheld mic and the tiny little EKP receiver talk back and forth, negotiating clear radio connections with no user input.

I initially tried to use this as a reporter stick mic, which, I quickly found out, it is not.

I normally use an ElectroVoice RE50B handheld microphone, with a plug-in transmitter, for my day-to-day news work. The RE50B is pretty much bulletproof, with a high resistance to wind and handling noise, and an omni pickup pattern that gets everything around it. It’s the microphone you see most often here in the USA bristling up at the podium during a press conference or in a reporter’s hand during a live shot.

Wind and handling noise resistant? Not so this Sennheiser. The AVX-835 is sensitive to wind noise and to handling noise, as I found out the first time I tried it on a podium during a press conference. It’s also somewhat directional, and I lost the voices off to the side. I couldn’t figure out why I’d want this thing.

Since I couldn’t use it for my normal duties, I had decided not to review it. Plus the proprietary rechargeable batteries scared the crap out of me (more on this later.)

But after a few more tries over a period of months, I eventually found out this is a really useful – if somewhat specialized – vocal mic.

First, the AVX radios are virtually immune to interference. I’ve used the AVX in Times Square and on Broadway in New York City, two of the most hostile environments for wireless mics you can imagine. I’ve used it at a robotics competition, which had an incredible amount of electrical noise and RF flying around. I used it as DJI introduced their new Phantom, in a room full of electronics and RF. Not once did I get a single hit on the audio. Clean, clear sound where my old Sennheiser G3 wireless mics would have been hurting.

Second, the audio quality is quite nice, despite the lack of manual controls. The AVX-835 mic has “automatic sensitivity adjustment.” Uh-oh, I thought. Automatic gain control. But Sennheiser has managed to make “auto dynamic range adjustment” work in a professional way. It seems to work like a good limiter on some higher-end audio gear. You don’t really hear the audio pumping, and it’s resistant to clipping. It has a lot of headroom and it will handle really loud situations fairly well. I don’t think I’d use it for recording chamber music, but for interview situations in noisy environments, it’s great.

It really shines in loud situations like on a trade show floor or an industrial setting. The 835 mic is a little bit directional, which makes it great to get vocals in noisy gyms or other places with a lot of background noise, as long as you have it close to your subject’s mouth.  You can hear examples of this mic in my coverage of the DJI Phantom 4 introduction; talking to Sony about a new ENG camera; and talking to Atomos about the Shogun Studio, where you can see how the audio drops off-axis, (which can be either a good or a bad thing, depending on the situation.)

Now about those batteries. I was really afraid of those batteries. If your battery dies, you can’t just pop in new AA’s. (But you can buy extra rechargeable batteries; $50 each.) The AVX835 handheld mic uses a long skinny rechargeable battery that it says lasts for 18 hours, while the small receiver is supposed to last for four hours. (The handheld has a battery meter but the receiver doesn’t have a display.)  My fears have turned out to be groundless. In numerous uses, I’ve never gotten close to exhausting the batteries. They both recharge very quickly, using a standard cellphone micro usb charging cable. Recharge times for partially exhausted batteries have typically been in the 15-20 minute range. And if they died I could plug in a cellphone backup battery with a USB cable to power them.

The AVX EKP XLR receiver is a clever little bit of kit. It’s a tiny little thing, not a whole lot bigger than the swivelling XLR plug it incorporates. (It also comes with a 1/8” to XLR adapter for you DSLR users.) The on/off switching can be accomplished with a too-small squidgy switch on the mic or by using the camera’s 48v phantom power to automatically turn the power on. Clever bit of battery-saving tech. You don’t need an XLR cable – it plugs directly into all the cameras I’ve tried thanks to the tiny size and the swivelling XLR plug that lets you angle it in any direction. You can adjust the output level in four steps.

The handheld mic’s finish looks shiny and feels delicate, but has turned out to be quite rugged. After numerous drops and months of riding around in my gear bag, it still looks mostly new. The battery on the handheld mic is held in with pinch latches and can lose contact or fall off completely if dropped, but hasn’t broken and continues to work fine.

A drawback to the AVX mics (they make a companion lavalier mic as well as this handheld) is that one transmitter can pair only with one receiver at a time. With my G3 wireless, I often feed several cameras with a single mic going to multiple receivers. You can’t do that with the AVX receivers – it’s strictly one to one.

I’m not fond of the power switches – you need a fingernail and the right angle of attack to get it to turn on, but they work. Normally, once you turn on both mic and receiver, the power light will turn green within seconds, showing that the mics have paired up. Sometimes you’ll need to hit the “pair” button to get them talking to each other. Only once, at the nightmare RF environment of the robotics competition, did I have to try multiple times to get them to pair – but once they paired, the signal was clean with no hits or dropouts.

The 1.9Ghz band where these mics operate is an unlicensed block from 1920-1930 Mhz where cordless phones also live.  In theory, you could have up to eight AVX units working in the same area. Once all eight slots fill up, they won’t get a frequency to be able to pair up.  There’s a big catch for TV shooters, though:  FreeSpeak intercoms from Clear-Com that are becoming popular for television productions at big events also operate in this frequency.  I spoke to a frequency coordinator from Bexel who said he hasn’t had to deal with AVX units at major events yet, but would have to limit the number of wireless mics in that frequency block, depending on the use of the other devices at the venue. As more devices populate the 1.9Ghz range, it may become more difficult to use them.

The AVX-835 Handheld Wireless microphone, with the EKP XLR receiver, sells for around $900 US. A kit with both the handheld mic and the SK Bodypack lavalier transmitter and mic is around $1,300. Spare rechargeable batteries, which are different on all three, are $50 each.

If your work involves a lot of interviews indoors in noisy situations, this mic should be on your shopping list. It will let you go wireless in situations where you normally would have to go wired. For folks who work televised events, I’d be cautious using this – but for general video journalist use in noisy situations, it’s pretty solid.

Got a good microphone? Nor its time to buy one of these karaoke singing machines!