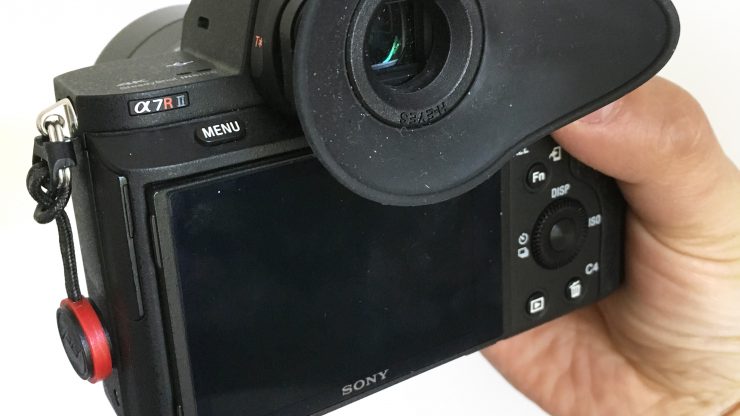 Having an electronic viewfinder (EVF) on your Sony a7S II or a7R II is great, but the stock Sony eyecup sometimes makes it hard to see because it does a very poor job of blocking out extraneous light. The obvious solution is to use a third party rubber eyecup. Like many users I had been trying to adapt eyecups designed to work with the original a7S. The problem is that the newer camera has better T* optics in the EVF, making it bigger and longer than before. Most eyecups designed for the original a7S fit physically, but I find they don’t allow me to see the edges of the frame properly.

Hoodman are perhaps the best known eyecup maker around. Late last year they announced they were making an eyecup that would work on both the original and second generation a7 cameras. Their Hoodeye costs a very reasonable $19.99 US and has a nice large rubber eyecup. They sell two different versions, one for regular users, and another even larger one for glasses wearers. They are now available to buy and I interviewed the company about them at the NAB show in Las Vegas last month.

Newsshooter at NAB 2016: Hoodman A7SII and A7RII eyecup from Dan Chung on Vimeo.

After the interview I picked one up and have since been using it on my a7R II. I find that it fits my eye socket really well and does a really good job of blocking out the light. The soft rubber is very comfortable, yet still rigid enough to hold its shape. Most importantly, I was pleased to discover that I can see the whole finder image with no problem at all – something that other eyecups I’ve tried fail at.

The eyecup snaps firmly into place when you put it onto the camera. So far it hasn’t come loose or accidentally fallen off. I don’t know how durable it will be in the long run, but you can of course buy a spare to carry around if you are really worried.

The design allows easy access to the diopter adjustment too if you need it. If you don’t, then there is the slight risk that you can knock it accidentally, but this is easily rectified with a small patch of gaffer tape.

I also find that the eyecup does a much better job of creating an additional point of contact with the camera when handholding. I can push my face into the camera a lot better when using the Hoodeye – with the original Sony eyecup it’s a bit painful if I do the same for any length of time.

There is a cut-out on the eyepiece that allows Sony’s eye proximity sensor to work. Usually this sensor automatically switches the screen between the rear LCD and EVF when you look into the eyepiece. Personally, I don’t use this feature, as I find it annoying, but if you do then you can continue to use it as easily as you can with the original Sony eyecup.

I can’t guarantee that it will fit your eye as well as mine – everyone’s faces are different – but I find it very comfortable and for $19.99 buying one is a no brainer. I’ll be picking up another one for my a7S II when I get the chance.