You might not have heard of Yi Technologies before, but I suspect you’ll be hearing a lot more about them in the coming months. The Chinese company last week announced their new Yi 4K action cam, which they are firmly positioning as a GoPro Hero 4 beater. Initially details were scarce, but as the week has gone on more info has emerged. The result is a very promising set of features coupled with a rather familiar-looking design.

The lens is 177° f/2.8 wide angle which is similar to the GoPro’s. There is a 2.19 inch 640×360 touch screen on the rear of the camera that makes composing shots easier. The camera is run by an Ambarella A9SE75 CPU that is powerful, yet energy efficient. Battery life is claimed to be eight hours in standby and up to two hours of shooting on a single charge.

Their previous camera, the original HD version of the Yi, has become something of a cult hit. Originally only sold in China by phone giant Xiaomi, the Yi had an amazingly low price of around $80 US when imported by third parties.

The company is now officially going to sell both cameras in the US, with other global markets said to follow. The new 4K camera isn’t quite as affordable as the original, but for $249 US the specification very competitive.

Yi Technologies have no qualms in directly comparing their camera to the GoPro Hero 4. They have even published a handy table that points out the screen and battery life as key differentiators. 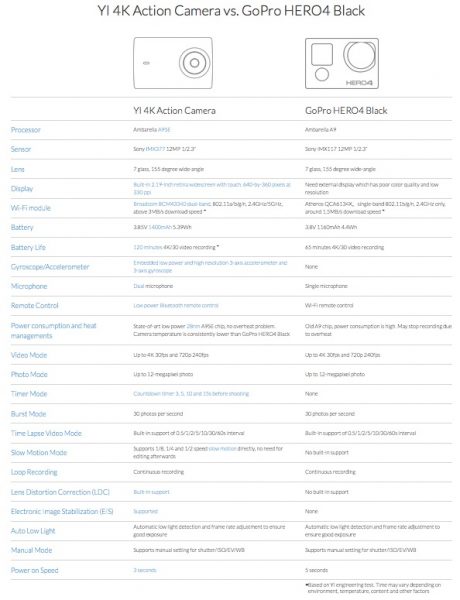 The processor allows for built-in three axis Electronic Image Stabilization. They have published the below video on Youtube to compare it directly with a GoPro. Although this sounds like a nice-to-have option, I’m personally not that keen on electronically stabilised footage, and much prefer physical stabilisation.

Also onboard is Microsoft Hyperlapse Pro technology although quite how this works isn’t clear yet.

No new action camera is complete these days without its own app. Yi have their own that runs on Android and iOS devices and allows users to edit and share video from the camera quickly.

You can control the camera via Bluetooth and don’t need to rely on Wifi for live view. 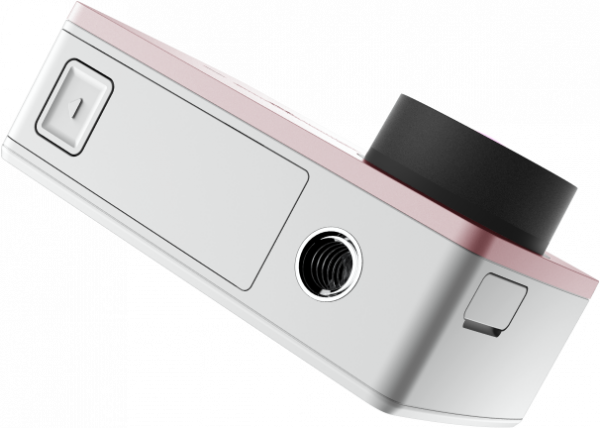 Despite all the high tech stuff, perhaps the most useful improvement over a GoPro for many pros will be the addition of a 1/4 20 tripod socket on the base of the Yi. No more messing around with fiddly adapters if you don’t want to – thank you.

On the downside there is no waterproof housing for the camera included for the $249 asking price. As with the original Yi it is an optional extra, along with a range of other accessories. The optional leather look case with lens protector does look nice though.

So what can’t the Yi do as well as a GoPro? For many pros GoPro’s Protune is essential. With it you can shoot Log and also control aspects of white balance, sharpness, exposure and ISO. The Yi doesn’t appear to have a similar mode, or a log gamma at the moment.

On pictures you can see a 1/2000th shutter speed displayed on the rear screen of the Yi, and the timelapse video clearly has slow shutter speed set, but there is no information as to whether this can be manually adjusted.

The other advantage GoPro has is the huge number of compatible accessories that work with their cameras. Gimbals, microphones, cages and filters are easy to find. If you want to do a specific task with a GoPro, the chances are that someone has made the widgets that you need to do it. Some, but not all of these gadgets will fit the 4K Yi.

The high end GoPros also have various control and triggering options through the electronic connectors on their rear which are becoming useful for VR applications. The Yi doesn’t appear to have the same level of communication.

That said VR is also on Yi Technology’s horizons. This week Sean Da, CEO and Co-Founder of YI Technology met Clay Bavor, Google VP of Virtual Reality and Hugo Barra, Xiaomi Global VP at the Google I/O developer conference. The company announced they are working on a VR camera using Google’s Jump platform. No further details were given but there may be a few raised eyebrows around the industry given that Barra is a former VP of Google’s Android division.

From what we’ve seen so far it looks like an incremental improvement, rather than a genuine attempt at innovation. On paper the Yi does a number of things better than a GoPro, but it could have done so much more if the designers had been a little braver. The GoPro is a proven tool that works well and has a huge user base. It is safe to assume that the next GoPro will have all the advances seen in the Yi, and perhaps a few more. For professional users who need Protune and don’t care about saving a few bucks there is probably little reason to go with the Yi. More budget minded shooters might be seriously tempted though – and of course Yi can always drop the price further when GoPro release their next model.

The 4K Yi comes in three colours – white, black and rose gold (otherwise known as shiny pink). When the 4K Yi went on pre-order in China earlier in the month it chalked up 5,000,000 RMB ($766,600 US) of orders in less than 24 hours. If the 4K Yi works as well as its makers expect, then they could really eat into GoPro’s market dominance – let battle commence.

If you are in the US you can pre-order the 4K Yi here.