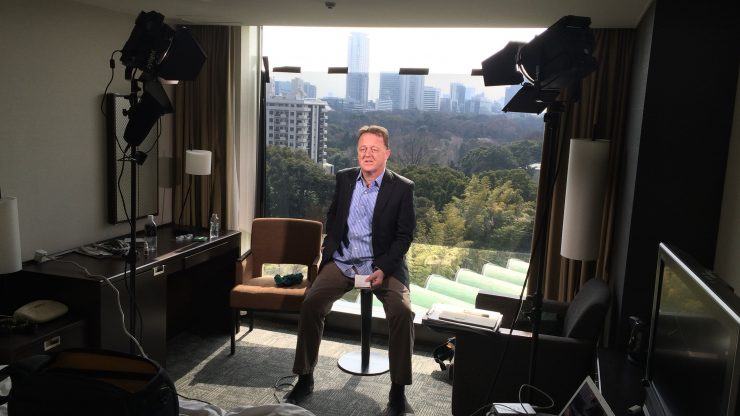 I recently got the chance to field test three fresnel LED lights from Lupo Lighting: the DayLed 1000, DayLed 650 3200K and the DayLed 650 Dual Colour. All three of these lights have been designed to offer a lightweight, compact, powerful solution, for either field or studio use. As I primarily operate solo I wanted to see how well they worked in an environment where you had to transport, set up and use the lights by yourself. 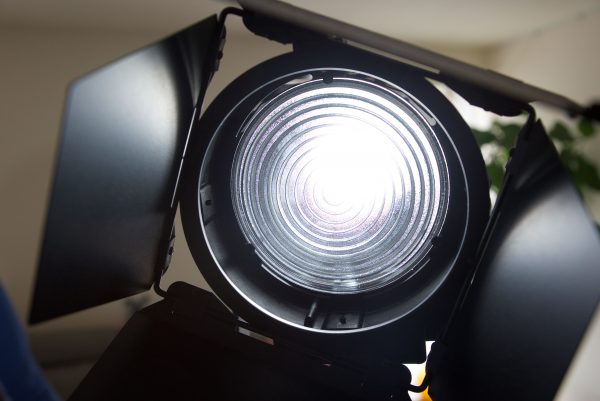 Their affordable price and ability to run off a camera battery in the field has made them a popular choice for TV stations around the world. While earlier versions of these lights did suffer from a green colour spike, the latest versions have been greatly improved to offer better colour rendition and performance. I used a Sekonic C-700 Spectromaster to test all three of the lights and you can see those results further down in the article.

First let’s take a look at the larger of the three fixtures, the DayLed 1000. The DayLed 1000 uses a 150mm fresnel lens that offers full flood and spot control and a output that Lupo claim is very close to that of a Arri L5-C 5600K fixture. The first thing that you notice about the DayLed 1000 is that it is extremely lightweight. Lupo have built the 1000 out of a carbon fibre reinforced polymer to keep the weight down to 3.5kg (7.7lb). What makes this figure even more impressive is that the ballast is built into the light, so your entire fixture including the power supply comes as one unit. To put this weight in perspective the Arri L5-C weighs in at 5.1kg (11.24lb). I found the DayLed 1000 to be well made and build quality doesn’t seem to have been sacrificed even though the unit is so light. 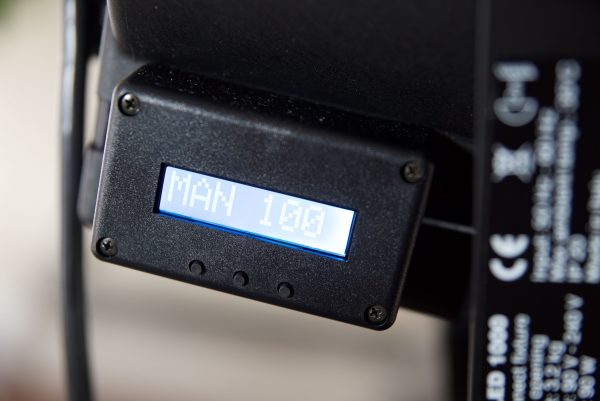 All the DayLed lights can be battery powered. The DayLed 1000 draws 90W, which allows you to run it off just about any camera battery at 100% power. What I especially like about this is you don’t need to carry around high power-draw camera batteries that you might not be allowed to take on board aircraft. All the Lupos have a broadcast industry standard four-pole XLR socket for battery connection from a standard 14.7V battery plus a mains power lead. The lights don’t come with a battery plate, which can be purchased separately.

The light is fully dimmable from zero to 100% and is pre-configured for DMX use. Barn doors are included with the fixture and they have built-in clips for attaching frosts or gels. Three models of the 1000 are available: 3200K, 5600K and variable colour. 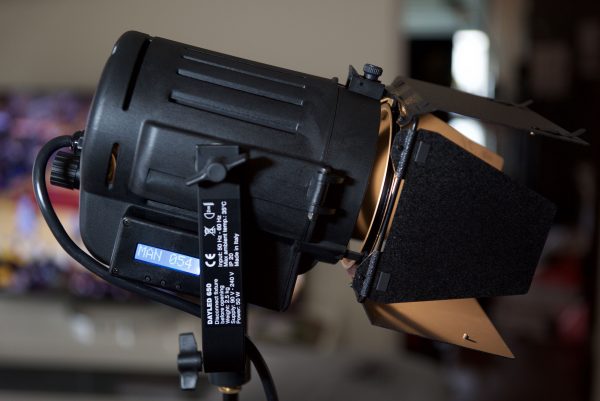 Colour performance and output
I tested all 3 lights with the a Sekonic C-700 at a distance of one meter in a fully controlled environment. Below are the results: 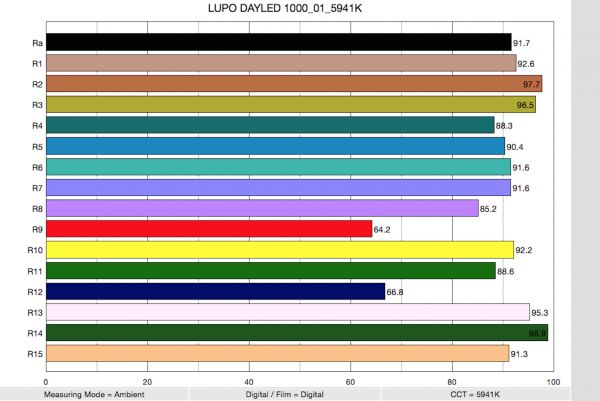 The DayLed 1000 5600k results were pretty good and the light scored well with a average CRI Ra (CRI Ra is only the average of R1-R8) of 91.7 and a extended CRI (R1-R15) of 88.7 . More importantly it scored very well in both R13 (the closest to caucasian skin tones) and R15 (the closest to Asian skin tones). The other figure to look at is R9 (red) which is also a key colour for helping replicate good skin tones. Unfortunately the light only managed to score a 64.2 in this category. Really good lights normally produce consistent numbers from R1 to R15. Still these results are quite impressive for a large LED source and it places the DayLed 1000 5600K among the best scoring lights in this category that I have tested. The DayLed 1000 5600K scores were only marginally behind those of the very good Zylight Z8.

As far as output goes the light measured 5800lx at a distance of one meter. Note: All the lights I test regardless of whether they have spot or flood capabilities are tested in their flood setting. 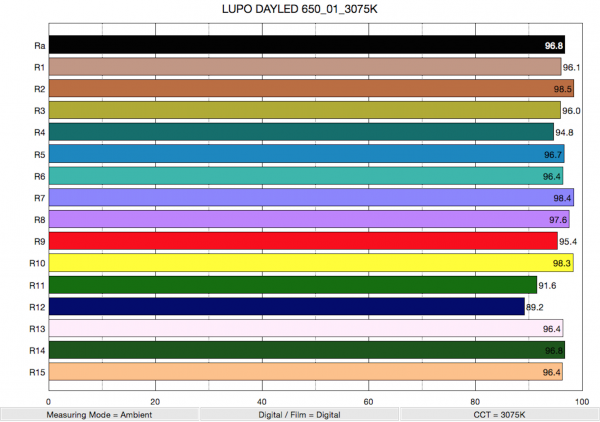 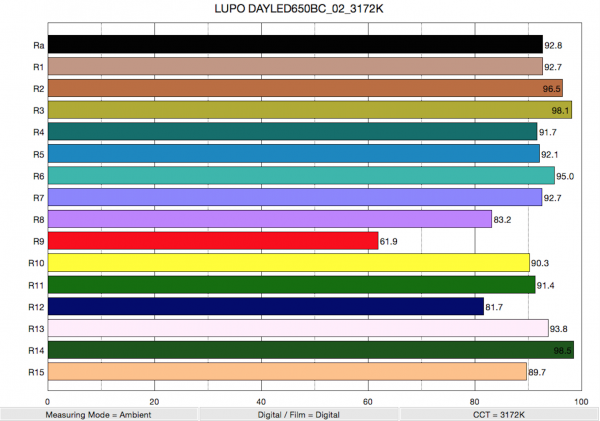 It is clear that you sacrifice a bit of colour accuracy to get the added benefit of having a dual colour fixture. While the light didn’t perform as well at 3200K as the designated 3200 650 fixture, the results were still good. It scored a average CRI Ra of 91.6 compared to the 96.8 of the 3200k only version. As far as skin tone reproduction goes it scored 94.5 for R13 and 90.3 for R15. Where this light did struggle was reproducing reds (R9) where it scored just 63.7. 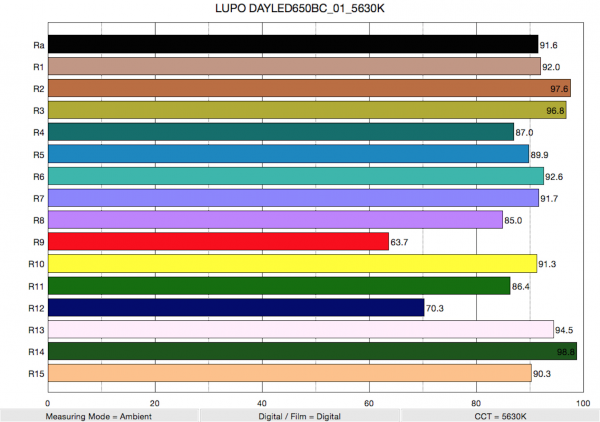 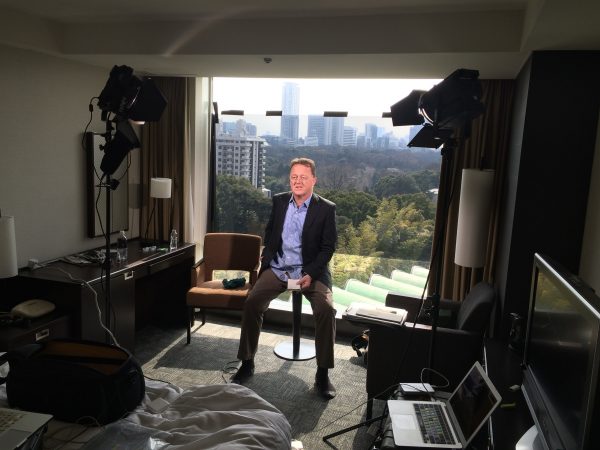 I used the lights on a few shoots to see how well they performed and I was particularly interested to test the DayLed 1000 as I have been looking for another large LED light with a fresnel design. I had the perfect opportunity to use it for some live TV broadcasts in a makeshift studio I set up in a hotel room in Tokyo. I placed ND on the window to cut the light and to help me match the lighting on the correspondent. As I only had 1 DayLed 1000, I used it in conjunction with a Zylight Z8 to provide even lighting from both sides. 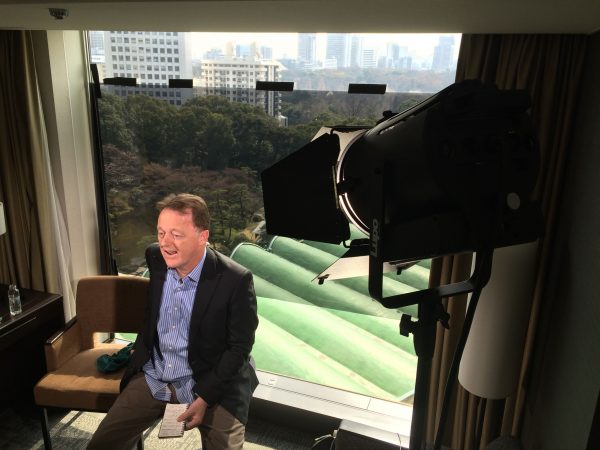 I knew from testing both lights with the Sekonic C-700 that they had similar photometrics so I could use them together without having to worry about matching two different colour sources. This is another important reason to have accurate photometric data about lights, so that you can potentially mix and match different brands and be confident that they will work well together. 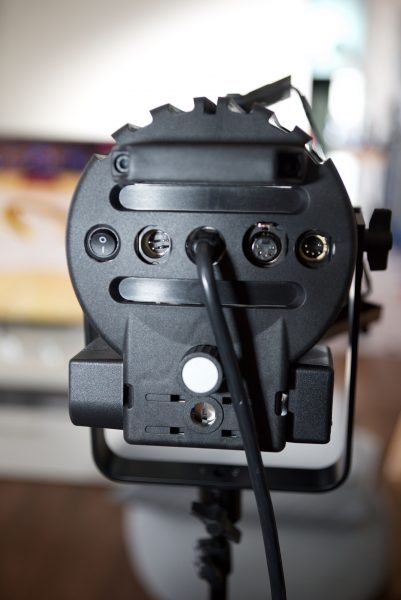 I love the lightweight construction and easy to use controls on the DayLed 1000, it’s easy to transport, easy to set up and power and easy to use. I think the main strength of this light is its versatility, as it is often difficult to find a fresnel light source that you can power off any camera battery and that is light enough to carry around.

The DayLed 650 3200K and the DayLed 650 Dual Colour are also nice fixtures, but I did find that the 3200K version, despite its high CRI readings was a little disappointing when it came to power output.

Overall the DayLed series from Lupo are pretty impressive given their relatively low cost. They are well built, lightweight and offer good performance for LED fresnel fixtures. I would definitely recommend having a look at the DayLed series if you’re looking for a portable, battery powered spot and flood capable LED light.