What used to be a niche is now the norm. Even if you didn’t think mobile journalism would affect your news site or television day job, your employers may disagree. I’m just back from Dublin and the second Mojocon – the world’s premier mobile journalism conference – and this year it was buzzing. It wasn’t just about the number of major news organisations and institutions attending the event, run by Irish state broadcaster RTE, but the presence of so many manufacturers, who clearly believe there’s serious business to be done.

But while the tech may be allowing us to do amazing new things, from VR to live streaming from our phones, it brings up a whole load of ethical and legal issues which we need to address. In this Teradek live panel discussion, which I hosted at Mojocon, BBC staffers Marc Settle and Nick Garnett and new media guru Christian Payne enthused about what’s happening – but also warned of the challenges ahead. The BBC are already further down the road than many broadcasters, having rolled out mobile journalism across the corporation.

“Twelve months ago people were a little bit startled, because they didn’t realise what was possible,” said Nick, a BBC Radio 5 Live correspondent. “This year so many more people are getting it. I’m having so many fewer conversations that are ‘What do you do? and How do you do it? And Is it possible?’ and now people are exchanging ideas and I’ve been learning as much from them.”

He added: “What really strikes me is that there are a number of high end companies involved. The big manufacturers have realised that this is firstly somewhere they can make money and secondly they can bring in their expertise. That wasn’t around last year…[There are] things like livestream and video that are not like livestreaming [for] social media, but really high end.”

But he pointed out that livestreaming competitors needed to find their USPs and address issues such as latency and the need to have audio as well as video streams. And on the journalism side, even the most enthusiastic adopters “get to the point where we think: We’ve only got 24 hours in the day; we’ve only got two hands…and I’m trying to do as many different things as possible. You’re going live; streaming at the same time…creating multi-layered images with logos and text…and then you’re wanting to do 360.” 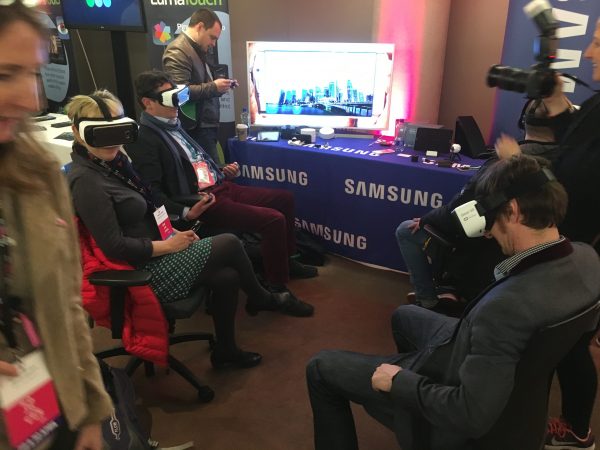 Marc, of the BBC academy, said VR was “probably the most exciting technology that is now becoming affordable and available for the individual to do something with”. He said people now needed to get their heads around the challenges it posed. “[It’s an] entirely different form of storytelling; narratives that work on television are not appropriate to 360 or to VR,” he pointed out. Journalists need to learn where the tools work for a story – and where they don’t – he said. They also need to get to grips with the fresh challenges these technologies pose in terms of issues such as respect, permission and copyright. He was also sceptical about suggestions VR take-up will exceed smartphone usage, asking whether the majority of people were really willing to shut themselves off to the outside world.

“Everyone is leaping onto VR…I bought myself a little 360 camera and am very quickly realising there are niche instances where this is amazing; there are other times when you just wished you hadn’t bothered,” said Christian.He pointed out that the intense competition in the industry raises new challenges for journalists as platforms come and go: “My old newspaper began in 1604 and had an incredible archive of stories. Which of the corporate entities loking after our stories right now can say yes, we will look after your cultural history?”

There may be even more to talk about at next year’s Mojocon given how fast the industry is developing. “The pace of change I can’t see settling down any more…Next year we’re going to see faster cameras [on smart devices], the technology being so much superior…The question is, are people going to be able to take advantage of the new technologies to tell the stories in the way they want to?” asked Marc.

Incidentally, on the livestreaming front, the whole panel was mixed live using the Teradek Live:Air app on an iPad Pro and streamed directly to YouTube live. It’s something that would have required thousands of dollars in kit just a few years ago; pretty impressive for an app that starts at less than $100.