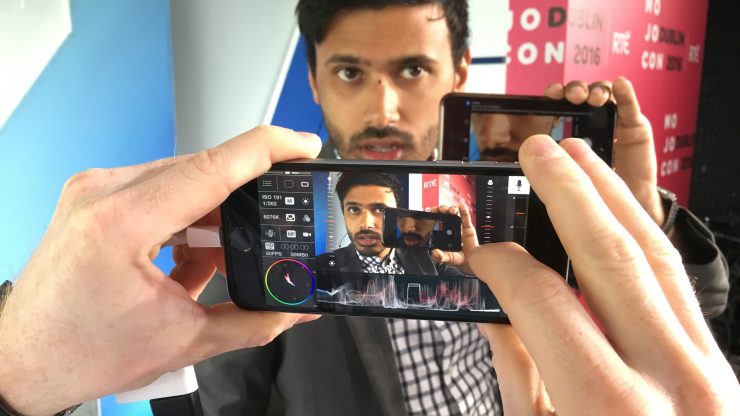 The first time you see the screen of Mavis you would be forgiven for thinking you are looking at the display from the viewfinder of a digital cinema camera. There is a waveform monitor, vectorscope, false colour and a very nice peaking function.

At the Mojocon mobile journalism conference in Dublin last week we took a closer look at the new Mavis iOS camera app with one of its creators Patrick Holroyd. He joined myself and fellow present Yusuf Omar in the Teradek live show booth to talk about it. (Apologies, you need to skip through to the 0:50 mark where the interview begins).

The aim of the small University based team that made the app was to create a professional video app for use by filmmakers. It has an interface that allows for easy adjustment of manual focus via a slider and a very nice peaking option that helps you see when the subject is in focus. There is also a waveform and vectorscope, audio level meters, plus the option for false colour too. Pretty impressive from an app.

You can set shutter speed manually and use ISO (gain) to adjust the exposure (although you will need some kind of neutral density filter to keep the shutter speed down in bright conditions). Both are displayed on screen. You can also set a custom white balance, or choose a preset instead. 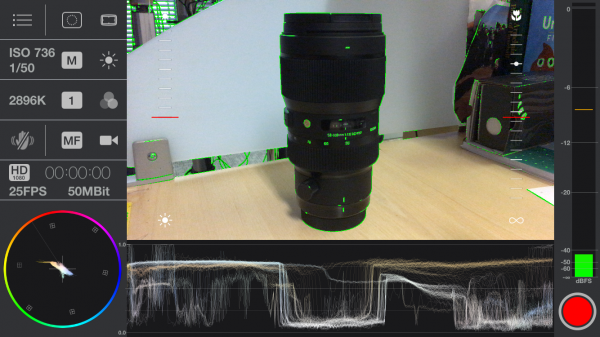 Importantly Mavis offers a range of NTSC and PAL frame rates and resolutions. For PAL users there is the all important 25P in both HD and 4K. At the moment the bitrate tops out at 50 Mbps for both resolutions. 120fps 1080P and 240fps 720P slow motion modes are also an option.

You can choose to record the videos directly to the camera roll (with a short delay for processing), or into the app’s own library for export later on.

Obvious comparisons will be drawn to market leader FilMic Pro, which until now has been the go to app for many iPhone shooters. FilMic currently offers higher bitrate 100 Mbps 4K recording and a wider range of aspect ratios. It can filp the image for use with a 35mm adapter and the ability to record audio at 48.0 kHz. Focus is set using a reticle which you place over your subject that can be locked – you cannot at the moment achieve focus pulls in the same way that you can with Mavis. Some users will find the FilMic interface less intimidating, but users of professional cameras are likely to be more at home with Mavis.

So far in my testing Mavis has proved pretty stable. The company say they will be adding to the feature set and making improvements soon. I’m impressed with what I’ve seen so far. The best part about Mavis is the price – just £12.99. You can find out more on the Mavis website.

If you haven’t already noticed the Mojocon live panels were mixed live using the Teradek Live:Air app on an iPad Pro and streamed directly to YouTube live. It’s something that would have required thousands of dollars in kit just a few years ago; pretty impressive for an app that starts at less than $100.