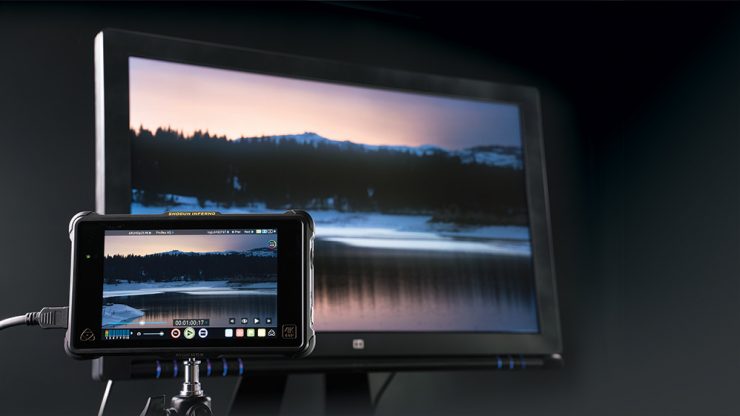 Atomos has announced the Shogun Inferno external recorder, just hours before the opening of NAB. The Inferno features the same 1500nit/10bit/HDR display as the recently launched Shogun and Ninja Flame. Where it differs is with its recording capability: the Inferno can record 4K 60p over Quad-SDI, and also features playback and editing functionality.

The Inferno also adds:
• High quality 4K 60p, HD 240p ProRes and DNxHR recording, from either a video or Raw signal – aimed at sports broadcasters and slow-motion recordings
• Raw to Raw CDNG recording up to 4K DCI/UHD 30p or 2K/HD 120p. CDNG support will also be added to existing Shogun Flame, Shogun and Shogun Studio products a month after the launch of the Inferno.
• Quad SDI connections allow you to use inputs from cameras with 1.5/3/6/12G SDI outputs without the need for converters – perfect for 4K HDR multicam events
• PQ (ST-2084) input allows you to use Inferno as a grading monitor in post
• PQ (ST-2084) output standard HDR to compatible TVs and monitors

The Atomos HDR lineup has also expanded to include HDR as a free update to the Blade HD series, Ninja Assassin, Shogun and Shogun Studio.

The Samurai Blade, Ninja Blade, Shogun and Ninja Assassin will benefit from a free upgrade to the AtomHDR image processing for the 400 nit, 8-bit displays. This is possible because Atomos control both OS and the LCD display engine, allowing previous generation HD products to receive this for free. This gives a preview of the results of post-production HDR in the field, making it easier to judge exposure when shooting in Log. The free OS upgrade for Blade, Shogun, Ninja Assassin and Shogun Studio is scheduled for May 2016.

One slight wrinkle: An 8-bit 400nit display cannot technically display HDR. When we spoke to Atomos about this, they did admit that this new firmware enables what they are calling ‘Mid HDR’. This will allow users shooting in Log to monitor an image that has slightly higher dynamic range than a normal Rec.709 signal. According to Atomos, you should be able to see around eight stops of dynamic range, which is roughly two stops more than you could see using a Rec.709 compliant LUT. It will be interesting to see just how well this actually works. Without having seen the new firmware running on a older Atomos device it is hard to say.

“The best technology booms are the ones that truly wow long-standing professionals. HDR on the Atomos products leaves even the most experienced video professional excited, like a kid in a candy store. Never before have you actually been able to monitor and shoot what you are actually seeing,” says Jeromy Young CEO and Co-founder. “Just as we opened up the changeover from MPEG to ProRes and the upgrade from HD to 4K, we’re focused on ensuring the exciting breakthrough that is HDR easily becomes part of every filmmaker’s arsenal. To do this all at 4K 60p is a real revolution.”

Newsshooter will bring you in-depth coverage of the Shogun Inferno from NAB, when we’ve had a chance to take a look at a unit on the show floor.