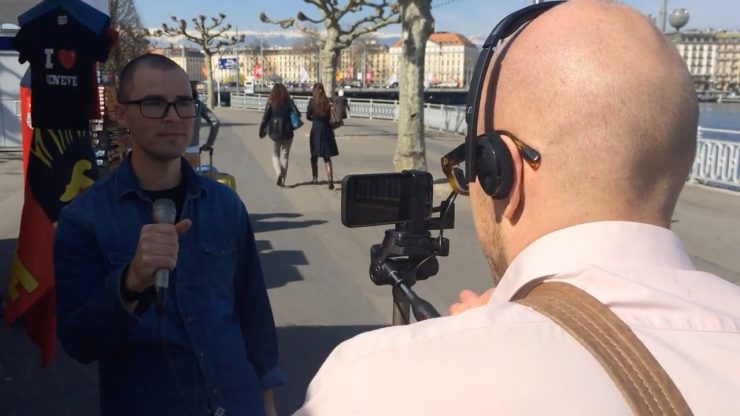 If your opinion on the quality of video shot on mobile phones has not changed in the past two years, you probably haven’t been paying attention. There are several trends converging which is making it impossible, even for the skeptics, to ignore the impact mobile devices are having on the video news business.

The strange thing is, the arguments I am hearing echo almost exactly the ones I heard in the early 2000s when I first became a video journalist. I now train journalists around the world in shooting and editing with their mobile devices. The main accusation I hear wherever I go is “you’re killing quality!” It’s like groundhog day. When I first filmed for the BBC on my Sony PD 150 camera I was confronted by angry technicians after one news programme. “Your camera is not broadcast quality!” they fumed. The fact that I had been the only one to capture a very emotive story about a missing child did not seem to enter into the equation. It was all about the DV 4:2:0 colour space and how my camera wasn’t capturing all the colours as well as it should.

In late April mobile journalists from around the world will gather in Dublin for the world’s biggest mobile journalism conference, Mojocon. Many will be able to tell similar stories of how their work is criticised because their phone is seen as a poor quality tool. While some of these arguments may have some validity on a purely technical basic (although viewers care far less), there are a number of drivers which will wash away these objections. It is similar to how a video journalist using a Canon C500 will no longer be told, like I was, their camera is not big enough to be considered a “proper” camera. The same will happen for mobile and here is why:

There are between 4 and 5 billion mobile devices in the world and this number is still growing fast. If you are working on research and development for mobile devices there is a massive financial incentive to invest in making them better. Compare these massive numbers to the number of ‘professional’ cameras sold each year. This means the accelerated advances in mobile devices will create a world where the professionals no longer have the monopoly on good equipment. Apple’s Tim Cook told the programme 60 Minutes that Apple has 800 people working on the iPhone camera. 800 is enough to fill a good sized theatre. Imagine what the cameras on these phones will look like in five years’ time.

I won’t insult your intelligence by making a long case for why there is an increased demand for video. With social media, more mobile devices and audiences loving video, it is a no-brainer. The problem is that budgets are not rising at most news organisations. When I do speeches or training, it does not matter if I am in Kuala Lumpur, Cape Town or Dundee I hear the same message. Money is tight, but demand for video is high. Everyone needs a mobile phone to do their normal job, so why not make greater use of what you already have to meet those demands for more video? Once people master how to shoot specifically on a phone, they can get great results. Your phone can also quickly create multi-media, social media and live content.

3. Audio is no longer the Achilles heel

When journalists first started shooting video on their mobile devices there were limited audio options. Visitors to Mojocon will see from the exhibitors that this has now changed. The standard of microphones has improved and there are also fantastic interfaces with traditional XLR-based audio tools. The mobile audio industry has grown up. There are new bluetooth-based microphone set-ups and Apple’s new lightning adapter will allow better connections to powered audio mixers. There is still room for improvement, but the audio captured on smartphones is no longer the weak link.

4. Android is catching up

Ask any app developer about creating an App for Android and you may see a troubled, distant look in their eyes. While Android has lots of benefits, the big problem is that there are so many Android devices, with different specifications and operating systems, it makes it hard to create stable apps that will work across all those devices. This is one reason many of the best video apps, such as Filmic Pro, have started life on the iOS platform. There are a smaller number of Apple devices, they all use the same operating system and they’re also much more likely to be running the latest version.

With attempts to reduce fragmentation on Android, as well as the passage of time, Android video apps are improving rapidly. Apps like Kinemaster have updated to give impressive functionality, such as an upper video track for overlays. Cinema FV-5 does a great job as a camera app, but again it depends on which Android device you have. The hardware on Android phones is often fantastic. Now the apps are catching up, there will be many more affordable phones which can be used for mobile journalism.

5. The audiences are going mobile

I will not get into the vertical v horizontal video debate, but it does go to the core of another trend. Audiences are increasingly consuming content on mobile devices. That means it is often easier and more effective to create content on mobile for mobile. For many news organisations it’s about reaching out to audiences on whatever platform they are on and pulling them back to their core content. To do this you need to be able to create content on Vine, Snapchat and many other platforms. For this, your professional big camera is unlikely to be the best solution.

4K is actually not that new for users of Sony phones alongside many others. The iPhone took a bit longer to join the party but now it is on board. I realise there are different types of 4K, but quite frankly when I present footage at the Eurovision Academy in Geneva, they kindly provide a massive 4K television. The smartphone footage looks amazing. You can zoom in on a 4k image and still provide HD quality, but what is more exciting is where we are going. In the future, dual-camera systems will allow flexibility to adjust the image in post. 360° video attachments will also become common. In short, the future for smartphone video quality is very bright.

If you had told me when I was using a prosumer camera at the BBC that we would be shooting 4K on our smartphones, I may have believed you… but I would not have believed the timescale it would take to happen. All the trends are in favour of mobile phones increasingly becoming a professional video tool. That is not to say other cameras will die away, but this new tool will sit alongside them, instead of being seen as a poor imitation.

So when everyone gathers in Dublin for Mojocon, it will not be to mark a passing fad or to argue about bitrates. It will be to discuss how we can use these fast-evolving technologies to make something people might actually want to watch.

Mark Egan is a mobile journalism consultant and trainer. He was one of the first BBC journalists trained to self-shoot and edit their own stories and worked across a range of news and documentary programmes. Since leaving the BBC Mark has trained hundreds of people, from broadcasters, newspapers and NGOs, in mobile journalism skills. He is a faculty member of the Eurovision Academy and also speaks on the topic of mobile content at conferences worldwide.