Frame.io has officially launched a real-time collaboration layer for Adobe Premiere Pro, that has been nearly 1 year in the making. Forget what you know about the original version of Frame.io, this is an entirely redesigned and reengineered application for Adobe’s Panel architecture. It blends the Frame.io functionality directly inside Adobe Premiere Pro so there is no need to go back and forth between two applications. 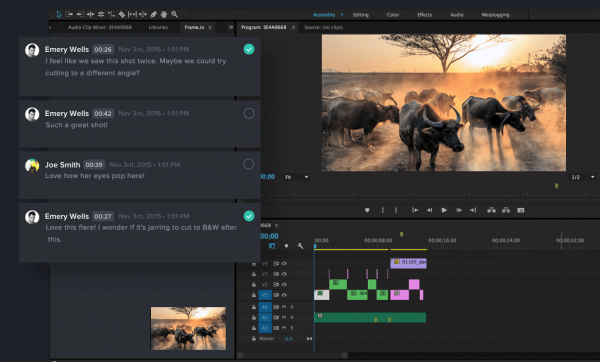 Some of the features include:

Shared Cloud Bin
Where editors, producers, and clients can all access the same media from an interface designed specifically for them.

Branded Presentations
Create beautiful presentations of your finished work that you can share with clients, or the world. No login required.

Version Management
Whether you’re uploading version 2 or version 17, we keep you organized with auto versioning.

Frame.io for Adobe Premiere Pro CC is free to try and comes standard with any Frame.io subscription. You can download the trial for Mac or Windows here.