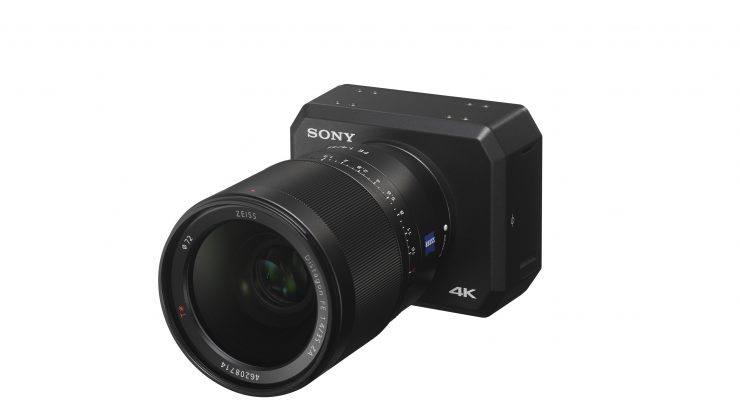 Could this be the ultimate in car rig cameras? Sony have announced the UMC-S3C camera, which fits a full-frame 35mm 4K sensor into a tidy box with an interchangeable E-mount and SD card slot for recording media. You could almost think of it as a ultra-miniaturized α7S II.

Image playback will be possible via connection to a PC and there’s an HDMI out for monitoring – no word yet on whether this signal will also be suitable for recording from, either in terms of bit depth or overlays. Internally there will be both 60Mbps and 100Mbps 4K recording options, the latter in Sony’s XAVC S format.

No dimensions yet, just the promise that it will be “the most compact camera in Sony’s full-frame line-up.” The body is set to feature integrated mounting points and users can control the camera via a multi terminal, micro USB compatible device, remote control or compatible software. The camera is very light and weighs in at approximately 400g.

According to Sony, the camera can achieve the highest sensitivity in its class – under 0.004lx, with the ISO expandable from 50-409600. Sony uses area-specific noise reduction that selectively divides images into areas based on patterns. Image quality is said to be further enhanced through detail reproduction technology, allowing clear and sharp video recording in near pitch-black environments beyond the capabilities of the human eye.

Sony have a range of uses in mind for their new camera: “disaster response; wildlife monitoring; landscape mapping or surveying; surveillance, inspections and investigations; live camera; and as a dashboard/professional point-of-view camera.”

Supporting multi-camera systems, the UMC-S3C fits into nearly any existing infrastructure and also allows playback functions with the use of a PC as well as Live View via HDMI.

Long-duration video recording is also possible as the camera is equipped with a memory card slot on the camera body instead of network cabling. With a 64GB memory card, users can record up to 125 minutes of 4K footage at standard quality (30 fps/60 Mbps). There is no mention of whether the camera can record 24 or 25p frame rates, or if it will be a world camera that lets you switch between NTSC and PAL.

If it turns out to be easy to rig, Sony’s diminutive new camera could be a high-quality upgrade to your action cam set up – and the full-frame sensor will make it much easier to get an undistorted wide angle field of view.

Nailing focus and rolling shutter are the obvious areas it could struggle with, and there’s no word on price yet – but Sony will have the camera on show at NAB later this month and we’ll be sure to report back from the show floor when we’ve been able to take a closer look.

Sony’s UMC-S3C is planned to be available in the United States in August 2016.