We featured Hedge for Mac on Newsshooter a few weeks ago, and today the copy and verification program is available to download. If you’re not familiar with Hedge for Mac, it streamlines the process of importing data from cameras. Hedge creates multiple copies simultaneously, and guarantees every copy is bit-for-bit perfect.

Hedge can import files while verifying others, as well as autolaunch AppleScripts, to process your footage or connect it to an existing workflow. The program is compatible with all regular hard drives as well as media such as REDMAGs, CF(ast), XQD, SxS and P2 disks etc. If your Mac connects to it, Hedge can work with it. 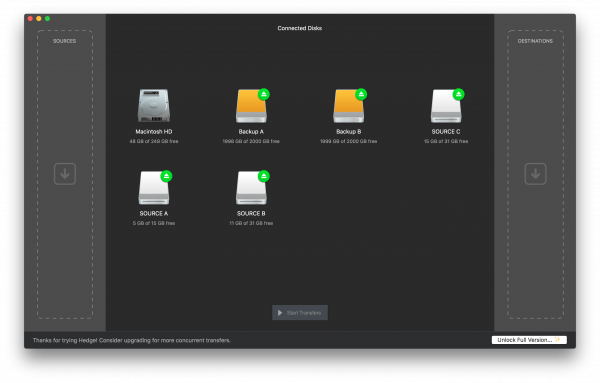 Hedge for Mac costs $15US a month or $150US for a year outside the EU, €15/€150 within the EU. This way EU businesses can get a direct VAT deduction at checkout. There’s also a free version, which is fully featured, but limited to two simultaneous transfers. Subscriptions can be paused or cancelled at any time. All future updates are included within the subscription price. Hedge are offering an exclusive 33% launch discount for Newsshooter readers which you can access here. UPDATE: Due to the great demand for the product Hedge is now available at a fixed price. Regular pricing will be $99US, with an introductory price of $59US. 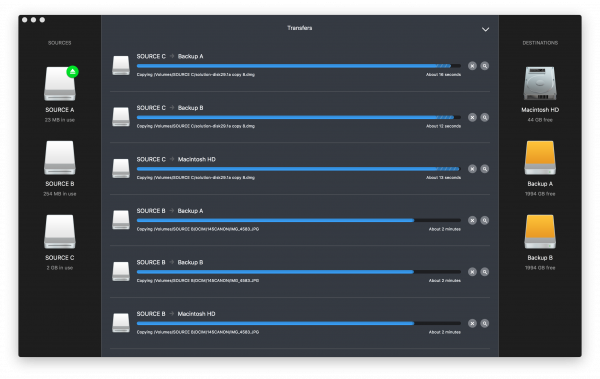 The program has been in beta since September last year and today’s public release (Version 1.0), has new features that are the direct result of feedback from beta testers. I have been using the program for several weeks and have been very impressed by its simple-to-use interface.

This from the Sync Factory:

Interface
Navigate to your Destination folders from the disk menu. Transfers show what file their working on, and what they’re doing. Disks in the Connected Disk view now sort a lot nicer.
’All transfers done’ is a modal now.
Double clicking a disk opens it in Finder.

UX
You can’t accidentally use an blank Folder Format.
Destination folders are hidden from the disk menu on Sources. Disks in Sources and Destination are now sorted on add.
Much clearer ‘disk is almost full’ alert.
You now get an alert when the disk permissions might be set wrong.
No more autocomplete when renaming disks.
Add ‘Open in Finder’ button to duplicate destination directory error. Improved the free and used space indication.
When importing less than 1 GB disk space shows MB (or even KB). Certain disk menu items disable based on disk type.
Show a label when a disk is busy ejecting.
‘Start Transfers’ is now ‘Show transfers’ when there are active transfers. Rename disks from the disk menu too.

The paid version of Hedge for Mac can be downloaded here. Purchases through FastSpring are for a personal license and are valid for every Mac that one personally owns. Also, if you’re not satisfied with the purchase, Hedge for Mac will refund you.