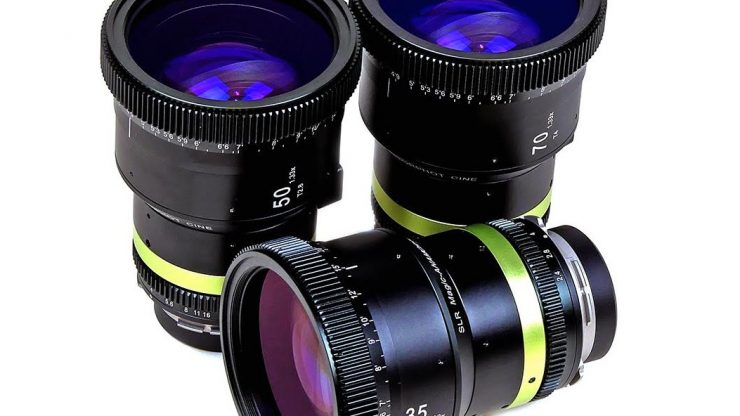 As more and more Hollywood movies are shot with high end Anamorphic lenses, independent filmmakers and those on more limited budgets have sought to re-create the popular look. Hong Kong based SLR Magic are one of the companies at the forefront of making lower priced Anamorphic solutions. Their Anamorphot adapters that mount onto regular stills lenses have proved popular.

Last year the company launched several dedicated MFT 2x Anamorphic cinema lenses designed primarily for the Panasonic GH4 and its 4×3 mode. Today they have officially introduced three more anamorphic cine lenses that have a PL mount and a lower 1.33x squeeze factor. These are designed so that users of the 16:9 sensor cameras can easily squeeze the image vertically to achieve the desired 2.35:1 aspect ratio.

These are not going to be as inexpensive as the adapters. The lenses have anamorphic optics, a dedicated taking lens and a built-in focussing diopter. These are all cased in a solid cine lens chassis. Fit and finish is excellent. Expect to pay several thousand dollars per lens when they ship.

Usually a lower squeeze factor has resulted in a less pronounced elongated bokeh effect. The original SLR Magic 1.33x adapter did not have the same look as a 2x anamorphic lens. The new 1.33x cine lenses use special techniques to try and mimic the look of a 2x anamorphic. As you can see from the screen grabs below the results are pretty impressive.

Each of these lenses is a single focus optic which is focussed via a ring at the front of the lens. There is filter thread on the lens front but the barrel rotates when focussing which rules out the use of screw-in variable neutral density or polarising filters. To use ND you need to either use fixed strength screw-in filters or a mattebox solution.

Close focus on most anamorphic lenses is notoriously far away. The 1.33x Anamorphot CINE lenses have a close focus of 3ft 6inches, which is pretty good by anamorphic standards.

All three lenses work on a Super35 sensor. The 50mm and 70mm will also work with a full-frame sensor. Even though 50mm doesn’t sound very wide, the field of view horizontally is actually wider than when shooting with a regular 50mm spherical lens.

The PL lens mount on the lenses can easily be adapted to fit other common mounts like Canon EF and E-mount. I tested the lenses on a Sony a7R II during a recent trip to Hong Kong and had no problems using the lens via an adapter.

The lenses have blue streaks and flares but these are not as crazy and obvious as with some previous SLR Magic designs. However, if you do want to create the JJ Abrams Star Trek flare effect than you can play to your heart’s content by shining a light into the lens at an angle.

1.33x might not be as fashionable as 2x in cinema circles, but the oval shaped bokeh and flares from the new SLR Magics are very nice indeed. The ease of use and editing of 16×9 material when shot with the 1.33x Anamorphots is undeniable.

This from SLR Magic: