Amimon have today announced a smaller, lighter version of their CONNEX HD 5GHz wireless downlink system. The new CONNEX Mini is designed for zero latency (less than 1ms) monitoring in 1080P HD from cameras on smaller drones. The connection to the camera is via HDMI.

The CONNEX Mini transmitter weighs 60g and is less than half the weight of the original version. The receiver is also smaller and lighter too, weighing in at 140g. The trade-off is that the range in line of sight (LoS) is halved from 1000m (3300ft) on the original, to 500m (1600ft) on the Mini. The units are powered using DC sources ranging between 6 and 28V.

Amimon see the CONNEX Mini being aimed at people who fly smaller drones and need to keep weight to a minimum. However, I’m not sure how many of those users would be prepared to sacrifice the longer range for the 70g weight saving. Being HDMI only also limits the CONNEX Mini’s uses – without a SDI option it will need a SDI-to-HDMI convertor to use it on some higher end cameras like the ALEXA Mini. Adding an additional box and the extra powering would likely negate any weight saving over rival units.

Being HDMI only also limits its appeal to anyone looking for an on-set or news wireless solutions where SDI is the norm. 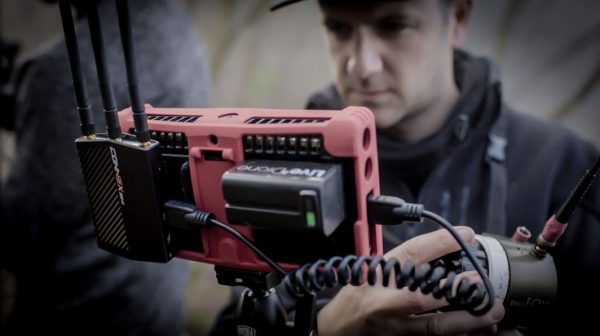 Many professional drone operators had been expecting a smaller unit but with the same range as the original. This not being the case it is hard to see it being adopted in this market.

Users of drones from DJI like the S900 (with Zenmuse gimbal) have the option of using DJI’s Lightbridge instead. Given the similarity in price it is hard to see who the CONNEX Mini is actually aimed at given DJI’s dominance of this space.

On the plus side the Mini is competitively priced at $1299 US and starts to ship very soon. For more information keep an eye on the Amimon website.