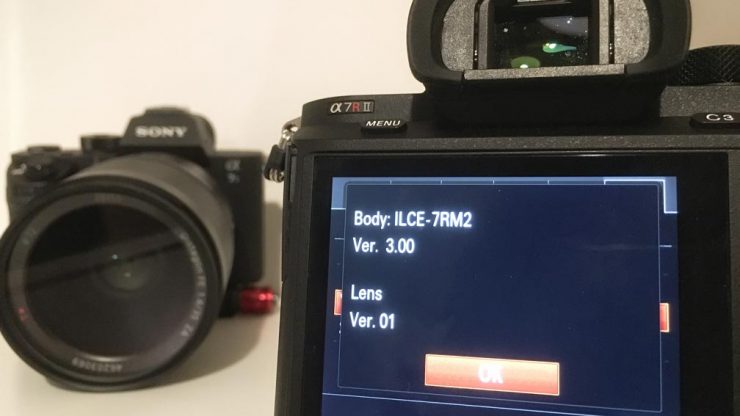 Sony’s a7R II and a7S II are great cameras, but they have had one major weakness – they overheat when used for extended periods. In my testing with both cameras they have stopped recording before the theoretical 29min 59 sec limit on a PAL version of the camera. The worst case scenarios seems to be if you shoot internally-recorded 4K handheld run-and-gun in warm conditions and use the image stabilisation. Longer times can been achieved by shooting on a tripod without image stabilisation, but the cameras still have a tendency to just give up and often need to be left to cool off for a while before recording can resume.

Last week Sony quietly released the new version 3.00 firmware for the a7R II and version 2.00 firmware for the a7S II that aim to make things a bit better. The a7R II has benefitted the most. Multiple reports have confirmed that the camera can record Super35 crop 4K internally for extended periods without overheating. Paul Antico of Anticipate Media told me he had managed to run the camera for 3.5 hours without overheating. Other bloggers have had similar results and so far I have not managed to make mine overheat either. This is great news and really makes the camera much more usable as your main camera, or as a B-cam for interviews.

Quite how Sony are achieving this fix is unclear. It could be that they have simply decided that it is OK to run the sensor hotter and that their previous temperature limit was too conservative. Alternatively they have done something clever with the way the camera actually works – although this seems less likely. It will be interesting to see how much the noise from the sensor increases over an extended shooting period.

Both the a7S II and a7R II also get a little help in full-frame mode. Recording times are extended before overheating, but only if you use the VG-C2EM vertical grip. I don’t have one of these so have been unable to tell how big an improvement it is.

This utility updates the ILCE-7RM2 system software to version 3.00, and provides the following benefits:
Improvements over version 2.00:
• Improves 4K movie recording time when using the vertical grip (VG-C2EM) or when the APS-C/Super35mm mode is activated
• Improves picture quality
Benefits provided by previous updates and included in version 3.00:
• Adds the selectable feature for uncompressed 14-Bit RAW image capture
• Adds support to output video via HDMI during use of the Remote Camera Control software (still mode only)
• Reduces the chance of the camera changing to front focus when shooting certain scenes.
• Note: This symptom rarely occurs.
• Decreases chroma noise when Long Exposure NR (Noise Reduction) is set to Off.
• Note: The noise does not occur when Long Exposure NR is set to On.
• Improves continuous shooting at Hi speed so that it can be used just as long when using the flash as without the flash.