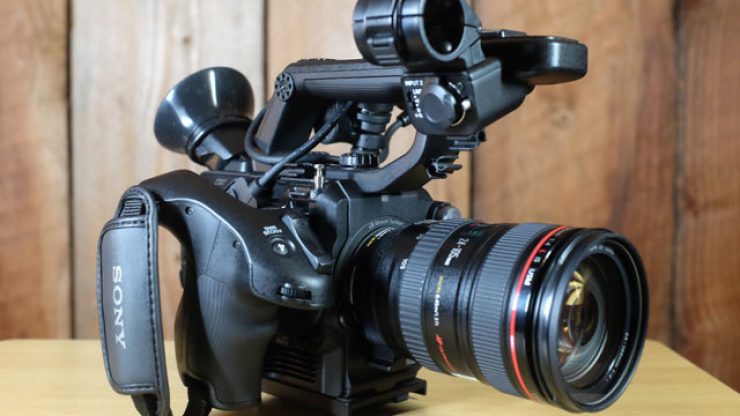 For me, ergonomics and ease of use in a fast-paced professional doc environment are the biggest priority when I’m thinking about cameras, which is why I’ve used the C100 for a few years now (I have three of them). Small rigged-up Sony a7 cameras and the FS7 just haven’t done it for me, but a few hours with the FS5 and I’ve already decided to sell the Canons and move all our productions to it.

In HD, the FS5 has the C100 beat in just about every aspect, except autofocus. The AF on the Canon cinema cameras is really, really good, and on the Sony it’s just too slow and unpredictable to depend on. However, AF on Canons work best on the new fly-by-wire STM lenses, and to be honest those lenses are really not that great to use so you sacrifice a lot in order to get the best autofocus performance. Because the FS5 has only mediocre autofocus, it makes for an easy lens decision – leave the kit 18-105mm lens behind and use a Canon 24-105mm with an E-mount adapter. It feels good to get back to manual focus anyway.

Other than the autofocus, in HD the FS5 has better color depth than the C100, a better bitrate, it has a better and more flexible LCD/EVF system, it’s fully compatible with external recorders like the Atomos Ninja (in 8-bit HD), and it has slow motion. These are things C100 users have been hoping to get for years. For gimbals the FS5 is lighter and has internal audio (unlike the C100 mk1), the LCD is removable to mount elsewhere on the gimbal, the handgrip uses a standard LANC cable compared to the C100 which only has one grip extender option through Zacuto (which is great but has a fixed length). Sadly, autofocus on the C100 makes it a killer gimbal cam, but I think the FS5 has a lot of other things going for it, for gimbal use.

Handheld the FS5 I think is much better and more stable than the C100, in part because the C100’s rear LCD prevents you from resting it against your body for stability. But it also has just a great feel to it, even with the forward heavy 24-105mm lens. In other good news, the Miller & Schneider C-Cup (built for the C100) actually works as a perfect eyecup for the FS5, since it’s fairly rigid as a point of contact, compared to the stock eyecup that bends back anytime you put pressure on it. The FS5 can only use the LCD or EVF at a time, so an easy solution is to select LCD in the menu (rather than auto sensor), and then simply turn off the LCD’s on/off switch anytime you want to use the EVF. This makes the FS5 a pleasure to use handheld.

I haven’t done any audio tests. But, the option of the Sony wireless system with built-in power via the MI shoe is a nice feature – plus there’s a few easy places to mount a radio mic receiver on the FS5 handle.

As for picture / color, other people can speak about color science and DR better than I can, but shooting from the hip, the FS5 looks to have better noise in low light than the C100, it has more options in terms of flatness vs baked in profiles, and whereas the C100 is absolutely brilliant in outdoor daylight, indoors it always has a terrible yellow tint that is hard to get rid of, so I for one am looking forward to embracing the “Sony look.”