Japanese company Activ Lab had a range of very cool products on their booth at Interbee this year. One of them was a converted electric vehicle fitted out with a custom shooting mount that had a DJI Ronin attached to it. Inside the car there was full monitoring and control units for setting up your shot. 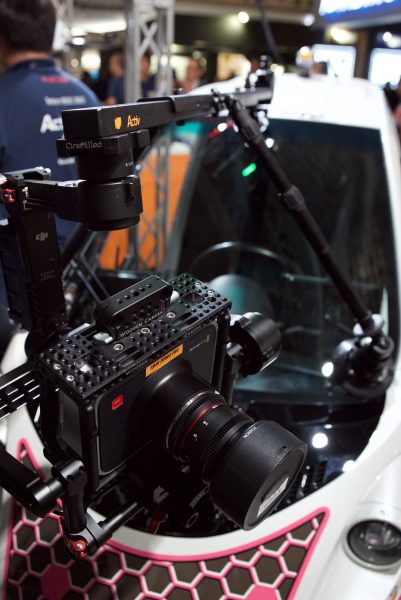 Activ Lab had built their own fully adjustable mounting system that looked to be quite easy and fast to set up. Based on a suction cup mounting system, it featured adjustable arms that allowed the user to change the height and length of the mount depending on what shots were required. The electric vehicle was only capable of speeds up to 60kph and Activ Lab were quick to point out that it was only suitable for use on smooth surfaces. They also wanted to stress that the camera would be operated by someone in another vehicle as the electric car is only a one seater and it would be dangerous to try and drive and operate the camera by yourself.

Activ Lab were also showcasing a vast array of prototype filming equipment including a quadcopter with a 360 degree camera array as well as larger models that could accommodate 8K cameras.

Also on display was a new rain deflector that featured a brushless motor to limit the amount of noise that is produced. If you are not familiar with how a rain deflector works it is a piece of glass on the front of the camera that spin at 5,000 rpms, that instantly moves water away from the lens. These are normally incredibly loud to operate and can cause problems when wanting to capture location sound at the same time.

There was no indication of pricing or when any of these new prototype devices will be available to purchase. Keep an eye out on the Activ Lab site for more information.

I will leave you were some shots of other products they had on display at their booth.