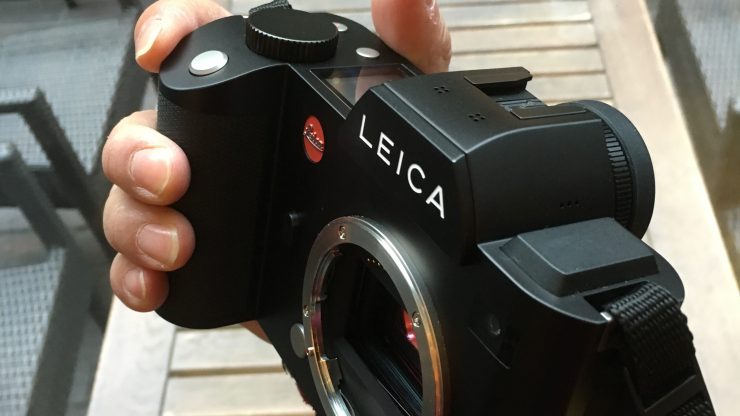 The Leica SL (Typ 601) mirrorless camera is due to hit the shops any time now. It is Leica’s first attempt to create a high end stills camera that is also capable of producing professional 4K video. With a body only price of $7,450 US at B+H it is around two and a half times more expensive than the class-leading Sony a7S II.

So have Leica’s engineers got it right? I’ll talk about the layout and handling of the camera in a moment but let’s start with the bad news. First reports online indicate that they perhaps haven’t quite figured it all out yet. Andrew Reid over on EOSHD.com was first to discover that there were some strange things going on with the Leica Log gamma. It was supposed to create a more gradeable image in post production, but it seems that Leica managed to achieve the opposite. Log curves are supposed to be flat, but it seems the Leica version is so flat that it makes grading difficult, perhaps impossible. According to Reid the blacks when shooting in Leica Log seem to start at “100 on the 0-255 luma range”. Unless Leica intentionally made their Log mode totally unlike any other Log out there, then it looks like something is very wrong.

For a second opinion I turned to Nick Driftwood, well known as the creator of the Driftwood settings for the hacked GH2, who is an expert in such things. Using footage from a second Leica SL from a different source he was able to verify Reid’s findings. This is what he reported back:

Andrew Reid of EOSHD.com recently reviewed a Leica SL601 in their Berlin store and discovered something very strange was going on with the company’s implementation of Log. Andrew suggested “I first noticed it with the lens cap on that the blacks in LOG mode seem to start around 100 on the 0-255 luma range. This makes the footage essentially ungradable, severely limits dynamic range and is an obvious flaw. Who does Leica have testing the video features!?”

I couldn’t help but follow this up myself and after looking at Reid’s downloadable files from his Vimeo page I too found it impossible to grade correctly using Blackmagic’s Davinci Resolve colour grading software. Barely believing my eyes I asked London’s Park Cameras to send me a few sample shots in 24p 1080, 25p & 30p 4K from their demo SL (Typ 601). From this I was able to confirm that something was not right; On the 1080p 24fps video sample you can see what’s going on and it’s not right for such an expensive camera. The picture is extremely flat – almost unshootable – even with their magnificent EVF (there’s no built-in LUT or view assist function). I brought the images into Davinci and found the histogram of all videos came in at 50 to 100%, and the waveform parade data falls between 512 and 1023. Davinci’s Curves or luminance tonality (zones of lightness or darkness) has to be set from Neutral steeply in at 50% with a sloping curve towards 11 to bring back the blacks (see picture – lower-left = black point through the upper-right = white point).

This little test backs up the suggestions made by Andrew Reid that perhaps the SL 601 is unusable in its current state for proper grading of video and that maybe their engineers should take a look at their figures. Analysing Log material from other cameras it appears that Leica are leaning +255 data values towards white, generating a well washed out Log look at 512 to 1023 in these 8-bit recordings. Maybe Leica could enlighten us? Do they have some kind of groundbreaking discovery? I would love to hear what their engineers have to say about their Log profile. Strange…

This is something that I have now been able to verify on the camera I tested. This is a third camera and not the same as either Reid’s or the one that Park Cameras used. I was told it was the same as a final version. Again the results in Log mode are unbelievably flat and you can download them yourself to confirm (you need to be logged into Vimeo to do this).

So assuming that this Log issue can be solved, or if you are only looking to shoot in standard Rec. 709, the how does the rest of the camera shape up?

The build quality is truly excellent and the design is clean and modern. It is far bigger and heavier than competing mirrorless cameras. It’s built from solid metal and dwarfs cameras like the a7S or GH4. The grip is lovely and the moment you touch it you feel the quality. I did find the camera getting a little weighty when handholding for any period of time and the setup is not well balanced with the 24-90mm on the front. Perhaps using Leica M or R lenses with the appropriate adapter would be easier to hold.

The design has some elements that are great for video. In the base of the camera there is a tripod socket that has an additional locator pin that helps to prevent the camera from accidentally wobbling loose from a tripod plate.

The 4 million pixel EVF is a thing of beauty. It is amazingly clear and it is easy to see what is going on. I had no problem adjusting the built-in diopter to match my ageing eyes. If only all EVFs were like this. It has peaking and also the ability to magnify to check focus. Switching to Log mode makes things impossible though, the image is simply too flat to see what is going on. Unlike the Sony a7S II there seems to be no view assist or lookup table (LUT) for the in-built EVF and rear screen.

A full range of resolutions are available. 4096×2160 DCI 4K is available at 24P, as well as 3840×2160 UHD in 25P and 30P (but strangely not 24P). To use these the camera needs to be set to S35 crop mode. Full frame shooting is restricted to HD resolutions sadly. There are two SD card slots in the camera which is a great feature.

In addition to the Leica Log there is also a standard gamma setting which has adjustments for contrast, saturation and sharpness. You can see and download a quick 4K clip shot below:

The 24-90mm f2.8-4 lens is beautifully sharp and renders images that are punchy and with classic Leica colour rendition. For video the downsides are the lack of constant aperture, and also the lack of any focus scale or witness marks on the barrel. This is a strange choice for a system that is trying to appeal to video users.

The settings are accessed via several buttons that you can configure to do different things and bring up different menus. These are not marked by default and so at first glance you have no idea what each does. I’m sure that this won’t be a problem for regular users who get used to the way they have configured the camera, but for video users who may only be renting or borrowing the camera for specific shoots it is bound to cause confusion.

To make matters worse several items need to accessed by multiple presses of the same button. There are not enough custom buttons to allow every key video setting its own dedicated button. The designers wish for a minimalistic layout are at odds here with the needs of video users.

The simple LCD display on the top of the camera is nice though. It shows the exposure mode and also the distance that the dedicated lenses are focussed at in manual focus (as this is not on the lenses themselves).

External audio is via an optional adapter which I haven’t seen. There are also internal mics on the top of camera. Gain settings seem limited.

Timecode is shown in the menu. I assume this is for internal recording and output over HDMI, as there is no obvious way for it to receive timecode from an external source.

The battery is substantial and is secured using a two stage release system. There is a lock, then you have to push the battery down to spring it out.

So the camera as a whole is beautifully made but perhaps not as quick to get around as a camera like the Panasonic GH4. The image has the potential to be really good, but we will have to wait and see if Leica address the issues that have been identified. Only then will we be able to really tell if the camera is worth the premium over the Sony Alphas or GH4.