Today Blackmagic Design released new firmware to update their Video Assist external recorder. This adds several new features that were missing at launch that turn the Video Assist into a more usable monitoring device. These include a 2x magnification to check focus, zebras and also the ability to adjust peaking.

Overview
At first glance the Video Assist looks to tick a lot of boxes if you’re in the market for a compact, affordable HD monitor/recorder. It offers a five inch 1920 x 1080 touchscreen display and records 1080 HD 10-bit 4:2:2 video (via HDMI and 6G-SDI inputs) at up to 60fps. It records Apple ProRes in proxy, LT, 422 and HQ flavours to affordable SDHC/XC memory cards – expect to get around 1.25 hours of Apple ProRes 422 HQ on a 128GB card. Avid DNxHD recording is also promised via a firmware update.

The Video Assist has a very solid, clean design. It weighs in at 12.77 oz (362.02 g) and has a metal chassis and plastic back. It features multiple 1/4 20 mounting holes as well as a built-in kickstand for sitting the unit on a desk or flat surface. The screen recognises which way up it’s mounted and flips automatically to the correct orientation, very handy if you’re mounting it on your rig or gimbal and want to quickly reposition it.

The unit can be powered off dual Canon LP-E type batteries that are hot swappable, a very nice touch. There’s also a 12V barrel connector to power it externally.

The headline feature of the Video Assist is the price: the Video Assist retails for $495 US – squarely aimed at the budget end of the market where a lot of shooters will want to use it with smaller video cameras and DSLRs.

It’s not without its faults though. The magnification is good but there seems to be no way to move the magnified area around the screen at present. Also there are no option to load lookup tables (LUTs) to aid viewing when shooting in a flat or Log profile. The screen has limited colour and contrast controls. Hopefully these functions can be added or enhanced via firmware.

The screen is also highly reflective which makes working outdoors a little tough – something that the Video Assist shares with the latest Atomos and Convergent Design recorders, as well as monitors like the Small HD 502. There is no sun hood provided although I’m sure third party vendors will be quick to make them. The other thing to be aware of is that the Video Assist uses mini DIN 1.0/2.3 SDI connectors which are smaller standard SDI connectors. There aren’t any of the special SDI cables in the box and they aren’t the easiest to come by.

There is a 3.5mm headphone jack for audio monitoring, but there is no separate external audio input option – the only sound comes over the HDMI or SDI connections. I found no way to set audio levels on the unit, or adjust balance between channels.

The unit has a fan inside that runs most of the time. There is no way to switch it off. In most situations it will not be bothersome, but in a quiet room in may be audible. I also wouldn’t recommend getting the unit wet, and covering it with a rain cover could be problematic if you block the fan’s ventilation holes.

Potentially even more of an issue is the fact that there’s no way for the Video Assist to do a 3:2 or 2:2 pulldown on the interlaced output from cameras like the Sony a7S. Even though some (mostly Sony) cameras are set to shoot progressive, they output the image in an interlaced signal over HDMI. Recorders from Atomos and Convergent Design deal with this by applying a pulldown to the signal, converting it back to progressive before recording. The Blackmagic doesn’t do this so you will likely need to configure your edit software to handle it. If you’re shooting to edit yourself this isn’t the end of the world, although it does add another step to the post production process. It’s something to bear in mind if you’re handing over footage to be edited by someone else though – you’ll have to make sure whoever’s supervising the editorial process knows they’re receiving progressive footage recorded in an interlaced form.

And it doesn’t seem like there’s a quick firmware fix for this: Blackmagic have pointed us towards their rackmounted Teranex Express as a solution to the pulldown issue. Which is possible for studio-based workflows but not really an option for use in the field with small cameras.

For some owners the pulldown issue isn’t going to be a problem. If you have a Panasonic GH4, Canon DSLR or other camera that output a true 23.98 or 25P progressive signal over HDMI then the Video Assist will work well. If your camera does not then you might want to look at other options first.

Recording can be set to automatically trigger via SDI commands or timecode – although without the mini SDI cables we haven’t been able to test this yet. The new version of the software also sees HDMI timecode. Even so, it doesn’t seem like there is an option for the a7S I tested to trigger recording when the internal recording starts – something that Atomos recorders do.

Another thing you’ll need to be careful of out in the field is the fact that there’s no cover on the SD slot to protect it from the elements, or stop it from accidentally being popped out. It is also a little fussy about which SD cards actually work so make sure you check which ones are compatible and test them first.

To access the setting menus, or remove the overlays for a clear view, you need to swipe the screen the same way you do on your iPhone. This is a mixed blessing as I found you can accidentally alter screen settings when actually trying to come out of the menu.

The zebras can be set between 75% to 100%. The peaking highlights edges in green and has three levels – high, medium and low. I found focussing with the peaking worked quite well but I wish there was a choice of colour it uses.

There is a histogram but it is tiny onscreen and is not marked with IRE values. Unlike other recorders the waveform cannot be expanded to occupy a larger part of the screen when setting exposure. There is no vectorscope or false colour setting.

Of course not every monitor in a production needs to have all those extra features and the Video Assist should work well as a monitor for gimbals, Steadicams, or other uses where the operator isn’t the person doing the focussing (or using autofocus). It could also be useful for directors or clients to keep an eye on things.

Second opinion:
DP Peter Barta recently tested out the Blackmagic Video Assist (Using version 1.0 firmware) and was kind enough to offer his perspective. Peter is a very experienced Steadicam and Mōvi operator who has worked on films such as Mad Max Fury Road and San Andreas. He was looking for a lightweight monitor and recorder for use on a Mōvi while shooting for TV.

I first saw this little gem at SMPTE this year and when I heard the price, I couldn’t believe it! Blackmagic were kind enough to send me a loaner to try out so I mounted it on the Freely Mōvi M5.

I wanted to use this for my Mōvi M5 work for TV that only required delivery of HD1080p. The bright, sharp five inch 1920×1080 resolution display is the big draw for me. It handles the outdoors pretty well but it could do with a hood attachment. A big plus, especially at such a low price point, is being able to record ProRes to fast SD cards. I wanted this for some small TV jobs where I would usually mount a Canon 7D Mk II (for its autofocus tracking capabilities) and record to an external recorder. I’ve also owned a Ninja Star but unless you buy the Atomos Cfast 1.0 cards the Cfast experience is an expensive one compared to SD cards. Plus although the Ninja Star has a size advantage it’s only a recorder, not a monitor.

I usually run a SmallHD on my Mōvi but I thought if I could reduce the weight and have one device to do the job of a recorder as well as a monitor I’d be happy. It only weighs 362grams and has so many mounting holes I thought it would leak so there’s plenty of ways to get it where you want it. It has all the codecs you’d need, and you can use the mini SDI connectors to monitor a UHD signal.

The touchscreen is easy to use, but make sure you read the instructions which are on an SD card. The touchscreen allows you to swipe across or up/down to select, change or clear the overlay display which is very easy once you know how. There are also audio meters, frame rates, resolution, timecode, source, histogram, card and battery display. 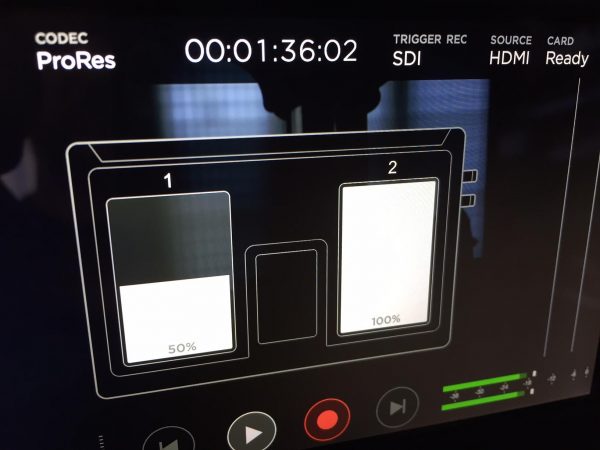 I think when they designed the Assist they must have bought a lot of LPE-6 batteries! Although it has dual LPE-6 slots and a lovely graphic to show battery status they only last for about an hour at best. You can either buy shares in Canon batteries or do what I did and get a dummy Canon battery adapter to D-tap and power it from a larger power source.

Anyway, for my money I’ve opted to get a Blackmagic Video Assist, it’s a very well-built unit and has a kickstand for when you just want it to look pretty on a table. So check it out: not a bad combo for the Freefly Mōvi or any camera package with HDMI or SDI which doesn’t record ProRes internally.

Our verdict
The Video Assist is a good first effort from Blackmagic that will suit users who are looking for the cheapest all-in-one Full HD monitor/recorder solution and don’t need 4K. Construction is first rate and SD cards are inexpensive.

Taken solely as a professional monitor it has great resolution and a useful set of tools thanks to the latest firmware upgrade. That said a dedicated HD monitor from SmallHD, Transvideo or Marshall will have more features like waveform and vectorscope, albeit at greater cost.

As a recorder it works well as long as your camera outputs progressive over HDMI, or you actually want to shoot interlaced with a Sony (yes some people still do). It is also impressive to get both SDI and HDMI on the same recorder at this price point. That said, if you want internal pulldown or need features like audio control you are better off with something like an Atomos Ninja Blade. I also think Blackmagic should have used standard SDI connectors or included mini SDI cables with the unit, given almost no one will have any sitting around to use.

Ultimately though if you can work around its quirks the Video Assist is a well-made unit that has a lot of potential, at a very reasonable price. The form factor is great and the size matches the new generation of mirrorless camera well. For $495 US it makes for a cost-effective solution for anyone looking for a way to record ProRes and monitor at the same time.

You can find out more about the Video Assist on the Blackmagic Design website.