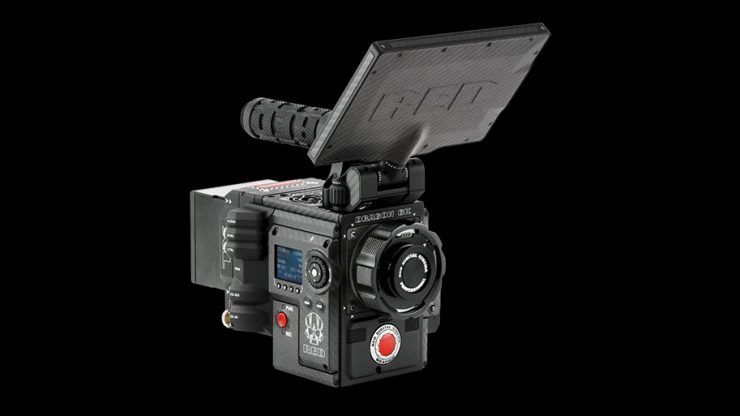 Phil Holland has taken delivery of a brand new RED Weapon camera and has wasted no time in testing it against the older RED Dragon. There has been a lot of debate online over how much dynamic range the RED Weapon can actually record. Phil is involved with RED but has recently published his own independent testing over on the RED User forum. We are republishing his findings here with his permission.

This from Phil: “I was beginning to feel something was a bit different. Then after further digging and getting intimidate with the camera I discovered there indeed was a difference in the total captured dynamic range between RED Epic Dragon and Weapon. It seems that RED has found a way to get a bit more out of the sensor, the most obvious changes are a slightly lower noise floor and a bit more highlight detail retention. Which essentially equates to more Dynamic Range.”

“That got me curious enough to test this. First and foremost I’d like to thank Stacey Spears and SpectraCAL for the use of their Xyla-21 Chart. This allowed me to compare my normal “patch reading” method of measuring Dynamic Range and the Xyla-21 Chart’s individual steps for additional confidence in the results. I did a great deal of work here. Reading individual patches, masking off sides of the chart to eliminate glare, composting results, OLPF noise comparisons, gamma experiments, etc. But there’s certain information that I feel is very important towards the practical and technical ways of shooting that I want to share. And I think this not only effects Weapon, but likely other upcoming DSMC2 style RED cameras. The results found here are accurate within a tenth of a stop.”

Here is the rest of Phil’s post from RED USER:

What Can Weapon See?
Well that was my first question and I wanted to see exactly what I could dig out of a Weapon image and the Xyla-21. Which led to a rather ludicrous ISO 102400 pushed test using frame averaging. 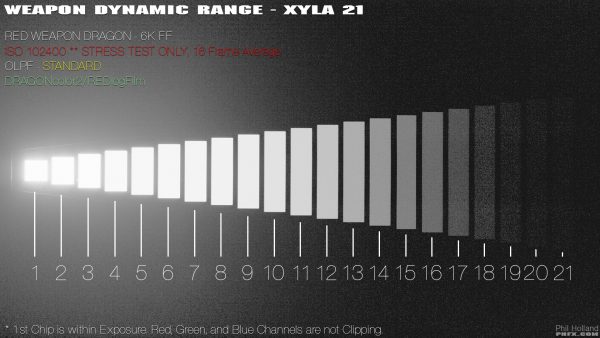 Remember this is a stress test, but yes, Weapon can indeed “see” all 21 stops amazingly. Are those “Usable Stops”? No, not exactly, but it does tell a bit of the story.

Something to remember through all of this, when you see these Xyla-21 frame grabs and graphics all of the images are exposed to not clip in Red, Green, or Blue Channels. Meaning that first cube isn’t thrown away and is a “counted stop”.

Recommended ISO Range:
To date RED has recommended an ISO Range of 250-2000 on the Dragon sensor. Though the cameras do indeed go up to ISO 12800. While I personally wouldn’t push it that far, after shooting this test footage (specifically the ISO Tests on the Color Chart at the end of the video), you can indeed go beyond the recommended ISO Range and get very usable results.

With Raven on the horizon I feel there’s going to be a new audience who don’t have a full grasp of how ISO and FLUT work on RED cameras. I don’t want to re-tread too much here, but take a look at this graphic if this is new to you.

Long and the short of it, RED cameras capture all the potential Dynamic Range possible for a given scene and exposure. RED doesn’t apply any in camera noise reduction as they want to maintain the most possible Dynamic Range, Detail, and Color Information without losing it to aggressive lossy image processing techniques.

Total Captured Dynamic Range:
RED has famously received a bit of criticism about the 16+ stops of Dynamic Range of the Dragon sensor, but it’s something that I’ve been able to measure in the past. 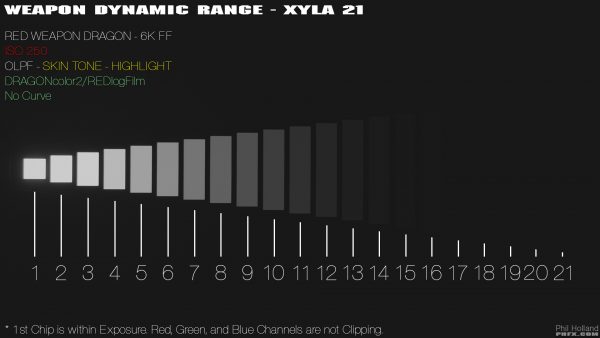 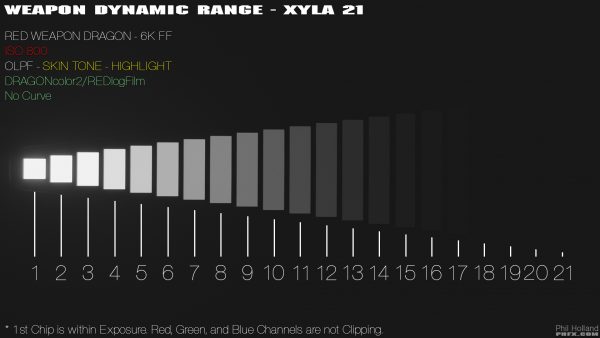 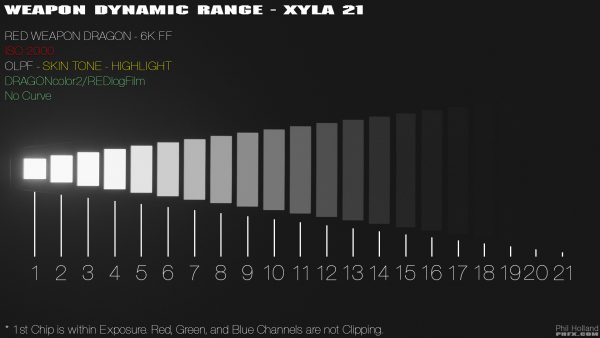 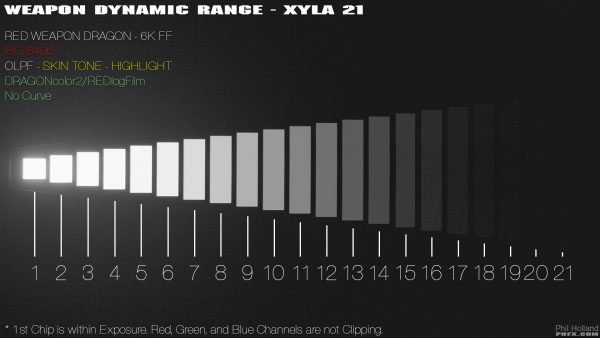 So how much dynamic range does Weapon have? For me if we are talking within the recommended ISO range of ISO 250-2000 up to 17-20 captured stops. Those stops nearing the noise floor aren’t going to be the cleanest, but they are part of the shadow roll-off and reflect what is captured in camera.

To show the dynamic range properties more clearly, here’s an image of the Xyla-21 with each ISO rating shown in REDlogFilm: 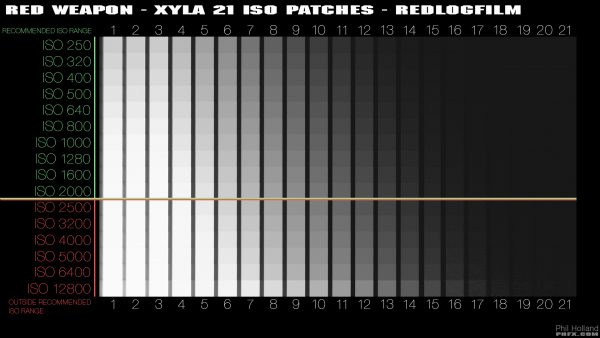 There are slight differences between the OLPFs however.

All 3 OLPFs “see” about the same into the dark. However, the Low Light Optimized OLPF for instance is cleaner in the shadows when compared to say the Skin Tone – Highlight OPLF or Standard OLPF. The other big difference is how each OLPF’s properties effect the Highlight Roll-Off. Also, possible Optical Artifacts are reduced the most with the Skin Tone – Highlight OLPF at the cost of a slightly noisier image.

Here’s a few images that show those differences a bit more clearly: 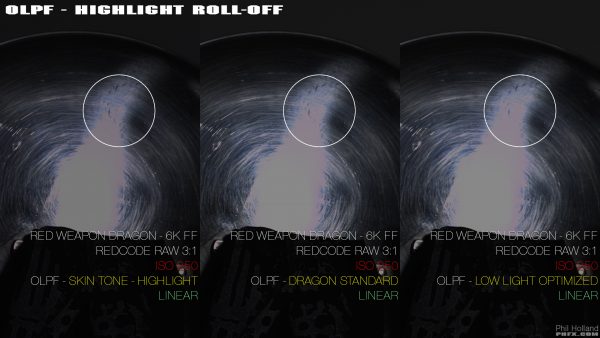 Looking at the brushed steel you can see each of the OLPFs are clipping. Within the circled area you can see the different properties of the Highlight Roll-Off for each OLPF. 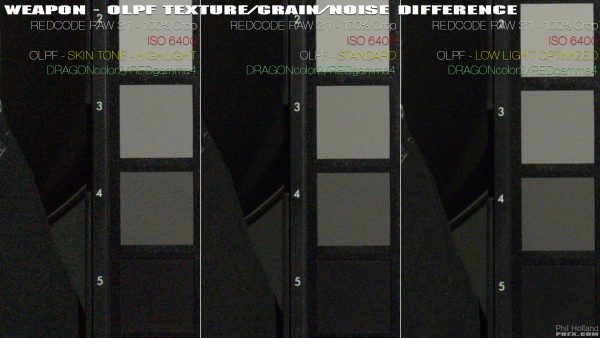 To show off the image texture noise it’s easiest to go to an extreme ISO like 6400 and look at these Middle Gray through shadow tones for each OLPF. Theses are 100% crops of 6K material. The square next to 3 is Middle Gray. You can see that the STH is noisiest, the LLO is cleanest, and the STD is in the middle between them – though closer to the LLO in my opinion in many ways.

Thank you to Phil Holland for allowing us to repost his tests. You can find more out about Phil and his work here.